Wrong Time of Year to Find This... 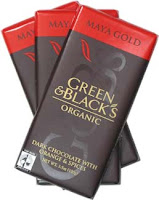 I am a self-confessed chocoholic. I also have very pronounced opinions on chocolate and the relative merits of various brands of chocolate...

...in other words, I aspire to be a gourmand of all things chocolate... an aspiration which I shall never achieve, as, while I have my preferences for particular types of chocolate, I would never turn my nose up and refuse chocolate because it wasn't my favourite choice!

In the British chocolate market, I consider Cadbury's Dairy Milk to be pretty grim. Galaxy is much better - though given Cadbury's standards, that isn't saying very much.

Thornton's caused a bit of a stir (my heart certainly went pitter-pat) when they opened shops dedicated to selling nothing but chocolate, and their chocolate is nicer than Galaxy. Again, not difficult. Unfortunately all their soft fillings get a bit icky after a while. 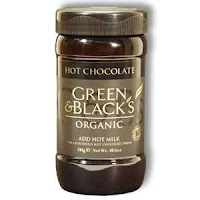 I think that one of the best brands of chocolate available in the supermarkets over here has to be Green & Black's. It is ever-so-slightly bitter, and therefore not as sickly sweet. It's also more satisfyingly chocolatey, and is best savoured slowly, square by square...

So you can imagine how I felt when, doing a spot of grocery shopping (something I loathe), I discovered that Green & Black's do hot chocolate... and none of your "instant" rubbish, either. No, this is the real McCoy, to be made with hot milk. To be fair, whacking a mug of milk into the microwave is just as effective as getting out a saucepan and whisk...

Now why did I discover this just in time for Lent? 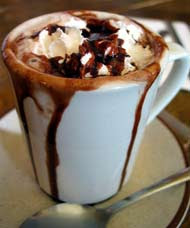 There are some shops in Edinburgh you would love/loathe (depending on the liturgical season). They specialise in just these kind of delicacies!

Yes, but Edinburgh is actually further away than France!

I love the slogan - can't remember the product:

"Do you dream in chocolate?"

"Do you dream in chocolate?"

Heheheh ! I think you'll find it was Lindt!

Why not do extra penance and give up other things instead?!

I have no love of any of those above, because all will result in pain for me. Chocolate gives me migraines and dairy products an attack of something unpleasant that those with lactose intolerance will understand. I suppose I should in fact consider myself blessed.

Have you tried the magnificent choccie delights from www.rococochocolates.com ? They have real shops too on the Kings Road and Marylebone High Street. Heavenly indulgence!
Hotel Chocolat is good too.
Mind, there's nothing quite the same as going into the establishment of a Parisian Chocolatier and having a good deep sniff! (And then bankrupting yourself on the produce....)

As for the season:

"As with most fine things, chocolate has its season.
There is a simple memory aid that you can use to determine whether it is the correct time to order chocolate dishes: any month whose name contains the letter A, E, or U is the proper time for chocolate."

Cocoa is a precious commodity; it should be treated with respect.
Dark chocolate should contain a minimum of 50% cocoa solids.
Milk chocolate should contain a minimum of 35% cocoa solids.
The use of "Fine and Flavour Cocoa" is heartily encouraged.
Non cocoa-butter vegetable fats or "cocoa butter enhancers" or substitutes should not be used in the manufacture of chocolate.
Butterfat should not be used in dark chocolate, only cocoa butter.
We encourage the planting of rare cocoa bean varieties and we are against the large scale planting of cocoa trees which does not follow the principles of bio-diversity.
We are in favour of organically grown and fare traded cocoa wherever possible.


There.
I feel as if I have done my bit now!

Here in the States, we are blessed with Lindt and Godiva shops in every major city. And an organic grocery chain called Trader Joe's has its own brand, which is very nice and very inexpensive, and also carries Scharffenberger, Villars, Ritter, and a few other varieties that are rather nice.