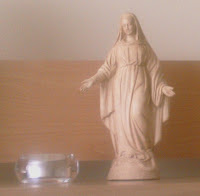 Yesterday's cri de coeur was occasioned by the fact that I finally managed to do some light dusting... the dust in question was caused by the electricians who came along at Easter, but, frankly, housework has been rather low on my list of priorities.
The dusting meant that I needed to rearrange my statues, and I discovered a few which had been put away for safe-keeping, as well as finding a few broken ones (hence the last post) ... a friend has kindly offered to bury the remains of those in her back garden, provided I don't want her to dispose of a life-size Padre Pio (future archaeologists may have quite a conundrum to puzzle over!)
Out of interest, I decided to count my statues: I have 29.
I have 11 of Our Lady: one large plain white pottery Madonna and child, very minimalist; one pottery statue of Notre Dame des Eaux, coloured to look like beige stone (my favourite... a copy of the one in St. Bernadette's convent at Nevers, France, and the one she said most resembled Our Lady... it's in the photo above); a Pietá; two statues of Our Lady of Mount Carmel (one 22 cm, the other about 10 cm); two statues of Our Lady of Fatima (one about 13 cm, the other about 20 cm); one statue of the Immaculate Heart of Mary; one Madonna and infant Jesus; one statue of Our Lady of Lourdes (an unusual one); and, finally, one large statue (about 50 cm) of Our Lady of Grace (the "Miraculous Medal" pose.)
Jesus is next... though I'm not counting the statues where he appears with someone else. I have two statues of the Infant of Prague and one Sacred Heart statue. 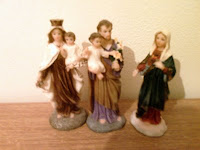 Then there are the saints: three statues of St. Jude; two statues of St. Thérèse of Lisieux; one statue of St. Joseph and the child Jesus; a large statue of St. John Fisher (I was a Form Tutor for 7JF in one school); St. Benedict; St. Juan Diego Cuahtlatoatzin (no, don't ask me to pronounce it...); St. Anthony of Padua; one very minimalist statue of St. Bernadette; St. Patrick; St. Martha; St. Philomena; and, finally, St. Michael the archangel.
I haven't included my four broken statues: two Sacred Hearts, Our Lady of Grace and Our Lady of Fatima. I also haven't included the many statues which I have bought for friends...
The reason I have so many duplicate statues is that I used to have several statues in my classroom, back when I taught RE in Catholic schools. I thought that, as one can't stay focussed on one thing for very long, it would be a good idea to have lots of statues (and pictures) for my students to gaze at when their attention wandered.
Anyway, doing this has given me an idea. We haven't had any memes doing the rounds for a while, so I'm going to start one.
The rules are simple. Count the number of statues in your house (NB. priests are not allowed to count the statues in their church as well as the ones in their house... unfair advantage!!) Describe the statues, and/or put up some photos. Then tag three people. I'm keeping the tag number low so that everyone has a chance to tag someone...
My three nominees:
1) Fr. Ray Blake
2) Paulinus
3) Ttony
Of course, if you feel like playing along, go ahead, and leave a message in the com-box.
UPDATE: I was asked to put up a photo of my statue of St. Philomena by Amanda, whose daughter goes to St. Philomena's school. I'm very happy to do so, as St. Philomena is one of my recent favourites... 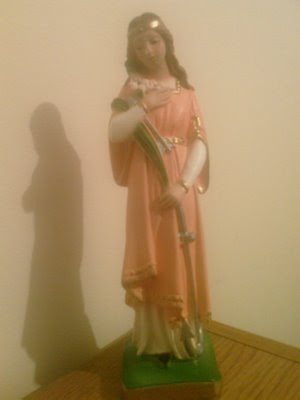 A Question For You...

What should one do with blessed holy statues which are broken, and not suitable for repair? Ideally, I understand, they should be buried... but this isn't possible, unless someone is prepared to do it for me: my garden is a shared one, and digging holes, mole-like, in the turf or flowerbeds will not endear me to my neighbours, nor to my landlord.
Does landfill count?
(And, before you ask, no, that isn't a picture of the statue concerned... )
Posted by Mulier Fortis on 11.6.09 6 comments:

Have You Heard The One About...

My first response when I read about this one was to look for the punchline. Unfortunately, it appears to be true. CAFOD's Hexham & Newcastle Branch have an annual pilgrimage to Holy Island. This year, they have invited a member of the Yanomami índios in Brazil to lead the reflection at key points along the way with reflections from his own tradition, focussing on how we live in harmony with God's creation.
There's nothing wrong or objectionable in listening to what a person from another religion or culture has to say on issues such as climate change and tribal matters... but is it suitable for a Pilgrimage? And leading the reflection??
The CAFOD Diocesan Manager said, "It will be very interesting to hear what he has to say about climate change, and also to hear how his customs value the stories of his ancestors just as he will hear how we revere our Northern saints."
Ummmmm. I hope they've offset his carbon footprint... bringing him all the way over from Brazil is hardly "sustainable."
Twitch of the mantilla to Catholic Action UK.
Posted by Mulier Fortis on 10.6.09 9 comments: 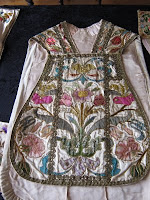 Fr. Ray Blake has unearthed some beautiful vestments which he plans to use for Corpus Christi on Thursday: he has Fr. Seán Finnegan and Dr. Alcuin Reid to act as celebrant and deacon, while he will be subdeacon.
He says that the vestments are terribly worn, and need restoration. I don't know if he has considered adding a PayPal button to his site, but I did suggest it.
Anyway, it sounds as if he's a tad nervous... his Jubilee Mass was the first Solemn High Mass he'd celebrated. Pop on over to offer some encouragement.
Posted by Mulier Fortis on 9.6.09 No comments:

More Evidence To Be Ignored...

The mainstream media are very good at ignoring unpleasant news... or rather, I should say, ignoring news which doesn't support the slant they want to convey (as with HIV/AIDS and condoms.) It is why the interweb-thingy in general (and blogging in particular) is so very helpful.
A lot has been said about the need for research into embryonic stem cell therapies for various degenerative diseases. Opposition to such research is totally inhumane (or so the argument goes) because those diseases are so dreadfully devastating, one has to be totally uncaring, and a right monster, to ignore the suffering... yada, yada...blah, blah...
Of course, what is never mentioned is the inconvenient truth that adult stem cell research is providing lots of indications of successful therapy... while the embryonic stuff has yet to provide any evidence of success at all...
Check out these articles from LifeSite News...
Adult Stem Cells Found to Cure Blindness – Three Patients Cured
Success Stories with Adult Stem Cells Coming in Almost Too Fast to Track
Posted by Mulier Fortis on 8.6.09 5 comments:

... but I just couldn't resist this picture from LOLcats. After the day I've had today, I think I know how kitteh feels... 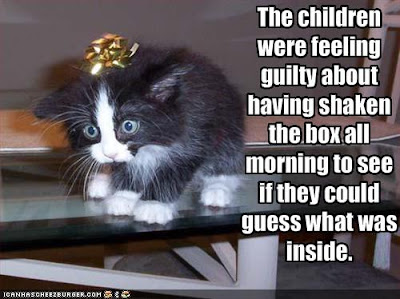 I was just sitting at the computer, blogging away, when I suddenly became aware that I was not alone... I was being watched... 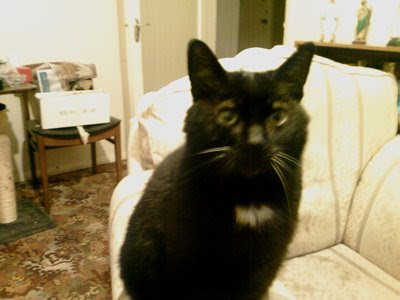 We were privileged to have our usual monthly Missa Cantata on Saturday, with our visiting schola. It was Ember Saturday in the Octave of Pentecost, and so there were five readings before the Gospel... it seems that, traditionally, men would have been ordained to various ministries: doorkeepers, acolytes, exorcists, deacons and subdeacons among them...
We didn't have any ordinations, but one of our servers was acting as MC for the first time, so I took the opportunity to take a few photos. I was impressed to see that, despite several of our usual servers being away, we were still able to field four torch-bearers for the Canon... 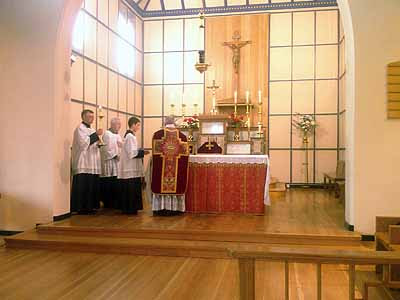 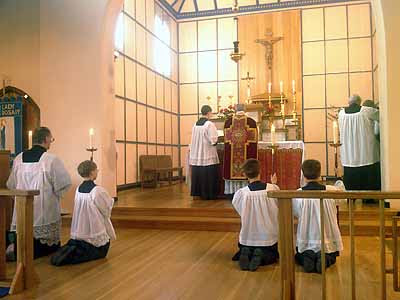 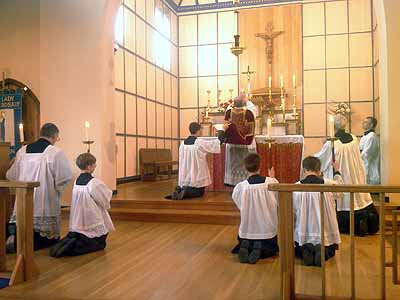 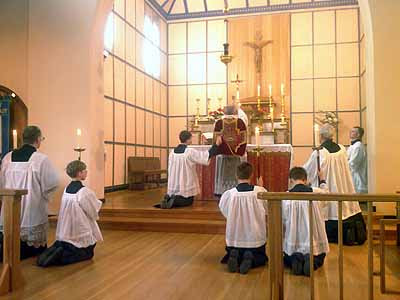 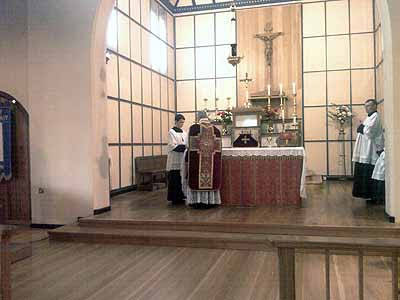 I'm not quite sure what happened to the lighting levels in that last photo...
Posted by Mulier Fortis on 7.6.09 6 comments: