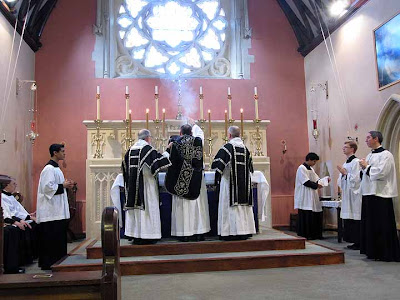 Fr. Charles Briggs, the Parish Priest of St. Mary's, Chislehurst, frequently appears on the internet despite not having a blog of his own - particularly on mine, His Hermeneuticalness' and Fr. Michael Brown's blogs.

Fr. Briggs' church is famous for being the parish attended by the Emperor Napoleon III and the Empress Eugenie when they fled from France, and the Emperor was originally buried in the church before being given a mausoleum at Farnborough. Michael Davis, indefatigable defender of the TLM is buried in the churchyard. It is a beautiful church, but the parish is very small, and doesn't have much of an income.

When the church was redecorated in the 1980s, there wasn't enough money to include a proper confessional, and so they are attempting to raise the funds to put this right. This week's newsletter shows the design for the new confessional, and, although half of the cost has been raised through parish fundraising efforts, there is still another £3000 needed (approximately US $4930, €3607.)

If any of my readers would be willing to help, it would be greatly appreciated - and it would help so many in their experience of this wonderful Sacrament. There is a button for online donations (as well as the address for cheques) on the donations page of the parish website.
Posted by Mulier Fortis on 14.1.14 No comments: 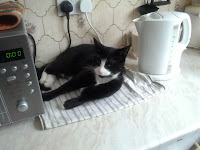 Miaowrini is very much an outdoors sort of cat. She is also one of the clumsiest I have ever seen. As a kitten, she jumped up on the toilet on the one occasion when I had left the lid up, and fell in. She also fell in the swing-bin when attempting to jump over it. And she has fallen in the bath when I was filling it.

It was only a matter of time before she did some damage to herself. On Sunday night she appeared to have major difficulty walking, and growled when I attempted to examine her back legs. Despite the difficulty, she seemed to be ok when lying quietly, and happily munched through her dinner when I brought the bowl over to her, so I decided to keep her in the bathroom and assess the situation in the morning.

She was still unable to weight-bear on the left back leg in the morning, but since she had slept quietly during the night, I decided to leave her in the bathroom until after work. The minute my last lesson had finished, I headed straight home to collect the cat for a visit to the vet.

Miaowrini lived up to her name, miaowing plaintively as I took her out in the cat carrier, though she calmed down once she was in the car. I'd phoned earlier in the day to make the appointment with the vet, so we didn't have to wait too long.

The vet seemed a little puzzled, and called in a colleague for a second opinion. Miaowrini's knee was very swollen and she had a high temperature, which suggested an infection of some sort, and there was no obvious sign of a fracture (my original fear) but the leg was too swollen to be sure. Apparently there is a slight possibility that she had damaged the top surface of the tibia in some sort of fall, but the vets didn't want to rush to give her an anaesthetic for x-rays, and decided that it was better to give her a painkiller and anti-inflammatory and a course of antibiotics. The other possibility is that she's had a run-in with another cat or a fox.

In the meantime, I was to keep her inside and monitor her. If she didn't show any sign of improvement, or got worse overnight, I was to bring her back as an emergency, but otherwise the vet would try and carry out an examination on Friday when the swelling had gone down.

This morning Miaowrini seemed a little more active, though still unable to weight-bear. I was heartened by the fact that she made a break for it when I opened the bathroom door, but it was pitiful to see that she just couldn't manage more than a quick hobble. I was going to keep her in the bathroom for another day, but it occurred to me that, if the pain was less, she might try and jump up on the bath or other slippery surfaces, and I didn't want her to make things worse, or fall.

As a result, I moved all her things into a corner of the sitting-room. Sure enough, as I left for work, I saw her through the window trying to curl up on the (low) windowsill where she could watch what was going on outside.

It's a case of watching and waiting. Fingers crossed that she won't need an x-ray. Prayers would be appreciated (if only to soothe my frazzled nerves!)
Posted by Mulier Fortis on 14.1.14 3 comments: