I realise that you are all probably fed to the back teeth with constant cat reports, but I'm pretty preoccupied with what is happening to Miaowrini, so it's either the cat report or nothing. And several people want to know what is happening, so...

I brought Miaowrini to the vet before work on Monday morning. The idea was that the vet would give her an anaesthetic and x-ray the leg, and then decide whether to strap the leg up or just give enforced cage-rest. It proved to be a stressful day. At break time I got a call from one of the nurses saying that the blood tests were fine and the anaesthetic and x-rays would be going ahead after the morning clinic was finished. At lunchtime I got a call from the vet himself, and his first words were "Don't panic, she's still under anaesthetic and doing well, but..."

The x-rays were not good. Not only was the cartilage at the top of the tibia completely trashed, but so were the ligaments - all of them. The vet told me that he had never seen anything that bad in over 30 years of veterinary practice. He then explained that he'd got out his textbooks to see what the best treatment was - and the textbooks merely confirmed that this sort of damage was a very rare occurrence, and that no-one had agreed on the best way to tackle it, because it was so rarely seen.

The vet then gave me the option of going to see an orthopaedic specialist - which would involve a very long drive, a new assessment appointment later in the week, another anaesthetic for the cat, huge fees (around £3000) up front and no guarantee that it would work. The alternative was that he just give it his best shot then and there.

I opted for the latter - it had the advantage of immediacy, and I don't have £3000 to spend on something which might not work... I then had a whole afternoon of waiting to see how the operation panned out.

At the end of the day I got a call from one of the nurses reporting that the operation was over, and the vet was very pleased with how it had gone. Miaowrini was drugged up to the eyeballs, but was doing well, and had even had a little food - this made me smile: Miaowrini doesn't miss a meal if she can help it. She would be kept in overnight because of the major anaesthetic and the need for heavy pain relief, and would be reassessed in the morning, and if all was well she could probably come home in the late afternoon on Tuesday.

On arrival at the vet, I was told that the total cost was about £1300 (not counting the first two examinations)... only the knowledge that it would be collected directly from the insurance company prevented me fainting, I think. I was given several syringes filled with painkillers (to be administered orally), and instructions on keeping Miaowrini in a cage to prevent her trying to jump up and wrenching the ligaments out of position.

Tonight, Miaowrini made a bid for freedom when I took her out of the cage to allow her access to the litter tray. It was rather heart-rending to see that she couldn't manage the jump up onto the low windowsill. I promptly grabbed her and stuffed her back in the cage - stuffed is the correct term. A cat that doesn't want to go into a cage seems to have more limbs than any normal cat. As you can see from the photo, the cage (on loan from Annie Elizabeth, bless her!) is too small for long-term confinement, and I have to try and find a larger one so that Miaowrini can have her litter tray within easy access, as well as a bit of space in which to walk a bit. That's my next project.

In the meantime, another dose of her painkillers (two sorts) has left her sleepy and relatively comfortable. I prayed my office with one arm in the cage, scratching her ears and feeling Miaowrini purr... hopefully she'll get some sleep. 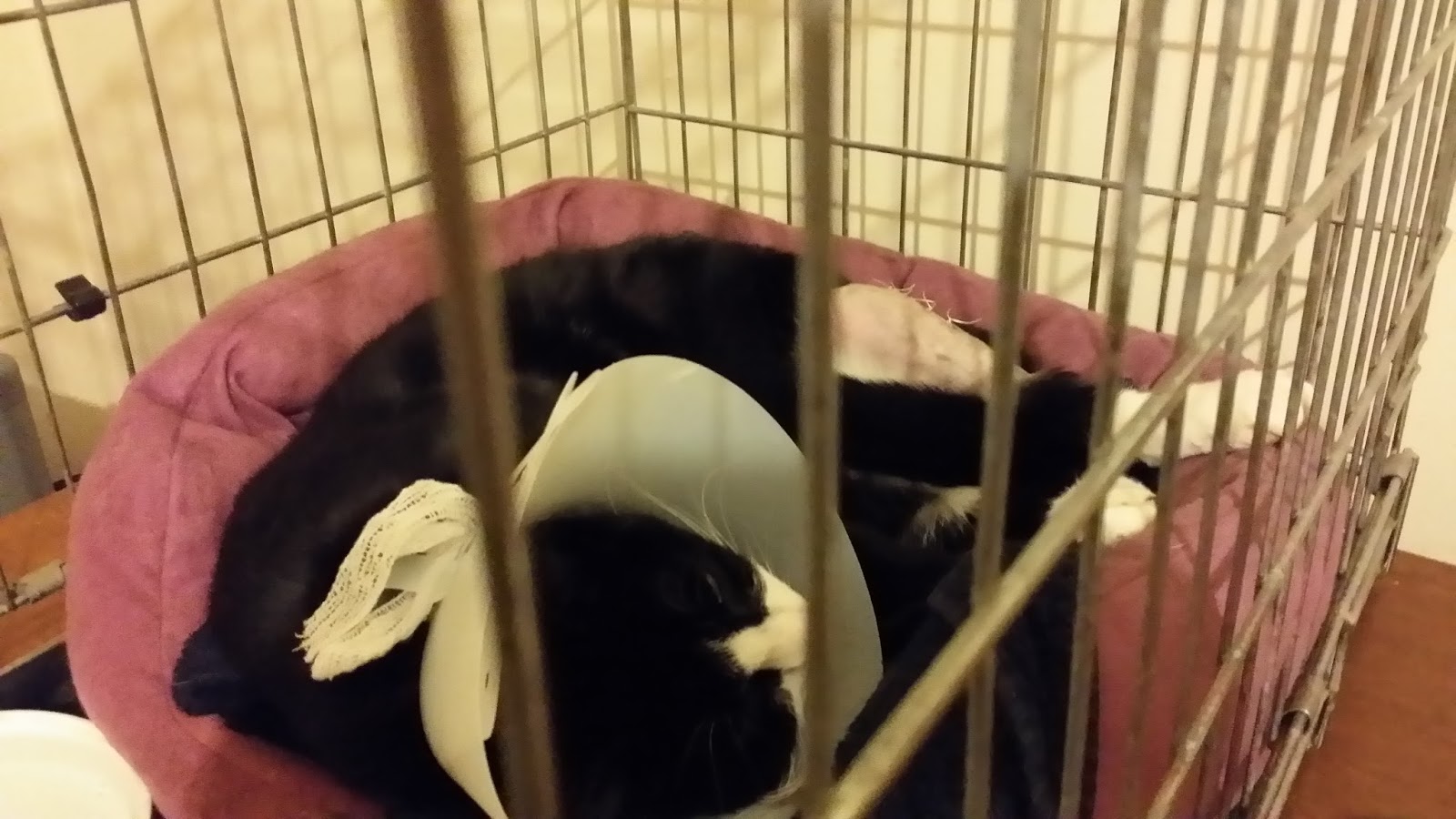 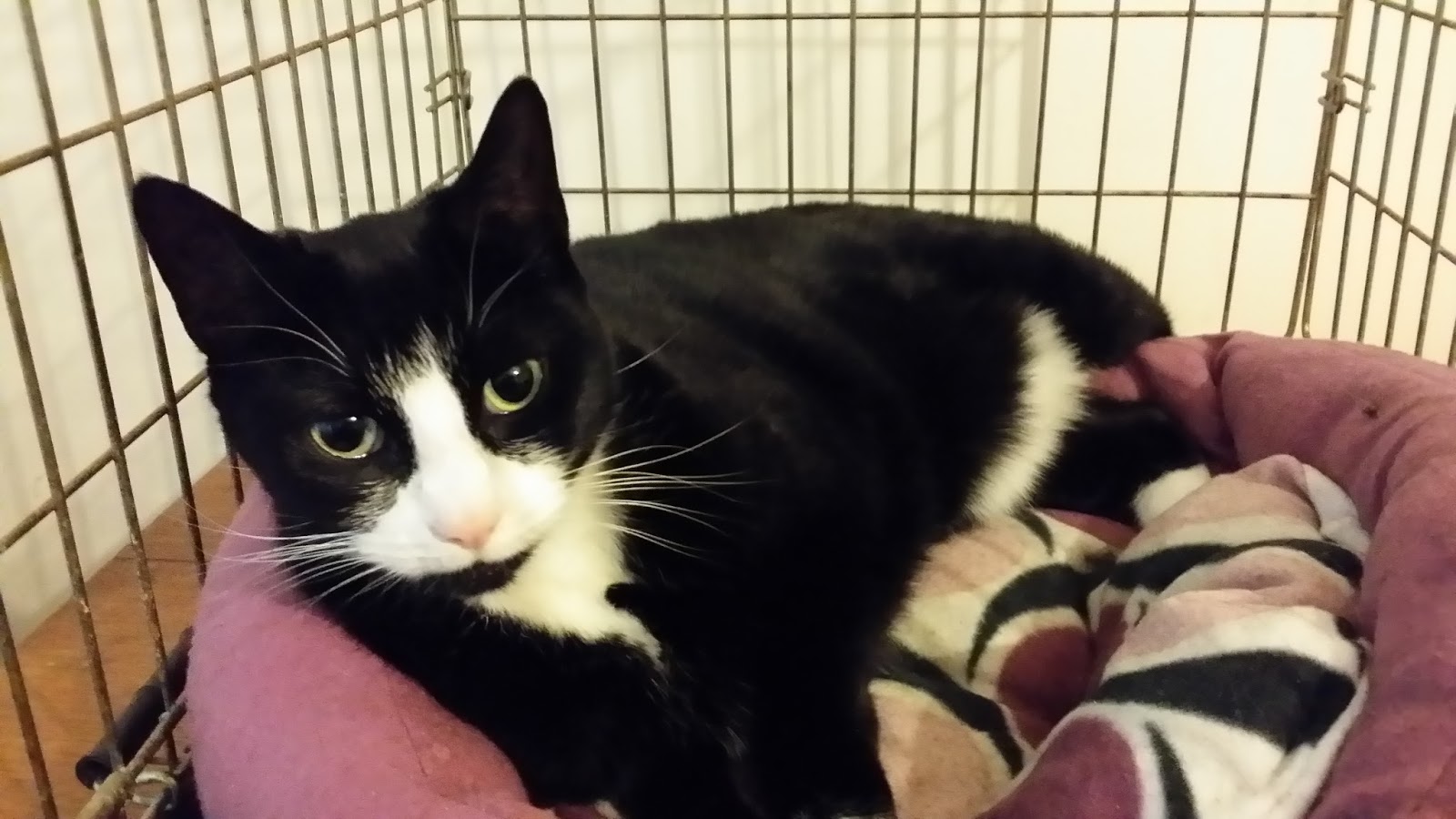 Not only will she not be in the running for a red hat, but she won't be running at all for a while. She went back to the vet on Friday evening for another examination, and the antibiotics had reduced the swelling enough for a proper examination. The vet thinks that she has a fracture on the top of the tibia. I have to bring her back to the vet on Monday for an anaesthetic and x-rays. In the interim, she got given another dose of painkillers... and in order to prevent her making things worse by increasing movement with the reduction in pain, I decided to keep her in a cage over the weekend.

This hasn't gone down well with either cat.

Miaowrini is unhappy that she can't wander around. Furretti is unhappy that I'm spending time alone with Miaowrini... She actually threw herself at the sitting-room door handle in an attempt to open it yesterday while I was feeding Miaowrini... fortunately, my insights into cat psychology meant that I had jammed the door shut from the inside...

Furretti retired in high dudgeon, and is now sulking in the bathroom.
Posted by Mulier Fortis on 19.1.14 2 comments: