Meeting Up With An Old Friend...

With all the churches in England & Wales closed to the laity during the COVID-19 lockdown, attending Mass isn't an option, but most (if not all) priests are still celebrating Mass privately.

Some priests have found it rather weird to offer Mass versus populum when there isn't a populum present. A few have overcome the difficulty by sticking photos of parishioners onto the pews, so that they can picture the people who should be present - of course, this risks Mass being seen as a rather exclusive club for friends of the priest. Other priests have opted to offer Mass ad orientem, which solves the problem of there not being a congregation.

Another group of priests has apparently bitten the bullet and used the time to offer the Traditional Latin Mass, or to learn how to do so.

I have no interest in looking at recordings of Masses, other than to skip to the sermon. Livestreamed Masses are a different matter: it is definitely not the same as being physically present, even if not receiving Holy Communion, but knowing that the Mass is actually being offered "at this precise moment at this particular altar" makes it a bit more special. The Latin Mass Society has been coordinating and maintaining a list of all the livestreamed TLMs being offered around the country, which has been an invaluable resource for anyone wishing to attend virtually. I'm not aware of any such coordinated list of nationwide Novus Ordo Masses, which makes the efforts of the LMS even more praiseworthy.

Because I was involved in the choir, I never got to attend Sunday TLMs at other parish churches, and rarely managed to get to weekday Masses during term time. I had a great time during the first week of lockdown popping in to different places while Mass was going on, just to see what the churches were like, if they had music, whether a sermon was given regularly and so on. After that I settled into a bit of a routine.

On Sundays I log in at my own parish - partly because I could sing along with the Gregorian Chant, partly because the Parish Priest, Fr. Christopher Basden, gives excellent sermons, and partly through loyalty to the Parish. Also, the Mass is at midday, so I'm definitely awake. The rest of the week is a little more flexible, depending on what time I wake up, but I usually attend the ICKSP Mass at the Dome of Home, New Brighton.

I have never been to the church in real life, so don't know the layout. The Holy Week services I saw all seemed to be at the same altar, but after the Octave Masses moved to a different altar. And now I see that they must have the High Altar and at least two side chapels. The Feast of St. Monica was celebrated in what I assumed to be the Lady chapel. I spotted a statue on a slender plinth which looked vaguely familiar, but I couldn't get the picture to a high enough resolution to work out which saint it was, only that it was a woman. I thought it reminded me of one of my favourite saints.

Last Saturday, after the Leonine Prayers, the priest and server moved towards the statue, and I realised that my initial hunch had been right: it was a statue of St. Philomena. On Saturday mornings the parish appears to have a set of devotions to her: a hymn, novena prayer and a litany in her honour. And then I discovered that the parish was properly called Ss. Peter & Paul and St. Philomena.

I felt a real jolt of recognition - rather like meeting an old friend... She's a particular favourite of mine because of her habit of producing miracles to confound modernist sceptics, leading to her being called the Wonder Worker. If you want to know more about St. Philomena, you can read more over at Zephyrinus' blog.
Posted by Mulier Fortis on 11.5.20 3 comments:

A Signal Lack of Faith...

The Government originally said churches could remain open for private prayer. The intelligent response from the Bishops of England & Wales would have been something along the lines of "Thank you very much for recognising the centrality of Catholics' belief in Our Lord's Real Presence in the Blessed Sacrament, oh, and, by the way, most churches are big enough to allow for social distancing - bigger than your average local supermarket, corner shop or Off Licence anyway - so can we at least allow people to attend Mass (without any social contact, or receiving Communion) if one happens to be going on when they turn up for private prayer please?"

Instead of this, the Bishops representatives promptly pointed out that the churches had been left off the list of organisations, groups and club meetings which had been banned, and declared that we ought to close the churches. This effectively handed the keys of Catholic churches over to the Government, while indicating that the Church hierarchy didn't consider it necessary for the laity to have any access to the Blessed Sacrament - at the same time reassuring us that Masses would still be being offered by the parish clergy. Individuals and groups calling for women's ordination accuse the Church of clericalism. Reserving access to the churches and Sacraments to the clergy is what I would consider to be real clericalism.

Please do not misunderstand me - I am not blaming priests and deacons who are saying the Mass in private under obedience to their Ordinaries, and I do not wish for them to stop offering the Holy Sacrifice of the Mass simply because the Laity cannot be present. I am blaming the Bishops for putting their clergy in such a position.

The Bishops having declared that being physically present in a church is not essential to the practice of the Catholic faith, it is hardly surprising that the Government is going to be reluctant to open them up again in a hurry - they were probably astounded by the ease with which access to churches for private prayer had been relinquished. It took Elizabeth I and James I considerably more effort to stop English and Welsh Catholics praying before the Blessed Sacrament - and in some parts they never fully succeeded. 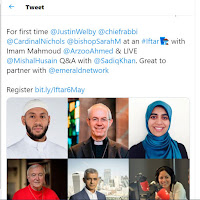 And then, to cap it all, there was a tweet from the Naz Legacy Foundation promoting #RamadanAtHome. I'm very happy that people of other faiths are able to celebrate their own religious festivals - however, seeing Cardinal Nichols listed as one of the supporters planning to "attend" this online event was totally incomprehensible. I didn't notice any tweets supporting #PalmSundayAtHome #HolyWeekAtHome #GoodFridayAtHome or even #EasterSundayAtHome coming from any other faith leaders, and nor would I expect to. What is so special about Ramadan that Cardinal Nichols felt it necessary to join in with a virtual Iftar celebration? It may not have been intended as such, but it appears to indicate that the Cardinal considers other faiths to be just as valid as the Catholic faith.

Taken as a whole, this signals a real crisis in faith among members of the hierarchy.