And Here It Begins... 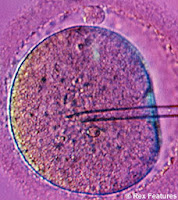 The Human Fertilisation & Embryology Authority have begun to consider research proposals for work on human-animal hybrid embryos. Chris Hack alerted the Post-Faith Conference Pro-Life Support Group on Facebook to the fact that the HFEA are putting up the details of the research applications in layman's terms, and they are asking for comments, either by post or email.

I am not sure if adverse comments will succeed in stopping any of the proposed research getting its licence, but we cannot stay quiet in the face of such ghastly experiments.

To say that there is less than 1% of animal DNA present in the hybrid rather begs the question: why allow experimentation on human embryos? Added to which, the human genome is only 2% different from that of the chimpanzee.

At the moment there are only two applications. The first proposal, from the University of Nottingham, involves transfering human DNA into rabbit eggs. That research is based on work carried out already in China. The idea is that by cloning these cells to get stem cell lines, the ethical concerns associated with the creation of embryos in order to obtain stem cells will be eliminated. The scientists totally fail to grasp the idea that creation of human-animal hybrids is morally repugnant to begin with!

The second proposal is from King's College, London. This time the scientists want to combine DNA from humans with genetic neurodegenerative disorders (such as Parkinson's and Alzheimer's Diseases) with the eggs from cattle and sheep, in order to produce "faulty" stem cells which can be studied in more detail.

The next step for the second proposal, logically, would be to inject these faulty stem cells into whole animals, because petri dishes cannot demonstrate memory loss or muscle wasting. This is not scare-mongering: I was at the Institute of Psychiatry when they were pioneering work on foetal tissue transplantation. I've taken part in this work. It will not stop here.

(Oh, and before you try the "if you had a seriously ill relative you'd take a different view..." line of attack, I would just like to point out that one of my grandmothers had Parkinson's disease, and one of my Grandfathers has Alzheimer's. And I still don't think it's morally acceptable to experiment on human embryos.)

And don't say that the embryos will not be allowed to go beyond 14 days. Scientists always push the envelope...

This is only the start.

You can email the HFEA at: regulationofresearch@hfea.gov.uk

or write to them by snail mail at:
The Regulation Department (Research),
Human Fertilisation and Embryology Authority,
21 Bloomsbury Street,
London WC1B 3HF

There is an excellent document by the Linacre Centre which summarises why such research is morally repugnant. If you need help on how to phrase your letter to the HFEA, you could use a few points from this summary, but please don't just cut-and-paste.

The closing date is 1st November 2007.
All holy angels and saints of God, pray for the unborn, pray for us.

Blogging From The Kitchen Stove... 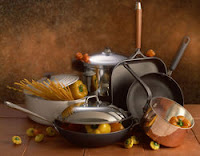 I've noticed through a shameless plug in my combox that Faccio La Mamma has started her very own blog, Antagonistic Pots and Pans. I am happy to make the plug more prominent because she gave some very good advice on remaining in a drug-induced haze for the duration of my cold...

La Mamma is from the UK, and was in accountancy (doing something or other... she was keen to correct me and say that she was not an accountant.) She is now the mother of twins. It will be interesting to see how her blog develops (how has she got time with two new twins to cope with????) - pop over and say hallo!

Lots of people suggested various remedies: people on the blogosphere have come to know me well - most of the suggestions involved alcohol. I think my favourite had to be the one from Londiniensis:

"Try a good measure of whisky in hot water with a teaspoon of honey and a dash of lemon juice, plus a soupçon of ground nutmeg and/or cinnamon. Works every time. Alternatively, ignore the water, honey, lemon juice, nutmeg and cinnamon."
Posted by Mulier Fortis on 19.9.07 2 comments:

Just In Case You Missed Them...

I'm feeling really dreadful. Not bad enough to be off school (setting cover work is such a hassle!) but bad enough for the technicians to tell me they've seen better-looking corpses (I refrain from telling them that so have I: St. Bernadette knocks spots off me even when I'm feeling great!)

So you're not going to get much in the way of blogging from me today. I am encouraged by the number of bloggers who, solicitous for my wellbeing, have encouraged me to take to both drink and drugs. Believe me, I am following this advice faithfully...

In the meantime, there is this very amusing piece from the Curt Jester about a new GPS system: Grace Positioning System, that is... designed to prevent backsliding and to keep you in the narrow way, I think I really could do with one of these gizmos.

Sister Roseann has hit the mainstream news media: she is interviewed by the Financial Times no less. The author, Rob Blackhurst, also visited the Friars of the Renewal, and reported on the general state of monastic and conventual life. And there was I thinking that the FT just covered money matters. Well, whaddya know...

I have fallen foul of that beastly bug which so torments teachers... yes, I have contracted the dreaded lurgy! Symptoms include a red, runny nose (which feels ten times its normal size and is tender to boot), streaming eyes, an aching head, a running temperature (but feeling cold at intervals), a gravelly sensation in the throat, and, most disastrous of all, a loss of power in the vocal cords...

It is a well-documented fact that children are highly effective little incubators for just about any micro-organism you care to mention. I remember being warned at King's College (where I was doing my teacher training) that it takes approximately two years to set up immunity to a new school population... 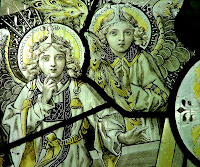 This weekend (24th Sunday in Ordinary Time) is the anniversary of my return to the fold. It has been fifteen years (and feels like yesterday!) As Fr. Z remarked, "I guess you're pretty much settled back now?" and I was able to confirm, with something approaching glee, that the Church hadn't managed to get rid of me yet...

I do not know why I was privileged to experience my conversion: it was a bolt from the blue which completely overwhelmed me. Many souls remain out in the wilderness, seeking happiness in their lives, not realising that, made to be with God for all eternity, we are not truly happy until we lose ourselves... and find Him.

I am thankful that I had the chance to make like the prodigal, and find my way back home.
Deo gratias.

(And yes, it was Year C when I returned... with the Gospel about angels rejoicing over each and every repentant sinner. I guess they had quite a party fifteen years ago...)
Posted by Mulier Fortis on 16.9.07 5 comments: