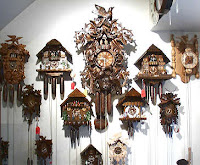 ...British Summer Time (Hah!  That's an oxymoron!!) comes to an end.
The clocks all go back an hour from 2am BST.
The advantage is that I get to have an extra hour's sleep, so I'm not complaining.  I only kvetch about BST in the Summer when I lose an hour, and then spend the entire night unable to sleep at all because I'm wondering whether I've actually reset the alarm clocks properly...
Posted by Mulier Fortis on 25.10.08 1 comment:

As I mentioned before, my blogroll is in need of a serious overhaul.  There are several blogs which have been deleted, lots of blogs which haven't posted anything in the last six weeks without an indication that this is a temporary hiatus (hey, we're all entitled to take a holiday, even from blogging) and more new blogs that I want to add.
Unfortunately, Blogrolling still appears to be hors de combat.
So, this afternoon I settled down to a prolonged session with my blog, my blogrolls (I have three separate ones for ease of searching) and Google Reader.  Clicking on each link, checking the blogs and adding them to my Google Reader feeds is a time-consuming business: I've managed to finish the clerical blogs and the UK blogs... the blogs from the rest of the world will have to wait until I've had a cup of coffee... and then I have to figure out how to get them all listed in my sidebar...
I've also noticed another problem.  Anna Arco's Diary won't register in Google Reader... which is a real pain (she's an outstanding writer.)  The site doesn't appear to have a feed.  Any suggestions as to how this problem can be overcome?
Posted by Mulier Fortis on 25.10.08 3 comments:

I have been quite tired this week: the last week of the Autumn half term is always hard going, and this time it was eight weeks long.  Yes, I know that most people don't get quite as many holidays, and eight weeks between holidays sounds like absolute luxury to many, but, to be fair, most people can, if having a bad day, crawl into the stationery cupboard or do some filing.  Teachers are "on show" all day, and there is nowhere to hide.  It's not even possible to get the kids to sit down and do questions from the book - this sort of thing is frowned upon as "bad practice" these days...
Anyway, that's why I've not done much in the way of blogging...
...I have, however, been listening to the radio.  Not having a rant on the blog about this week's news has probably done permanent damage to my cardiovascular system: I can feel my blood pressure rise just recalling a few of the topics.
First up is the apparent anointing of Barack Obama as US President-elect. Now, I'm not really into politics, still less am I interested in American politics, but I do resent the BBC and others trumpeting his victory before the votes have actually been cast.
Then there is the "wonderful" news about Britain's pre-eminence in the scientific sphere.  We are the first country in the world to allow human-animal hybrids, so-called "saviour" siblings and embryo experimentation. Forgive me for not breaking open a bottle of bubbly... but I don't actually consider this anything to be proud of.  The one thing to be grateful for is the fact that there wasn't time to debate all the pro-abortion amendments (there was absolutely no chance of any restrictions being imposed anyway, given the currently overwhelming pro-abortion make-up of the House of Commons.)
And then there is the introduction of compulsory sex education classes for five year-olds.  They won't be taught "sex" but they will be told about the body parts and about relationships.  Of course, given the Government's agenda, this will mean that the children will leave primary school knowing what a homosexual lifestyle is, even if they are unable to spell it.
And the really, really horrifying thing? The fact that the Catholic Education Service is sanctioning this in Catholic schools. We are told that nothing inappropriate or contrary to Catholic teaching will be promoted in Catholic schools.  I am so reassured by this statement...
After all, nothing contrary to Catholic teaching is promoted in our Catholic secondary schools, is it?  Well, nothing other than how to put on a condom, where to get the morning after pill and how to arrange an abortion...
Posted by Mulier Fortis on 24.10.08 3 comments:

The Catholic Family and Human Rights Institute have the following petition up and running:
We, the citizens of UN member states, in this year of the 60th anniversary of the Universal Declaration of Human Rights, adopted and proclaimed by the UN General Assembly resolution 217 A (III) of 10 December 1948,
Recalling that:

The Universal Declaration is a common standard of achievement for all peoples and all Nations,

Bearing in mind that:

Human rights, dignity, freedom, equality, solidarity and justice constitute the spiritual and moral patrimony on which the union of Nations is based,

Proper consideration must be given to

1. The right to life of every human being, from conception to natural death, each child having the right to be conceived, born and educated within the family, based on marriage between a woman and a man, the family being the natural and fundamental group unit of society,

2. The right of every child to be educated by his or her parents, who have a prior and fundamental right to choose the kind of education that shall be given to their children.

Therefore, we call upon:

All governments to interpret the Universal Declaration of Human Rights properly such that:

Everyone has the right to life, liberty and security of person (Article 3)

Men and women of full age, without any limitation due to race, nationality or religion, have the right to marry and to found a family (Article 16).

The family is the natural and fundamental group unit of society and is entitled to protection by society and the State (Article 16).

Motherhood and childhood are entitled to special care and assistance (Article 25).

Parents have a prior right to choose the kind of education that shall be given to their children (Article 26).
A bit long-winded, but it seems pretty straightforward.  You can sign the petition by following the link HERE.
Posted by Mulier Fortis on 22.10.08 1 comment:

I love my job.  I especially love my job when, at an otherwise unproductive after-school staff meeting, another teacher tells me that one of her tutor group had expressed how much he was enjoying my Science lessons... and Year 8 don't do sarcasm, so it must have been a genuine compliment...
Even though I love my job, I'm still counting down the minutes until the half term holiday... (2770 at the moment...)
Posted by Mulier Fortis on 22.10.08 1 comment:

Oooooohhhh.  I am desperate to update my blogrolls.  Lots of new sites to add, and, sadly, some dead links to remove...
Unfortunately, Blogrolling seems to be suffering some sort of conniption.  I have the blogroll on the blog, but cannot update it... and no indication of when it will be back up and running...  I am loathe to go back and put all my links into Blogger by hand, but if things haven't been sorted by half term, I might have to do just that!
Aaaaaaaarggghhhhhh!!
In the meantime, check out this blog from Vancouver: Fr. Anthony Ho, originally from Hong Kong, is the assistant priest at St. Patrick's, Vancouver.  I discovered his blog when he contacted me on Facebook.  Fr. Anthony has some interesting catechetical material on his blog, as well as recordings of his talks and sermons.  Pop on over and say hallo...
Posted by Mulier Fortis on 20.10.08 4 comments:

In the 2008 Blogger awards, I made the top ten for Best Religion Blog.  I would be a lot happier about that if South Ashford Priest hadn't trumped me by four votes with a blog which is no longer extant...!
So, to assuage my feelings of inadequacy, I took this little test, courtesy of The Cellarer...

I agree with James Preece that we've pretty much covered the Live Simply campaign... and anyway, if the Bishops of England & Wales are going to put out such crassly patronising material for their "Yoof" activities (stuff that no self-respecting teenager would touch with a ten-foot barge pole) then I think it's time to get them to take a reality check...
...the government are already doing a great PR/brainwashing job on sustainable development (it's in the (compulsory) GCSE Science curriculum), recycling (it's in the (compulsory) GCSE Science curriculum) pollution (it's in the (compulsory) GCSE Science curriculum) and energy-saving suggestions (I'll give you three guesses, but you'll probably only need one of them...) They also get a lot of this stuff from TV programmes, the internet, and magazines... school PSHE classes also cover quite a bit of this stuff too...
What the young people of today need to hear when they go to church is not more of the same. They need encouragement to live the Christian way of life in every way, and that includes morality.  So the Bishops ought to concentrate on promoting the message of Humanae vitae, which, after 40 years, is being shown to be uncommonly prophetic.
Go over to the site, and register for the Live Chastely promise.  BTW, at the risk of stating the blindingly obvious, (as a teacher, I'm always conscious of the fact that "the obvious" is often not that obvious to everyone) living chastely is not the same as being celibate.  If you're married, then living chastely means not going to bed with anyone other than your spouse.
Posted by Mulier Fortis on 19.10.08 No comments:

More On "The Management"

You Tube has come up trumps... the comedy duo I was thinking of was Hale & Pace.  I can't find an actual "The Management" sketch, but on the basis of this, they did a couple of commercials: first, the Fireworks Code...
and then this one for Clorets...
Posted by Mulier Fortis on 19.10.08 No comments: