I love my Saturday morning routine. A chance to lie in later than on a school day (that may have to change, as it mucks up my sleep cycle), then Mass in the Extraordinary Form, Exposition, Adoration of the Blessed Sacrament, the opportunity for confession, Benediction and then home or shopping or visiting friends. The only disadvantage is that the morning's news has pretty much become "old" news by the time I get to hear it.

So, Tony Blair has become a Catholic. I would be the last person to say that a true conversion of heart is impossible - I experienced one myself, and as a former acquaintance proclaimed, "You??? You're the last person I'd have thought of as being Catholic!! God really can work wonders...!" However, as I've noted before, and as numerous others have too, Mr. Blair's voting record and public statements on issues such as abortion, embryonic research, homosexual "marriage" and so on have been contrary to Church teaching, and have been public. As a result, his conversion needs to be accompanied by the equally public refutation of this former way of life: a statement that he accepts that his previous actions were wrong according to Church teaching, and that he recognises this and would not do the same thing again...

If we get one, then I am prepared to eat Fr. Tim's biretta (I don't have a hat, and I need my mantilla for church!)

I'm in good company: Damian Thompson has his doubts, and so do the good people at SPUC, according to Fr. John... and Fr. Ray has a few thoughts too

I do not like vegetables. I very rarely eat them: the exceptions are potatoes, especially chipped and deep-fried. I heard a report this evening that, due to some unseasonably wet weather (or was it dry weather? I seem to recall a drought warning at some point...) there is likely to be a sprout shortage. This will cause Fr. Tim some unhappy moments, no doubt, as he seems to like the vile vegetable, but I think I shall be able to restrain my own disappointment...

Broccoli is right there with the sprouts, in my opinion. However, it would appear that there is an alternative festive use to which the vegetable can be put, according to Fr. Justin...

I don't like carrots either. Unless they're grated and smothered in cake...
Posted by Mulier Fortis on 22.12.07 4 comments:

"New" Blog On The Block 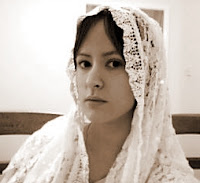 Katie has just introduced herself via the combox on my post celebrating the five years since I first took my vows. She is in the process of discerning a vocation as a Consecrated Virgin. Her profile picture shows that she too wears a mantilla... though as she's younger and prettier, she doesn't feel the need to have the photo taken from behind!

Her blog is called Searching and Seeking. Pop on over and say hallo!
Posted by Mulier Fortis on 21.12.07 1 comment: 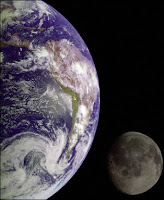 This is a short post, more of a passing thought, really, as I have arrived back from Benediction a little late. Well, I did stop off for a few coca colas in the Parish club afterwards...

'Tis the season when schoolchildren around the country (those still in school, that is!) are being subjected to DVDs and videos by frazzled teachers. I dislike the fact that the kids clamour for videos pretty much from the start of December, and try to limit them to the last day and a half. In reality, they prefer this too, because otherwise they get bored. Only so many DVDs you can watch in a day!

Anyway, Year 10 had their last Chemistry lesson before the holiday, and there was a science programme which one of the department had videoed... and it went on about how the Earth was perfectly set up to allow complex life to develop. There was this presenter enthusing about how, contrary to the popular belief that there might be other similar planets capable of supporting life, there might, in fact, only be one such planet in the whole universe... ours!

It had a collision with its sister planet, which made it big enough to prevent the atmosphere leaking away into outer space, and which created the Moon... which is necessary for causing seasonal variations. Jupiter is a big enough planet close by to protect the Earth from most meteorite collisions. Conditions on Earth were stable enough to allow complex life to develop, but not too stable so as to prevent adaptation and evolutionary kick-starts at various points...

Why do some people find it so difficult to accept that maybe, just maybe, the Judaeo-Christian tradition of the Earth being created specifically for Mankind could have something going for it...?
Posted by Mulier Fortis on 20.12.07 No comments:

That Oceanic Gem reminded me that Ma Beck had tagged me for a meme a while back, but I hadn't answered it. The reason it had slipped my mind was that I had completed it some time ago (in fact, I think it was the first one I ever did) ... but just for Karen, I'll put the link to the Book Meme HERE, and then I can declare that she's tagged...
Posted by Mulier Fortis on 19.12.07 1 comment:

As a bolshy teenager, I viewed much of Church history as pious claptrap. Records of the early Church couldn't possibly have survived... and what was left was doctored anyway. I would have been right in there with Dan Brown.

Now I know better. The documents of the Church have been lovingly preserved by monks in monasteries, and the Tradition has been passed down through the centuries. And we have records of the early Martyrs, preserved in the Canon of the Mass... and records of every single one of the Popes, from Peter onwards...

This beautiful summary brings it all home. Ma Beck threatens to set a test, but I think she's bluffing. Watch the video anyway!

Photo and video editing at www.OneTrueMedia.com
Posted by Mulier Fortis on 18.12.07 6 comments:

There have been some really nasty bugs at school. I had been rejoicing that, despite starting at a new school (which tends to mean that you catch everything going while your immune system readjusts) I had gotten off pretty lightly, with only the occasional bout of the lurgy...

... alas, I rejoiced too soon. Monday morning started off with a croaking voice and a scratchy throat... I managed to get to the early-morning Mass, convinced that things would improve once I was up and about. They didn't. I was sent home from school later in the day so as not to spread any germs along with the seasonal good cheer. Two days in bed with a temperature, decidedly wobbly knees, and a bunged-up-yet-runny nose, headache and sneezes have left me feeling very sorry for myself.

On the plus-side, the scratchy throat seems to have gone...

I came across this video while meandering around the web. This chap decided to celebrate the purchase of a new camera by taking a photo of himself each day... for eight years!

That got me thinking... how much have I changed in the past eight years? Not my looks, but in my spiritual life. John Henry Newman wrote something about change... but unfortunately googling it just brings up the last part of the quote, about how to be perfect is to have changed often... and I just know that there's more to it than that.

Not Done Your Homework, Damian?

Oh dear, someone's skimped on his research! That's 100 lines for you, my boy... "I must check the blogs more carefully before making rash statements..."

Mr Thompson has been having an unkind chortle at the expense of the seminaries in England and Wales... he points out that they are over-staffed, and probably having kittens at the thought of Pope Benedict's latest pronouncement that all seminaries have to teach students how to celebrate the Extraordinary Form...

Yes, the student-staff ratio quoted does seem a little ridiculous. But I doubt that they are all full-time staff. At least one of the four seminaries employs parish priests as lecturers: Fr. Tim Finigan, Fr. John Boyle and Fr. Dominic Rolls being three I can name off the top of my head...

...the first two of whom actually celebrate the Extraordinary Form in their own parishes... I doubt that they are opposed to passing on this knowledge to anyone else.

All She Wants For Christmas...

Heheheheheh... Leutgeb has been checking out her blog stats. I go through phases of it, usually near a blogging "milestone" - it is fascinating to see what brings people to visit a blog.

I have to confess to an unkind chortle or two when I notice a spate of visitors who have fetched up on Mulier Fortis after googling "Estelle White hymn lyrics" or "Colours of Day"... They definitely would have gotten more than they bargained for, but you never know, they might just get to see the error of their ways...!

Leutgeb seems to attract the baking crowd. Yup, naming your blog after a type of Welsh bread will tend to confuse a lot of folks...

Blast From The Past...

I used to love The Muppet Show. And one of my favourite sketches was "Mahna Mahna" - I would drag my hair down over my face and sing away happily to entertain my younger sister.

I heard one of the boys at school singing "Mahna Mahna" as he walked down the corridor, which made me wonder if it had been shown on TV lately, on one of those compilation "100 best..." or something. I decided to check out You Tube for a trip down memory lane, and sure enough...

I have to admit that the aging hippie being given pitying looks by the backing singers as he stubbonly tried to do his own thing did make me grin... Face it, hippies... it's over!
Posted by Mulier Fortis on 16.12.07 4 comments:

More On The Ugly Vestment Front...

I know, I know... I've been spoiled by all the lovely stuff we have at Our Lady of the Rosary, Blackfen. It helps that Fr. Tim has an eye for this sort of thing, and will happily relieve his fellow-priests of spare vestments, marble, and what-have-you if they are having a clear-out of all their trad stuff...

But poor Fr. Daren in Illinois has to wear this dish-rag for Gaudete Sunday...