Mantilla-twitch to A Thorn in the Pew.
Posted by Mulier Fortis on 20.7.07 No comments:

Can you imagine the reaction if this really did happen? I get twitchy just being unable to access blogs while at work... 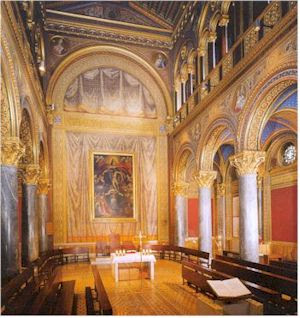 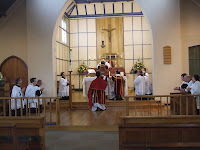 I am not the happiest of bunnies... I tried to buy a book online earlier (a new Chemistry book, as I think I need to do some extra reading over the Summer) and got a message back from Amazon telling me that the transaction had been declined. I wasn't too happy, but Amazon had had a few glitches during the day, and I didn't think anything more of it.

I then went to a cash machine on my way home. After one (correct) PIN number entry, the machine spat the card back out at me, saying that too many incorrect PIN numbers had been tried, and that the card was declined. Alarm bells started going off in my head...

I rang the bank. The operator asked if I wanted a new PIN to unblock the card. No, I explained, I wanted to know why the card had been blocked in the first place. I was told that I had entered the incorrect PIN number too many times. I told the operator that I jolly well had not put in the wrong number, not even once. She then told me that the card must have been blocked by a faulty machine, and that a new PIN number would be all I needed to get the card working again.

I was starting to get a little frustrated by this point. I felt that she wasn't actually listening to what I was saying, but was reading from a prepared script. I pointed out that I hadn't used a machine until this evening, after the card had been blocked (illustrated by my declined Amazon purchase.) After first trying to fob me off with the claim that she couldn't tell why the card had been blocked, she then changed her tune and said that someone in Scarborough had tried to pay for items using the card, but the PIN had been incorrect, and the card had then been blocked. So, now did I want a new PIN number to be issued?

With difficulty, I explained that I was very concerned about the integrity of the card - if I asked for a new PIN, surely the person with the cloned card had a possibility of getting the correct PIN number, by pure chance. There was also the problem of the internet... no-one asks for a PIN number online, just the card number. And what if they tried to sign for stuff using my card...?

No, no... I was being unreasonable. My card had to be used with the correct PIN. They would give me a new PIN. I pointed out (again) that the PIN wasn't needed for online purchases. I was reassured that the card had been blocked, and wouldn't work until I got the new PIN. I pointed out (again, with less patience) that PIN numbers were not used online, and one I activated my new PIN, the toe-rag with the cloned card could start shopping again...

Eventually, the operator handed me over to her supervisor. She checked the online purchases, and nothing untoward had gone out in the past couple of weeks. And to prevent the card being mis-used when I get my new PIN, I'm going to get a new card as well, just to be on the safe side...

However, I shall also make a little trip to my nearest branch and make my displeasure known!

Another video celebrating the liberalisation (never thought I'd be pleased to hear that word!!) of the extraordinary form of the Mass. Not quite as funny as Fr. Tim's original, but Fr. Stephen Fisher has produced an amusing and entertaining follow-up! I particularly like the circus music...


Mantilla-twitch to Mark for spotting this one!
Posted by Mulier Fortis on 18.7.07 7 comments:

Ma Beck has alerted us to the fact that Lumen Gentleman is collecting a database of people who are interested in attending/saying Mass in the extraordinary form. I suspect that it is designed to confound one or two sceptical souls who insist that there is no call for it in their neck of the woods. There are several different countries represented, so pop on over and leave your name. The more the merrier... (There does seem to be a slight hiccough with the "State" for addresses in the UK, but hopefully they'll get ironed out soon.)
Posted by Mulier Fortis on 17.7.07 6 comments: