This afternoon I was having a quiet read (what else are holidays for?) when the catflap clattered. I didn't look up - it's a noisy flap and the cats are in and out several times a day. I then heard Monsignor Miaowrini practising her pounce-and-roll technique in the front room. I still didn't look up - she had been rolling around there all morning... 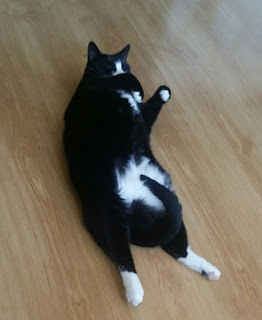 Then I heard the peculiar kitty-scrabble-sound a cat makes when it is holding on to something with its front paws and kicking ecstatically at it with the back ones. This made me look up...

There, in the hall, was an impressive collection of feathers... 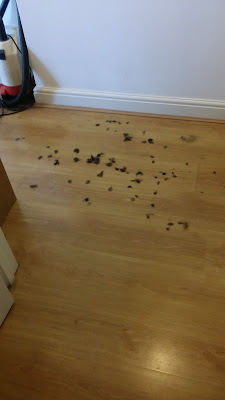 I followed the trail to the front room to find Miaowrini clutching a small bird, rolling over and over with it in her paws... a sort of kitty-crocodile-death-roll. I retrieved the still-warm bird, which had died of fright, I think, as there were no obvious injuries, and cleared away the feathers. 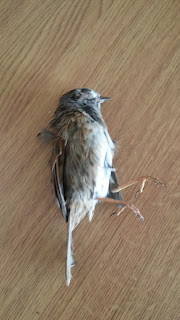 Naturally, my first instinct was to update the Kitty Kill Count. After all, hunting trophies have been scarce since we moved to Margate. I blame the seagulls...
Posted by Mulier Fortis on 30.3.16 3 comments: 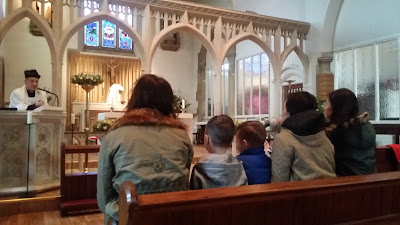 The Triduum is rather a busy time. This year, because Easter was so early, most schools opted to work right up until the last possible minute, so Holy Week was taken up with teaching commitments until the afternoon of Maundy Thursday. This meant that my Triduum preparations were rather truncated...

I did attempt to get to Tenebrae at the Shrine of St. Augustine, Ramsgate for Spy Wednesday. However, a full teaching day followed by a revision session for Year 11, followed by an hour and a half of booklet photocopying and collating for Maundy Thursday's Mass, and two and a half hours' choir practice in preparation for Good Friday and the Easter Vigil meant that I was a little tired. By 10pm, with only the first nocturn of Tenebrae completed, I realised that I hadn't eaten all day and I had a full day of teaching still to follow, so I went home early. Nevertheless, the bit of the liturgy I attended was very beautiful, and the Victoria Consort sang superbly, so I was glad I had made the effort. 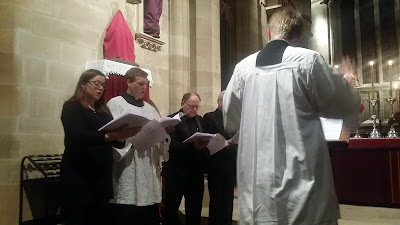 After work on Maundy Thursday I finished preparing the booklets for the Mass by stapling them - fortunately we will be able to use them again as the TLM operates on a one-year cycle. A run-through of the music followed, but we had less time than anticipated as I had miscalculated the start-time by half an hour. A mad scramble for the choir loft ensued - but we managed to sort out the music in time. Singing the Pange Lingua for the procession to the altar of repose always brings a lump to my throat. We chanted Vespers after Mass and then had the Solemn Stripping of the Altars... 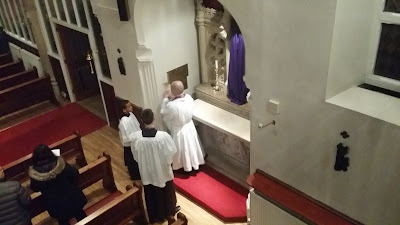 Good Friday started with Stations of the Cross - but since this was at midday, I managed to catch up on some sleep first. Children read a short description of each Station, and some of them walked round with Fr. Finigan... 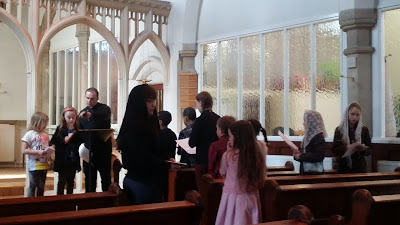 The Afternoon Liturgical Action of the Passion was very moving. Scooting down from the choir loft for Veneration of the Cross was a bit of a struggle - my joints were playing up due to the damp - but I wouldn't have missed it for the world! 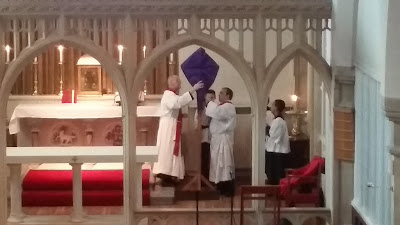 We had "Święconka" - the traditional Easter Blessing of food - at midday on Holy Saturday... it was great to see the children with their decorated baskets... 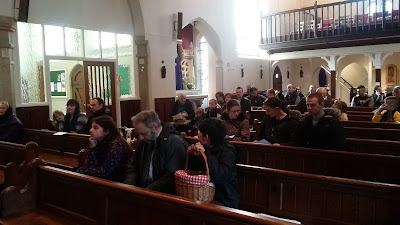 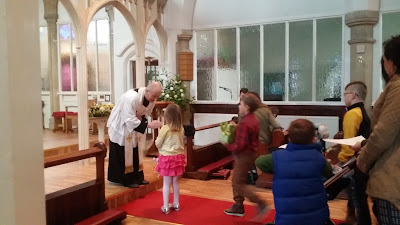 And then there was a gap until the Easter Vigil itself. We had winds gusting at about 50 mph, and it was raining, so the lighting of the Easter fire and Paschal candle happened in the hall. Deacon Ambrose sang the Exsultet superbly... 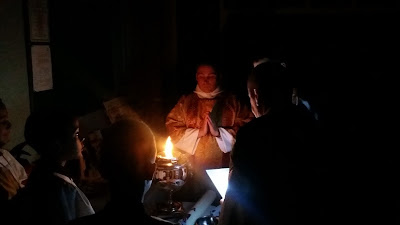 Of course, it had to be this weekend that the clocks changed, so I lost an hour's sleep. Fortunately I sing at the 11:30am Mass, not the 9:30am... but I still overslept!! 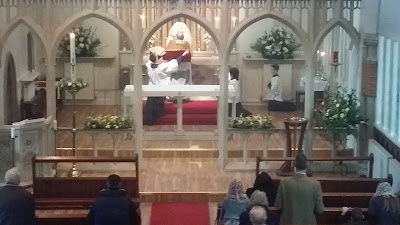 All my photos are in albums up on Flickr if you want to have a look...

The advantage to finishing the term on Maundy Thursday is that I now get two whole weeks after the frenzy of the Triduum to rest and recuperate. Watch this space for lots of holiday pictures of the beach...
Posted by Mulier Fortis on 28.3.16 1 comment: