A Foretaste Of The Heavenly Banquet...

This morning saw Blackfen's monthly Missa Cantata with the visiting schola. I haven't ever been at an Ember Day Mass before (at least, not consciously) but I had been warned that it was a long service due to the five readings, four graduals and a canticle (along with about seven collects) which preceeded the Epistle.
I was amazed at how quickly the time seemed to pass: the liturgy was beautiful, and there was, for me, a real sense of the numinous. As Fr. Tim said in his sermon, this is what heaven is all about: the worship of God for all eternity.
I took a few photos: of the Mass itself, and of Benediction which followed. Enjoy! 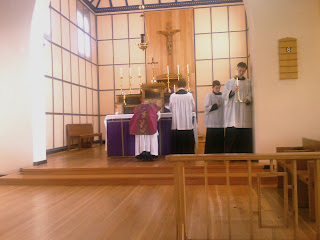 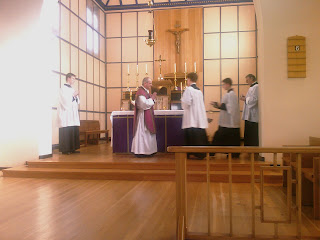 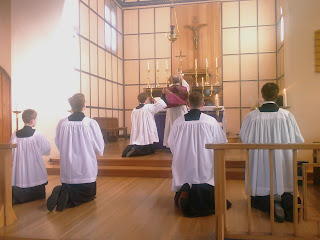 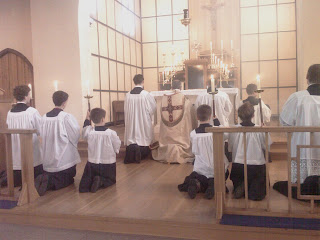 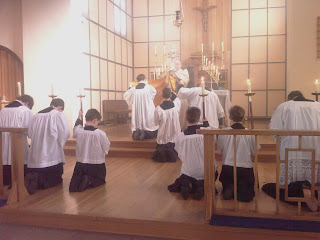 We had so many servers for Benediction that they barely fitted in the photo... I shall have to consider moving back a couple of pews!
Posted by Mulier Fortis on 7.3.09 1 comment: 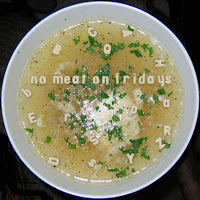 When I first came back to the fold, I had picked up the idea that not eating meat on Fridays was something that Catholics used to do, but Vatican II had done away with all that, because it really wasn't very practical... and anyway, quite a lot of the world's population never ate meat at all due to poverty, and so not eating meat on Fridays was a bit pointless...
Of course, no-one ever pointed out that some other form of penance was supposed to be substituted... I discovered that snippet of information some time later. The problem was that deciding on a suitable Friday penance was soooo hard, as I usually didn't remember until the end of the day, by which time the opportunity for all suitable penances had pretty much expired... "Well, I haven't eaten any chocolate, so I'll make that my penance..." doesn't really cut the mustard.
It was actually through reading blogs that I discovered that abstaining from meat was still considered to be a requirement for Catholics in some parts of the world. Then I discovered that some people still observed the penance anyway, without any "requirement" and I thought I should try it.
It certainly reminds me that it's Friday: I loathe vegetables from the very depths of my being (potatoes don't count as vegetables, especially when chipped and deep-fried), and I'm not much of a fish-eater (unless you count fish fingers) so not eating meat is definitely something I notice.
Some people will still object that, if you do like fish, then substituting a nice salmon steak (or whatever) for your usual pork chop isn't much of a penance... this, however, is more a demonstration of how they view penance than anything else: it's not necessarily something unpleasant, or even terribly difficult. Instead, it's about doing something for the love of God, making an effort for His sake.
Fr. Longenecker has some further thoughts about not eating meat on Fridays...
Posted by Mulier Fortis on 7.3.09 8 comments:

Fr. Zuhlsdorf has been so incensed by the attack on His Hermeneuticalness by The Suppository that he has set up a campaign to encourage everyone to pound Fr. Tim without fear of ecclesial penalties...
So, if you want to send Fr. Tim a donation of £1, you can do it by clicking on the "Pound Fr. Finigan" button, and Fr. Z will send the proceeds on... so that we can buy some snazzy silver candlesticks for the Lady Altar.
While you're at it, you can donate some money to Fr. Z as well...
Posted by Mulier Fortis on 7.3.09 No comments:

...methinks Vincenzo has altogether too much time on his hands, but the result is definitely worth it! 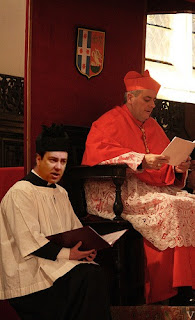 Matthew over at Creative Minority Report has posted about the latest Barbie to hit the shops: Tattoo Barbie. No, Cavey, don't get excited, not a military tattoo, just the body-piercing type.
Matthew has a few suggestions for forthcoming Barbies... Correctional Facility Barbie being one of them! 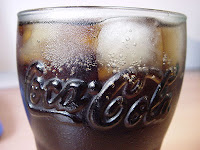 I was feeling really ill last week. I felt so ill, I actually made the effort to go to see my GP. He listened to my symptoms (feeling dizzy, major headache for two days, pins and needles in one hand) stuck a thermometer in my mouth and told me that I had a temperature of 38.3 °C. This, as one friend informed me, is very nearly 101 F.
I am now much better, though feeling a little washed-out. However, I've noticed a curious side-effect... coca cola, one of my favourite drinks (when I'm not drinking alcohol) suddenly smells petrol-ly. It doesn't taste too great either!
Ok, I know there are a couple of medicos who read this blog... whassup?
Posted by Mulier Fortis on 5.3.09 5 comments:

This Made Me Giggle... 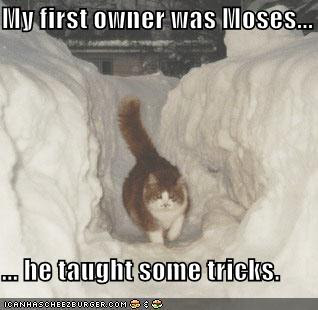 ...and it would have been handy on our recent snow day... instead of which I had to trek around the back of the flats to clear snow from the cat-flap ledge before Sylvester would deign to go outside...
Posted by Mulier Fortis on 3.3.09 2 comments:

Making God In Her Own Image...

Laurence England writes a really good blog. He also is fortunate enough to attend an excellent parish (Fr. Ray Blake, the PP, is a really wonderful priest!)
Laurence has been reading up (via The Telegraph) on Cherie Blair's latest project: speaking on Channel 4's History of Christianity programme tonight, she is apparently complaining that,

...Women were "virtually invisible" in the public face of Christianity and that its failure to recover from the social changes of the 1960s was one of its "fundamental weaknesses. "Until the traditional churches fully resolve their relationship with the female half of the population, how can they expect Christianity to have a future in the modern world?" she asked.

Laurence's reply to this is very tongue-in-cheek, and deliciously witty... he uses yellow for his own comments, but that would look frightful on my blog, so I'm just picking them out in bold.
(Oh good grief, woman, just put the kettle on will you? I don't know...Nag, nag, nag...)

"Traditionally it was women who passed religion on to their children and who kept the church going through good times and bad, but when it comes to the public face of Christianity, women are virtually invisible." ("Why can't I be a priestess?")

She was filmed interviewing Britain's most senior Catholic, Cardinal Cormac Murphy O'Connor, about the issue. "If you actually look at the formal structures of the Catholic Church you don't see a woman's face when you see people speaking for the Catholic Church... can we change that?" she asked. ("You and me, Cardinal, let's take on the Holy Father and march on Rome with an army of 10,000 women to be ordained! I know all the Apostles called by Christ were men, but Christ was, like, so 2,000 years ago. Get with the programme, man!")

Finally, when challenged about her use of contraception, Mrs. Blair replied,

"I'm a feminist…(rather than a Catholic?) How could I have done all the things I have done if I hadn't used contraception? Because actually every time I didn't use contraception I seemed to have a baby." (Publicly confessing your sins is one thing...but it sounds like you want to nail condoms to the church door in some German town and make Church teaching in your own image.)

I think that just about sums it up...
Read what Laurence has to say HERE.
Posted by Mulier Fortis on 1.3.09 9 comments: 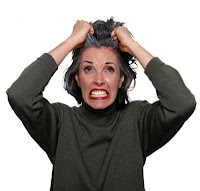 Grrrrrrr.
One of the (many) things which really gets up my nose is the mis-quoting of certain sayings and proverbs.
The particular bugbear I have in mind is "I want to have my cake and eat it."
Obviously, one must be in possession of the cake before one can consume it. Therefore, it seems to be rather important to have one's cake and eat it... which means that the saying is actually meaningless.
In fact, the expression is: "To want to eat one's cake, and have it too..." thereby suggesting that despite wanting to make use of something (so that it is ended or finished), one still wants to remain in possession of it, ready to make use of it at a convenient point in the future. 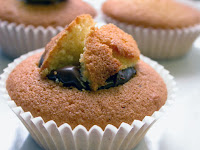 Rant-ette over. Thank you for listening...
Posted by Mulier Fortis on 1.3.09 3 comments:

A Nose By Any Other Name...

It seems that Red Nose Day is nearly upon us. I had hoped that I'd missed it (I don't watch TV) but that must have been Children In Need or some other fund-raising enterprise.
For those of you across the pond, who haven't been acquainted with Red Nose Day, it's part of Comic Relief, and people do silly things and wear red noses in order to raise money. You can't turn around without seeing (or hearing) that something ridiculous is being done "for charriddy" (though quite a few C-list celebs seem to try to resurrect their ailing careers by getting prime spots on TV...)
I have no problem with the idea of doing stuff to raise money for worthy causes. Unfortunately, I've become very choosy about which causes I will support. I won't support any charity which claims that it's offering reproductive "choices" to the poor in Africa (ie. "we think you're too stupid to be allowed to reproduce, so we're going to "encourage" you to have smaller families...") I don't want my money going to fund the killing of babies for research (so that's quite a lot of the medical charities scratched off the list), and I don't wish to support euthanasia (so that wipes off rather a lot of the charities which deal with disabled or elderly people.)
Red Nose Day and Comic Relief allocate funds to charities which do all those things. Avoid them.
It's a lot easier to pick a specific charity (or two or three), check them out via the SPUC Charities Page, and then give money with a clear conscience. SPUC, Aid to the Church in Need, Life, the Good Counsel Network, Cor Unum, and the Sisters of the Gospel of Life are examples of charities which support the teachings of the Catholic Church, and that's just a bunch I reeled off from the top of my head.
Think about where that money is going.
Posted by Mulier Fortis on 1.3.09 No comments:

I Forgot To Mention...

Ooops. Big booboo...
Back in November, I asked Angela Messenger to pick me a Patron Saint for 2009... just for once, I managed to get it done before the year started.
However, after being assigned my saint, I promptly forgot all about him. Not good. Not very polite. Especially since I will probably be calling on him for help with something or other before too long...
So, who did I get?
None other than St. John the Evangelist.
Wow. Thanks Angela! 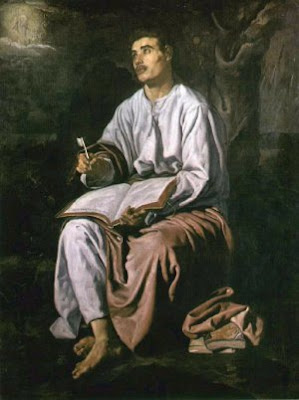