On the subject of babies, I have mentioned that my sister is expecting her first in early January. She had problems at the beginning of the pregnancy but they had seemed to have passed.

Yesterday she was told that there is a possibility that the baby will be a breech presentation, as it's in the wrong position at the moment. There is still another week in which my nephew/niece could move round, but obviously my sister is a little worried. Any prayers gratefully received.

Two of my friends have just had their baby a couple of weeks ago - a gorgeous baby boy named Max. I've been told he's gorgeous by the proud grandparents - I haven't seen him yet, but knowing the parents I'd say they're probably right!!

Two more friends emailed to say that they are expecting baby number five in April. And on Saturday another friend said she was expecting her second baby around April/May time.

I don't quite understand what is going on. Each time I try to upload an image so that I can add it to my post, the little triangle beside the "Uploading Image to Blogger" message gets blocked out by a grey-ish square and after a minute or two more I get a "Cannot find server" message.

This is patently stupid, because I can still put up posts, which presumably go to the same server...

Anyway, I've tried refreshing the page, emptying my cache, re-booting my computer... all to no avail. This is irritating, as just for once I have some decent pictures I want to put up.

I've contacted Blogger Help but haven't heard anything yet...

Miles Jesu are visiting our parish each evening this week - and in addition to a Holy Hour we've been treated to talks from various speakers.

Yesterday Fr Richard Whinder gave a fascinating (and enlightening) talk on the Church in the Middle Ages. He pointed out that England was noted throughout Christendom for its devotion to Our Lady (hence the title Dowry of Mary), for its many great saints, for its Universities and for its great Religious houses.

He painted a picture of the medieval Church which was very much at odds with the popular ideas promoted in the media. In view of my last post, I was very entertained by Fr Richard's comments on the role and status of women in Christian Europe: a position not held under the rule of the Roman Empire, and lost again at the Renaissance when Roman law was "rediscovered" and reimposed.

Fr Tim managed to put up a post before me YESTERDAY, but he didn't have his camera handy and so didn't get a shot of Fr Richard (it has become a bit of an in-joke: for a priest who doesn't have a blog himself, he seems to crop up with amazing regularity in posts by UK Catholic bloggers, usually in the photos!) I didn't have my phone with me (I don't have a digital camera, but my phone works pretty well!) BUT Fr Richard kindly sent me a photo I could use to adorn this post... and so get one over on Fr Tim!!

(Unfortunately, the best-laid plans and all that... Blogger seems to be throwing a strop at the moment, so I can't upload the photo. I shall put the photo up as soon as the system sorts itself out.)

UPDATE: I've finally sorted the problem... by changing both the computer and the browser... so here is the picture: 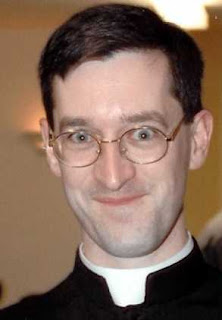 I get more than a little annoyed when people criticise the Church for not giving enough "power" to women. Of course, what they really mean is that women are not "allowed" to be priests. I'm not proposing to go into the theological justification for this (although I might give my opinion another time), just suffice it to say that I totally concur with the teaching of our Holy Mother the Church (funny, but none of the PC crowd ever object to that use of gender-specific nomenclature!)

Quite apart from the fact that those misguided souls who are calling for women to be admitted to the priesthood obviously have a very warped conception of what the priesthood actually is (because they equate being a priest with being "powerful") but they also rather miss the point when it comes to the attitude of the Church towards women.

Yes, there have in the past been some individuals in the Catholic Church who had a rather ambivalent view of sex and women, etc. etc. I'm no historian, and I don't know all the ins and outs of gender politics during the past two millennia (but let it be noted that the Protestant Church has had an even more ambivalent attitude - burning (female) witches being a more predominantly Protestant activity!) But whatever may have been said by individuals, the fact remains that the most powerful human being throughout the history of the Catholic Church is a woman.

Our Lord and Saviour was born of a woman. He was carried for nine months in the womb of a woman. Our God became incarnate, and he asked for the co-operation of a woman. Joseph was the foster-father of Jesus. Mary was truly his mother.

Our Blessed Lady is often dismissed as a poor role-model by feminists. They point to the emphasis on her virginity, and use this to claim that the church only approves of women who are either perfect virgins (impossible for most women to imitate) or saintly repentant prostitutes (citing devotion to Mary Magdalene as evidence for the latter). This feminist view ignores the truth: Mary's virginity is not valued because procreation is somehow degraded and sinful - a very Gnostic attitude, and condemned by the Church as heresy - but because it shows that Jesus did not have a human father: he is truly the Son of God, not just a man given divine power.

Another reason for Mary's dismissal as a role-model for modern women is the portrayal of her as a very insipid character. She is a model of humility, of obedience, of total submission to God. Milk-and-water meekness and goodness. Very unfashionable.

I beg to differ. Our Lady appears infrequently in the Gospels, but her character as revealed by those appearances is anything but insipid. When the Angel Gabriel appears, she asks for clarification of what she does not understand. If a supernatural being suddenly appeared to me, I don't think I would have the courage to ask questions! At the wedding feast at Cana, Mary takes the initiative and tells Jesus that the newlyweds are in dire straits. She trusts him to do something about it - and is so confident that she orders the servants to "...do whatever he tells you." Nothing insipid about that.

And then there is Mary's presence during the Passion. Unlike those terribly brave (male) disciples of his, Mary ran off because she was afraid... umm, no, I don't think so!!

I have just finished reading The Glories of Mary by St Alphonsus Liguori (1696-1787). He assembled as much information about Our Lady as he could find from the writings of the Saints, Doctors of the Church and other holy authors as well as from Sacred Scripture. And although he writes much about her mercy towards those who call upon her, especially sinners, the person who emerges from the pages is far from insipid, especially in her attitude to unrepentant and obstinate sinners:

"...he [the sinner] saw the most Blessed Virgin Mary, who said to him: 'Presumptious man that thou art, dost thou dare to appear before me? Depart hence, and go to that fire which thou hast deserved.' "

The book I read just before this one was True Devotion to Mary by St Louis-Marie Grignion de Montfort (1673-1716). In it, St Louis-Marie describes Mary as having power and authority even over the angels:

"...God has made her queen of heaven and earth, leader of his armies... destroyer of his enemies..."

And to leave absolutely no room for doubt,

"...The most fearful enemy that God has set up against the devil is Mary, his holy Mother."

Anyone described as "queen of heaven and earth," "destroyer" and "most fearful enemy" is far from weak. Mary's power, given by God, would make her truly terrifying were it not for her love towards us, her children, entrusted to her by Jesus on the cross. If it were not for this merciful love, we would indeed fear to approach her. Devotion to Mary is not mawkish sentimentality and veneration of spineless subservience. The 12th century hymn, "Daily, daily, sing to Mary," ascribed to St Bernard of Cluny, makes this very clear:

"All our joys do flow from Mary, all then join her praise to sing;
trembling, sing the virgin mother, mother of our Lord and King,
while we sing her awful glory, far above our fancy's reach,
let our hearts be quick to offer love the heart alone can teach."

As a woman, I would count myself blessed if I could imitate even some of Mary's virtues. The true Mulier Fortis is a role-model to rejoice in.
Posted by Mulier Fortis on 4.12.06 3 comments: