Well, that's the end of the Quarant'Ore at Blackfen for another year. It's very strange, but, as the Blessed Sacrament is reposed in the Tabernacle after being exposed for the forty hours, there is a terrible sense of loss. I'm not the only person to have noticed it - and yet, Our Lord hasn't gone anywhere. He still awaits us in the Tabernacle of every church, and at every Mass.

I said it in my last post, and I'll say it again - it really is a tremendous privilege to be able to assist at the Forty Hours, even if only for a short time.

You can read Fr. Tim's account of it, and see a few more photos taken during the Forty Hours over on Flickr.
Posted by Mulier Fortis on 27.10.12 No comments: 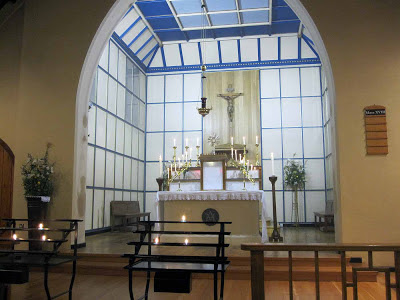 On Thursday we are starting our annual Forty Hours' Exposition, commonly known as the Quarant' Ore. It's a wonderful event. It starts with Mass, and a Procession, and a Litany, and then Our Lord is exposed on the Altar for Adoration for the next forty hours (hence the name.) Then everything finishes with another Mass, Litany, Procession and Benediction (I think... I'm a bit hazy on how it ends because I'm usually keeping my eyes open with matchsticks by this point...)

It is a tremendous privilege for the Parish to have the Quarant'Ore. People can come along to the church whenever they can, for as long a time as they want... or, if only for a few minutes, that's ok as well. If you are fortunate enough to be able to attend at the end, there is a palpable sense of loss as the Blessed Sacrament is reposed in the Tabernacle. It is incredibly moving.

It reminds me of my own return to the Church, twenty years ago - and it's as vivid as if it was yesterday - I became aware that Our Lord is waiting for each one of us, waiting for us to turn and face him, to spend some time with him, to invite him into our lives. He will never force himself upon us, he just waits for us to recognise him and accepts whatever acknowledgement we give him.

It rather brings a lump to my throat just thinking of how immensely patient he is with us.
Posted by Mulier Fortis on 24.10.12 No comments:

Rorate Caeli reports that Bishop Williamson has been expelled from the SSPX. Given how close the SSPX seemed to get to being brought back into full communion with Rome (is that the right term?), it will be interesting to see if this makes any difference.

No, I don't really understand all the ins and outs of the situation. Archbishop Lefevre defied Rome and ordained priests and bishops - and Bishop Williamson was one of those bishops. If he now goes off and ordains priests and bishops, will there be another breakaway group? And what happens next?

I do, however, hope this paves the way for reconciliation of the SSPX...

I also wish that someone would write an idiot's guide explaining the whole thing...
Posted by Mulier Fortis on 23.10.12 3 comments: 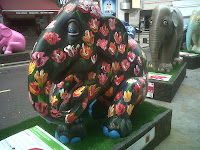 You can see some more photos I took during my visit to Rome over on Flickr. I've still got two days' worth of photos to label, but you can have a look at what I've done so far...
Posted by Mulier Fortis on 21.10.12 2 comments:

The Grotto at Lourdes, the site where Our Lady appeared to St. Bernadette, is currently under about 3 feet of water.

After days of torrential rain, the River Gave burst its banks, and pilgrims were evacuated from nearby hotels along with about 40 people who were forced to leave their homes.

The basilica itself is still accessible, according to the report on CNA. I assume they mean the Immaculate Conception basilica and Crypt, at the top of the ramps, rather than the Rosary Basilica itself, which is on the lower level, though, as the entrance to the Rosary basilica is up some steps, it's just possible that this is above the level of the flooding.

I love Lourdes, and have been there on pilgrimage several times. Being in a mountainous region, it does get rather a lot of rain. When I went there in 2009, it was pretty wet... it rained so hard one afternoon that my mascara was washed down my cheeks. I made sure I wore waterproof mascara after that. The locals were speculating then on whether the Gave would burst its banks, and we were told that Brancardiers had been piling up sandbags along the banks on the opposite side to the Grotto. I took a photo of the bridge across the Gave near the Grotto... 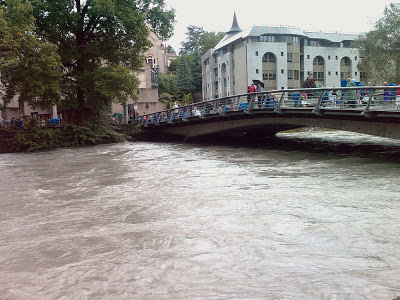 You can see how much more space there is under the bridge. You can also see how high the wall is on the Grotto side of the river. The current downpour is said to be the worst in 25 years.

The photo below is a shot of the Grotto, taken from the point at which St. Bernadette had been kneeling when she saw Our Lady (if I recall correctly) - and I've included this one because of the altar and the candle stand. Admittedly, the stand does change in height depending on which candles are placed in it... 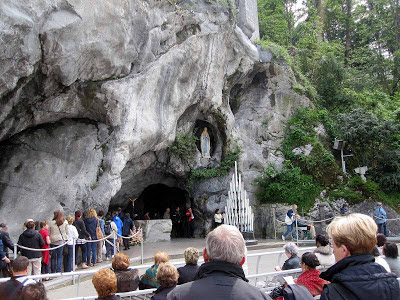 And now, for comparison, have a look at the following pictures of the Grotto yesterday... Check out the top of the altar in the first picture...

Twitch of the mantilla to Fr. Ray Blake for those last two photos.

CNA had the following video clips from Friday, showing the rising water levels. It's heartbreaking to watch.

Fortunately, there don't seem to have been any deaths, and at least this happened at the end of the pilgrimage season, so those affected will have some time to get things sorted out before next year.

The webcams in Lourdes are down at the moment, due to the flooding. Pray for all the pilgrims, and all those who live and work in Lourdes.
Posted by Mulier Fortis on 21.10.12 No comments:

Maybe it is something to do with the weather...

It seems as though my two Monsignori are not the only kitties with relationship problems. Larry, the Chief Mouser to the Cabinet Office at Number 10 Downing Street, had a spat with his next-door neighbour, Freya, the First Moggy of the Treasury.

Police were called to break it up. No-one, other than the two protagonists, knows whether "Hiss. Spit. Snarl. Miaow" translates as "You don't run this government, you plebs" and Google Translate doesn't have "Cat" as an option (yet) which is possibly why there have been no calls for the resignation of either Larry or Freya.

Larry does have form. His first major photocall was marked (literally) by him scratching a reporter. He also doesn't seem to be particularly effective at his job. I have only heard of one dead mouse being presented to David Cameron during the whole of Larry's time in office. A simple glance at the sidebar tally (Kitty Kill Count) will demonstrate what really keen kitties can achieve. The Opposition appears to be woefully negligent in not calling for a full enquiry...

In other news, my Monsignori appear to have called a truce. They actually rubbed heads and noses yesterday, and Furretti licked Miaowrini's tail. At the time of writing, Miaowrini is curled up on the sofa and Furretti is sprawled out above the computer monitor. It won't last...
Posted by Mulier Fortis on 21.10.12 No comments: