The Fruits Of Ecumenism...?

Leutgeb, presented His Hermeneuticalness with a home-grown tomato, so that he could slice it through the transverse plane and enjoy a truly Christian fruit in his sandwiches, rather than slicing it through the sagittal or coronal planes to reveal a crescent. Zephyrinus asked if crescent-shaped fruits were to be declared anathema...

Absolutely not, I countered. Any fruit or vegetable which revealed a crescent shape would merely have to have a statue of Our Lady plonked on top of it for it to become totally acceptable...
Posted by Mulier Fortis on 1.9.12 2 comments:

Let's be absolutely clear about one thing. It's nothing to do with equal rights for homosexuals. There is already full equality in law through civil partnerships.

Michelle Therese, who lives up in the Orkneys, has written two really clear and excellent posts on the topic. The first post was written as she prepared to attend an open discussion forum with the Scottish Cabinet. The second post was written once she got back home. Both posts (and the blog itself) are well worth reading.
Posted by Mulier Fortis on 31.8.12 1 comment: 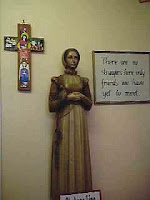 Today was the feast of one of my patron saints - St. Anne Line. I wrote a chapter about her which was published in English Catholic Heroines - my only claim to fame as a "proper" author... though I have written a couple of small pieces for the Catholic Herald (they must have been short on copy!)

I chose St. Anne as a patron saint because I liked her acerbic tone, first at her trial and also at her execution by hanging at Tyburn. On being asked whether she repented of her "crime" of harbouring a Catholic priest, she retorted that, "...so far am I from repenting that I would I could have sheltered a thousand!"

That feisty attitude in defence of the Catholic Faith, her clear understanding that, without priests, there would be no sacraments and therefore no Church, plus the fact that she taught children and showed hospitality to priests, really struck a chord within me. St. Margaret Clitherow and St. Margaret Ward, who share St. Anne's feast day, never captured my heart in the same way, although they, too, lived and died heroically.

About 8 or 9 years ago I went with Joanna Bogle on a mini-pilgrimage to find out more about St. Anne - at the time there were only three articles on the web about her life, and details were extremely sketchy. You can read more about my pilgrimage there.
Posted by Mulier Fortis on 30.8.12 1 comment:

And So It Starts Again...

The first question most teachers get asked as soon as the summer holiday starts is "So, when do you start school again?"

I have never quite worked out the reason for this question... though I have speculated that it is either from jealousy (let's be honest, six weeks' holiday every year in the summer is quite a perk!) or desperation (usually from parents who are very keen to send their offspring back to the classroom... though, to be fair, they tend to wait for a week before they ask.)

The shops are always keen to remind us that school is lurking - "Back to School" stuff has been there since the start of August. One of Leutgeb's Facebook friends appears to have spotted one shop with a particularly negative view of the local schoolchildren...

How Not To Do A Picture Restoration... 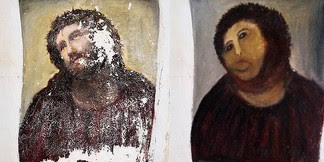 This lunchtime, after Mass, His Hermeneuticalness was showing some young parishioners images of the restored fresco which hit the news a few days ago. Jacinta remarked that it reminded her of the Mr. Bean sketch... and then, on seeing all our blank faces, she apologised for being "too young."

I hadn't seen the sketch, but thought I would probably find it on YouTube. Sure enough...

Annie Elizabeth and I have gleefully noted that the number of women wearing mantillas at Mass is going up. Of course, under "mantilla" I also include scarves and shawls used as head coverings. Hats are quite good too, but one doesn't tend to see so many of them, except at weddings - and then they are, more often than not, just little scraps of feather and net.

The reason I wear a mantilla in church is that it is a way to show reverence and humility in the presence of God. A woman's hair was traditionally considered to be her crowning glory, and it was considered an act of humility to cover it before God. I also find the act of putting on my mantilla before I enter the church to be a useful moment of reflection.

It didn't take long to get used to it, and now it's second-nature. This was brought home to me when I found myself in Victoria a couple of weeks ago without a mantilla in my handbag. I had four of them in my car, but since it was one of the rare occasions when I was using public transport, they weren't much use! I felt positively undressed, and incredibly self-conscious, despite the fact that no-one would have batted an eyelid if I hadn't worn one.

I then had a brainwave - I shot into the St. Paul's bookshop next door. Yes, they sold mantillas - one size, one style, rather ghastly... and overpriced as well. June Wood, the lady who makes mine, uses much nicer materials, beautifully finished and for half the price. However, I wanted a mantilla in a hurry, and I figured that it would teach me not to leave home without one again!

When I recounted my experiences to Annie Elizabeth, she told me about the church at Ecône, where the church porch has a rack with a variety of scarves and shawls available to borrow... thinking about the amount of money I had to pay for my scrap of material, I rather wish I had been more creative in my thinking, and had bought a nice scarf instead.

Now Annie Elizabeth and I have formed the Blackfen branch of the Mantilla Mafia. First challenge: to figure out how to get Leutgeb to wear one...
Posted by Mulier Fortis on 26.8.12 6 comments: