I don't read the dreadful "fishwrap" (to use Fr. Z's phrase) often referred to as The Bitter Pill, but which I think is more accurately described as The Suppository. It just upsets me to see a publication which is in such obvious opposition to the Holy Father and the teachings of the Church being allowed to call itself a Catholic newspaper.

Seeing that it is supported by the Hierarchy of England & Wales (it is, after all, on sale openly at the back of both Westminster's and Southwark's Cathedrals) makes me fume.

Generally, as I say, I succeed in avoiding it.

Occasionally, however, it outdoes itself and its erroneous (and heretical) articles need to be challenged.

Like the issue which has tried to suggest that actually the Church's teaching on abortion isn't quite as definitive as we've been led to believe, and that the Church's "current position" is open to further change.

James Preece did a very good piece on this issue. But WHY is it being left to bloggers to challenge heresy?

As far as I can see from the parts of Tina Beattie's article I could bring myself to read, she is trying to suggest that direct abortion of the foetus before ensoulment was considered to be less grave than a later abortion.

"But there are grounds for reconsidering the Catholic Church’s present position on abortion by appealing to the wisdom of its own tradition, which is less rigid than the present hierarchy would have us believe. The claim that all abortion is tantamount to murder finds little support in pre-modern theology. Until the late nineteenth century there was widespread debate as to the morality of early and late abortion, with a widespread consensus that early abortion was a less grave sin than late abortion. This was informed by the belief that ‘ensoulment’ was not simultaneous with conception, but that the early foetus went through various stages of pre-human development before it acquired a soul and became fully human."

It may have been considered "less grave" to abort , but it was still a mortal sin. I believe that the "less grave" distinction was only relevant to the Confessor in deciding what penance should be given. In addition, as Red Maria has pointed out previously in an excellent article, the whole "ensoulment" argument is a massive red herring employed by the pro-abortion lobby when trying to argue against the Church's teaching.

Ensoulment is an Aristotelian concept, which wasn't ever official Church teaching. In contrast, the prohibition against direct abortion has always been official Church teaching - it was something that marked out Christians from the society around them, as noted in the Didache, a document from the first century, and by Tertullian, a second century writer.

The fact that this appalling dissent from Church teaching is being given a platform in what is supposedly a Catholic publication is a disgrace. It does not reflect well on the Hierarchy of England and Wales that this sort of dissent is allowed to pass unchallenged.

It's time that The Suppository was flushed down the toilet.
Admittedly this might be considered unkind to sewer rats.
Posted by Mulier Fortis on 23.6.10 5 comments:

The crazy friends I mentioned before - the ones who think cycling all the way to Rome from Sidcup is a good wheeze (I hope not literally) - have started up their own blog, Via Romea as a way of keeping everyone back home up-to-date with their progress.
There go my hopes of a blogging exclusive!

Getting sponsorship for the journey in aid of two such great charities is a tremendously generous way of turning a holiday/pilgrimage into something that bit more special. Do consider helping out if you can.

There is a proper route map on the blog. I have to confess I preferred their original one...
Posted by Mulier Fortis on 23.6.10 No comments:

Yet More Photos From Lourdes... 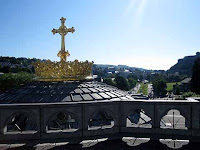 Yes, I did take quite a few photos, and yes, I am determined to share! However, this year I thought I'd arrange the photos according to theme rather than the day on which I took them; hence, I've already done a post on Bartrès, another on the Masses we had in various places, and a post showing off some of the more spectacular photos (IMHO) particularly from the torchlight procession.
I decided that, for this post, I'd take the opportunity to show one or two of the photos I shot around the Domaine, the main shrine area. Yes, I am showing off my snazzy camera's capabilities!!
I love this photo, because of the blue sky and vividly green trees contrasting with the white and gold Basilica. The area is quite empty, the professional photographers have cleared away their benches, and there aren't many people around: most of the pilgrims have had to scoot back to their respective hotels for lunch. 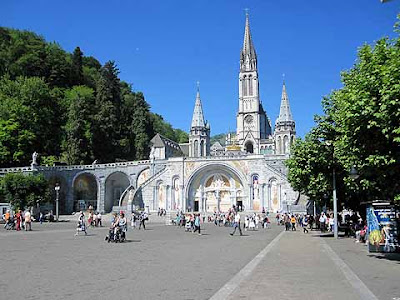 Walking down from the Crypt level, there is a flattish area which provides a perfect spot for photos of the Immaculate Conception Basilica and the Crypt (the dome you can see is part of the Rosary Basilica) and for the Esplanade looking right down to St. Michael's Gate at the far end. 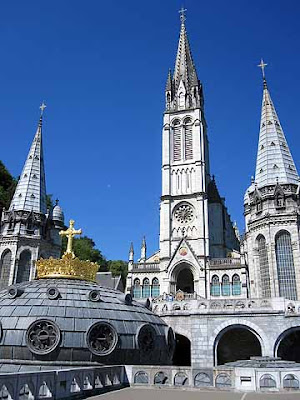 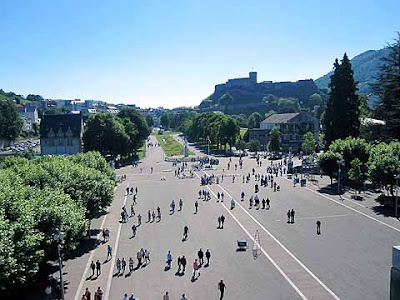 The ramps down are surprisingly steep, and quite hard on the old knees. Anyone pushing a wheelchair up this part is definitely stacking up days off Purgatory... 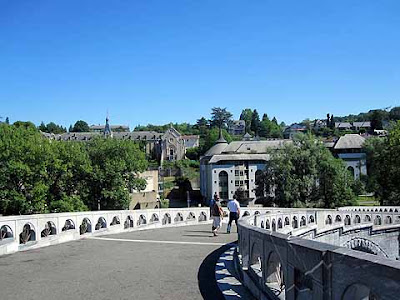 I paused for breath, and also to take a photo of the bridge over the River Gave, the level of which was considerably lower than the previous year when it actually overflowed the banks! 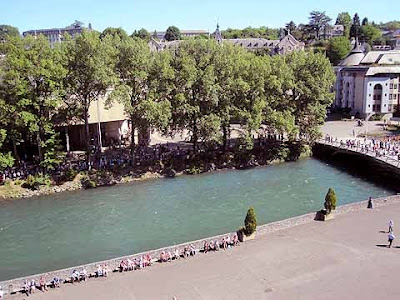 Rather confusingly, St. Michael's Gate has statues of all three archangels, but it's easy to tell which one is which if you know what to look for...

First, there is St. Michael himself, defeating Satan... 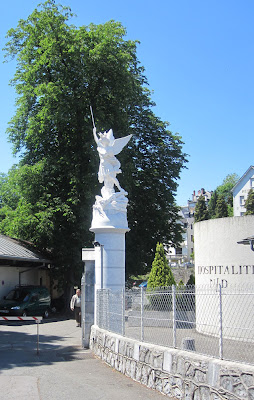 ... then there is St. Raphael. He's shown carrying a fish, a reference to the story in the Book of Tobit. 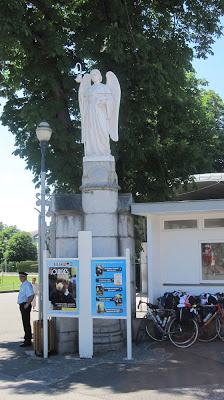 And finally, St. Gabriel is shown carrying a book, some lilies and holding up a hand as if to make a pronouncement... 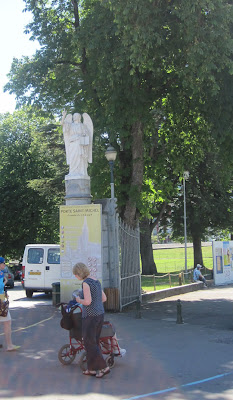 Finally (for this post) I have this shot of the three Basilicas taken from the area by the water taps, next to the River Gave. Sadly, I got this photo on the one day when the sky was clouding over. Never mind, there's always next year! My next photo post will be some shots I took in the Grotto itself...
Posted by Mulier Fortis on 20.6.10 2 comments: