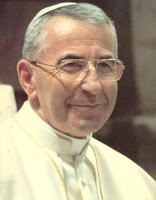 I've made a little progress, I think... I have succeeded in weaning myself off the on-all-night radio which resulted in me waking up in such a foul mood as I gradually became aware of the latest anti-Catholic, anti-life, amoral slant of the BBC on whatever was in the news.
I still listen to Radio 4, but more as an aid to drifting off (generally during the 11pm comedy slot) and it is on sleep mode, so switches itself off after an hour.  Unfortunately, I haven't quite managed to stop myself listening in the car.
Today, on my way home after a fabulous Missa Cantata and a very enjoyable lunch in the Robin Hood & Little John pub, I flipped on the radio.  It was obviously the afternoon play, and I quickly realised that it was about Pope John Paul I.  I should have switched it off then and there, but I was intrigued that a play could have been written about a Pontificate which lasted only 33 days.
After 10 minutes, I couldn't take any more.
Pope John Paul I was presented as a simple man who was horrified to find himself elected Pope, and was uncomfortable with all the trappings of the Papacy.  In the teeth of his advisors, he indicated that he wished to do away with all the pomp and circumstance; he kept emphasising that he was a priest, and wished to be treated, first-and-foremost, as a priest: "I am a priest, not a king!" he declared, as he indicated that he would abolish the papal tiara.
This may well be the case: I know little of Pope John Paul's pontificate, and I believe that he walked into St. Peter's for his coronation rather than being carried, and that he wasn't crowned with the papal tiara.
But what upset me was the tone of the piece.
The Pope was portrayed as a reformer, a simple, but very determined, man, who was fighting against the "powers-that-be" in his mission to return the Church to "the people."  Much was made of his struggles with the advisors, who were doing their utmost to maintain the status quo, so much so that they were actually described as being his enemies.
And then there was the issue of artificial birth control.  The Pope was supposed to have declared, several times, that the encyclical Humanae vitae was, quite frankly, wrong, especially in view of the population crisis, and the Pope was calling for another review.  He also claimed that the media briefings were not his own words, but that his views were being distorted and misrepresented: one of the cardinals even went as far as to say that all copies of the Pope's previous pronouncements in favour of artificial contraception had been located and hidden in the Vatican Secret Archives.
The implication was that the Pope's enemies were horrified that the Pope might want to change the Church's "policy" on artificial contraception, and therefore arranged for his death.  I have to say that I may be jumping to conclusions here, as I was so disgusted by the blatant bias and obvious agenda of the BBC in putting this play on the air that I switched the radio off. However, if anyone can prove to me that the play actually ended differently, then I'll send them £10.
But, of course, Mark Thompson is a Catholic, and they listened to the viewers and didn't actually show Popetown (selling it elsewhere doesn't count!) so you can't possibly accuse the BBC of anti-Catholic bias...
Yeah, right... and I'm the next Pope.
Posted by Mulier Fortis on 4.10.08 6 comments: I was interested to learn, via the BBC, that the excavation of Cardinal Newman's grave has failed to find his body...
It turns out that he was not buried in a lead-lined coffin, and, although an inscribed plaque from the coffin, and brass, wood and cloth artefacts were found, no trace of his body remained.
According to Peter Jennings, speaking for the Birmingham Oratory, "burial in a wooden coffin in a very damp site makes this kind of total decomposition of the body unsurprising."
Personally, I would have expected the bones to decompose rather more slowly than wood or cloth,even in damp conditions, but I don't claim to have any specialist knowledge of decomposing bodies.  However, the thing which puzzled me was the attitude of the BBC report:
"Newman's body may have decomposed, as his coffin was not lead-lined," and, "Newman's remains are thought to have decomposed."
I am somewhat puzzled as to what else they consider might have happened...
Posted by Mulier Fortis on 4.10.08 2 comments:

It's going to be quite a busy week, I think. Our regular monthly Missa Cantata with our visiting schola is on Saturday morning, and then there's the usual Sunday Missa Cantata with our choir singing the Rossini propers, and, to celebrate Rosary Sunday, Rosary and Benediction in the afternoon.  I don't know if there's an extra Mass on Monday (Fr. Tim has started saying an extra evening Mass when he gets back from the seminary, unless he's visiting somewhere (like Maiden Lane))  Then, on Tuesday evening there is a Solemn High Mass for the Feast of Our Lady of the Rosary. On Wednesday, I have a few after-school meetings, Thursday is Rosary and Benediction night, and Friday night there is the regular Low Mass at Chislehurst (7:30pm.)  Oh, and I have to teach, mark books, and plan lessons.
Eating and sleeping will have to be fitted in somewhere...
Not sure about blogging.  I might have to take a week off...
Posted by Mulier Fortis on 3.10.08 No comments:

... having to put up with appalling spelling from those I teach.  Leutgeb appears to have the same problem...
Posted by Mulier Fortis on 3.10.08 2 comments:

October... Month Of The Holy Rosary

I like October.  I suspect this has something to do with the fact that September is over, and therefore the first (and longest and toughest) term is more than halfway through: the half term holiday is always at the end of October.  After the stress of breaking in new classes, the first holiday of the new academic year is always a welcome break.

October also sees the feasts of several of my favourite saints, in the Novus Ordo calendar, that is... The Guardian Angels (2nd October) is quite an important feast (yes, I know it has the rank of memoria but saints' memorial days doesn't sound right!!), as I love to think about how confusing angels must be to Protestants and liberal Catholics: after all, Jesus himself said that we each have our own angel, so it's very Scriptural to believe in angels, but they're not very fashionable because, well, frankly, they're a bit redolent of medieval piety, and you can't exactly rationalise away an angel the way that you can, say, explain away the feeding of the five thousand as the miracle of everyone sharing their packed lunches.
Angels are, in a way, the spiritual realm getting a bit "in yer face" and challenging you to believe, or not.
My Guardian Angel is, I am sure, white-haired and hitting the vodka-valium cocktails while checking the small print of the contract he signed up for at my conception... he's gotten me out of quite a few hairy situations... 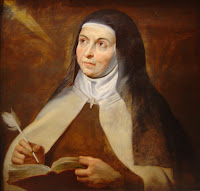 Other favourite saints include St. Teresa of Avila (wonderfully ascerbic), St. Margaret Mary Alacoque (introduced devotion to the Sacred Heart), St. Ignatius of Antioch (barking mad... was planning to force the lions in the arena to eat him if they seemed reluctant), St. Luke (all those wonderful infancy narratives), and St. Jude (patron of hopeless cases.)
And there are more saints with October feasts to celebrate, though I'm not quite as devoted to them: St. Thérèse of Lisieux (a little too saccharine-sweet for my tastes), St. Francis of Assisi (he's been hijacked a bit too much by the green lobby, and I can't stand "Make me a channel of your peace"!), St. Edward the Confessor, St. Paulinus of York, and St. Simon (he loses out a bit because of sharing his feast with St. Jude.)

But, of course, the most important feasts in October have to be Our Lady of the Rosary and also Rosary Sunday.  The Rosary is a wonderful prayer.  It takes a bit of getting used to, and you have to get over the idea that you need to pray each "Hail Mary" meaningfully, but once you realise that this is just a "background chant" to your meditation on the Mysteries, the Rosary becomes easy and a huge comfort in times of trouble.
My parish being Our Lady of the Rosary, Blackfen, we celebrate both feast days in style!
For Rosary Sunday, we've got the recitation of the Rosary and Benediction in the afternoon.  For the Feast of Our Lady of the Rosary (Tuesday, 7th October) we're having a Solemn High Mass (I think!) in the evening (though possibly a Missa Cantata, if we can't get a deacon and sub-deacon.)  It's going to be a real treat! 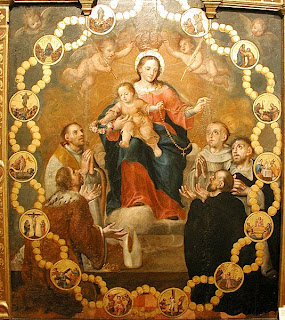 ...Life really is very hectic at the moment, and I haven't got the time, energy or patience to sift through the news at the moment: needless to say, most of it is pretty bad!
The HPV vaccine in schools controversy is simmering in the background, and the HFE Bill rears its ugly head with people agitating for fewer restrictions on abortion. Fr. Blake has a couple of reports on the increasing violence against Christians in India.
There is more, but I really need a break...
So, here's another cat picture.  Proper blogging will, hopefully, recommence shortly. 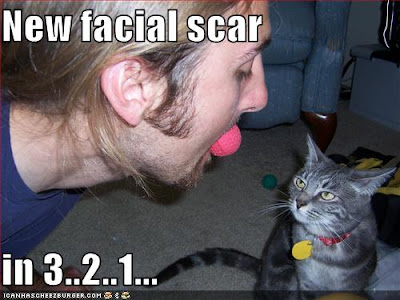 ...Sorry, but whatever else he has done pales into insignificance beside this one: he met Mel Gibson. And talked to him. And suggested a scene for his film, The Passion of the Christ.  Like, wow!  You can read more about it HERE... 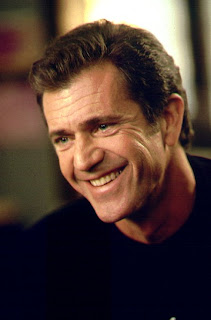 I love the "I can has cheezeburger" site.  Lots of cat pictures.  Silly captions.  Not quite sure where the odd, mixed-up words come from, but it really fits.
Posted by Mulier Fortis on 28.9.08 3 comments: