The I Can Has Cheezburger? Team have started a related blog, Dreaming of Kittens, for pictures and videos of cute napping kittens. Slightly less compulsive viewing than the LOLcats (there are no witty captions) but definitely "up there" in the "ahhhh" stakes.
Having crashed out for five hours this evening (ooops) I can sympathise with this little one...
Posted by Mulier Fortis on 18.9.09 3 comments:

Some of my students really have a weird outlook on life.
Handing out some worksheets to one of my new Year 8 classes, I was stopped by one boy who wanted to know why, if I was called "Miss," I wore a wedding ring.
I explained that I had taken vows. "So, you're, like, married to God then?" queried another student.
This caused some consternation: "What? So does that mean you can't get a divorce?"
I hope that the fleeting consideration which flitted across my mind of how one could possibly go about claiming any alimony doesn't constitute a mortal sin...
Posted by Mulier Fortis on 16.9.09 3 comments:

The Seven Dolours of Our Lady...

This morning started badly - the shower attachment on my bath taps gave up the ghost in most spectacular fashion, resulting in my bathroom floor being completely awash, while my hair wasn't. Not wanting to be late for work, I decided to deal with it all when I got home...
So, after a fairly hectic day, I abandoned the pile of books waiting to be marked, and high-tailed it out of school in order to get to one of my local shops which sells householdy-type things. Being home much earlier than usual, I washed my hair, stuck something prepackaged in the microwave, and settled down in front of the computer for a quick browse through the blogs.
Patricius has a beautifully reflective post on the Stabat Mater, in which he mentioned that his favourite version was the one by Aniero. I checked the (small) collection of classical CDs in my possession, and then went on to You Tube in the hopes of finding it there, but no joy. Instead, I found the following version by Palestrina...
I used to have a Rosary of the Seven Dolours: I acquired it soon after I returned to the Faith, seventeen years ago (I don't remember the exact date, but it was some time in September: the 24th Sunday in Ordinary Time, Year C to be precise... this meant that the Gospel was the one which read "There is more rejoicing in heaven over one repentant sinner..." and, having just been reconciled to the Church, I sat and sobbed through the sermon. Very moving!) I was drawn to Traddy devotions and prayers before I actually realised that they were Traddy.
Anyway, the Seven Dolours Rosary (or chaplet, actually) consists of seven groups each of seven beads, separated by seven medals, one for each of Our Lady's seven sorrows. There are also three extra beads, representing the tears shed by Our Lady at the foot of the Cross, and a medal of Our Lady of Sorrows.

The seven sorrows of Our Lady are:
1. The prophecy of Simeon.
2. The flight into Egypt.
3. The loss of the Child Jesus in the Temple.
4. Mary meets Jesus carrying His cross.
5. The Death of Jesus
6. Mary received the body of Jesus from the cross
7. The body of Jesus is placed in a tomb.
Posted by Mulier Fortis on 15.9.09 2 comments:

I don't seem to have much in the way of blogging time at the moment. However, today was the second anniversary of the Promulgation of Summorum Pontificum, and I sort of felt that I couldn't allow it to pass without comment of some sort...
The best comment is actually to be found by watching Fr. Tim's video...
We had an extra Mass in the parish this evening, in the Extraordinary Form, which was fortuitous.
It also happened to be the Feast of the Exaltation of the Holy Cross... and, as Fr. Tim has a Relic of the True Cross, those of us present were able to venerate it.
I feel as if I've been crammed full of blessings... that sounds all wrong, but you know what I mean, I'm sure... My cup truly runneth over...
On that cheerful note, I'm off to bed. More soon.
Posted by Mulier Fortis on 14.9.09 No comments: 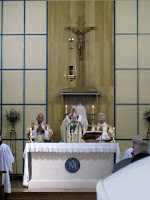 Yesterday, after the usual Saturday morning Mass and devotions, we had a special Mass to celebrate the 25th Anniversary of the parish's Padre Pio Prayer Group (it doesn't sound quite right calling it the "Saint Pio Prayer Group!") Braz, one of our deacons, was responsible for starting the Prayer Group; he recently left the parish in order to go and live with his daughter, and the Mass provided a good opportunity to say goodbye...
The ladies of the UCM really pulled out all the stops to provide a wonderful buffet lunch... 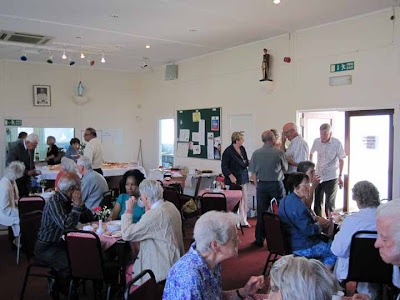 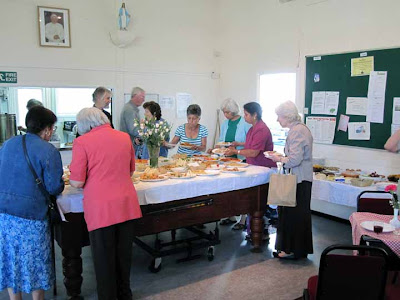 And here we have (from right to left) Fr. Tim, Hilda (leading the Prayer Group), Deacon Braz and another lady (in the pink top) who, I think, co-ordinates several Padre Pio groups. I didn't quite catch her name. 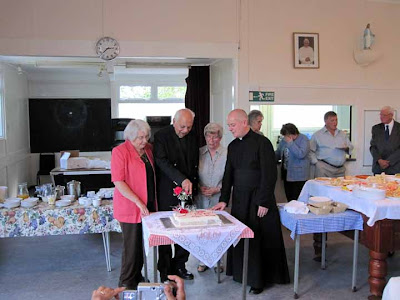 Jo made the most delicious chocolate cake (actually, she made two, but the other one had been eaten by the time I got to take the photo), and I think there must have been a deliberate ploy to get me to ingest a few vitamins: 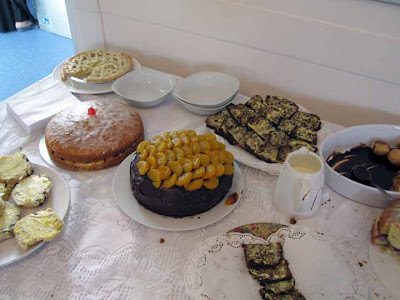 ... putting tangerine segments on the chocolate cake is certainly the most reliable way to ensure that I eat more fruit...
Posted by Mulier Fortis on 13.9.09 4 comments: