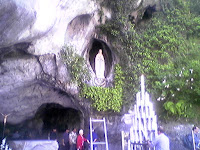 I am getting so excited. The parish trip to Lourdes is very near, and I'm desperately racking my brains to see what I've forgotten.

The coaches have been booked. I need to put the contact numbers for the English coach company and the hotel just in case there are any last-minute glitches. I have spoken to my contact at Gatwick Airport, and she has promised that we get our own dedicated check-in, and that the seats and luggage tags will have been sorted out the day before. So that should be fairly straightforward.

That reminds me: I need to print out little cards for everyone with the flight number, time and booking references, and to print out little luggage tags to make luggage retrieval easier. Having a tag with a picture of Our Lady on it means that it's less likely to be grabbed by someone else by mistake (as happened one year!)

I've printed and collated the pilgrimage booklets - these have copies of the itinerary inside, as well as hymns and readings for the Masses, as well as the most common chants sung during the processions, and the Hail Mary in several different languages, including Latin. And I have printed out the notices for each day on headed paper so that we can post them up on the hotel noticeboard. That also has the added advantage of annoying any reps from other tour operators if they have pilgrims staying in the hotel!

On a personal level, I have my passport, my European Health Insurance Card, and my insurance documents. I also have my holiday Euros to spend on rosaries. And don't bother telling me that "Euro" is actually the correct plural. I don't care... I've got plenty of catfood in for Sylvester, and my next-door neighbour is primed and ready to make a fuss of him.

The Curt Jester has moved... his blog is now HERE if you want to update your bookmarks and blogrolls...
Posted by Mulier Fortis on 24.5.08 No comments: 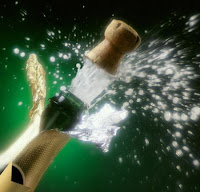 I am extremely glad that it is the start of the school half term holiday. This is a really manic time of year for us poor Science teachers, as coursework needs last-minute tweaking, marking, re-tweaking and re-marking, and then the marks have to be sent to examiners, after which the coursework for particular students has to be taken out, annotated, verified and sent off.

There is also the pressure of getting the exam courses taught before the students have their exams... many of which have started, so you try to teach a lesson on stem cell research, only to discover that half the class are absent due to an art exam.

I am absolutely shattered.

Somehow or other, I allowed myself to be persuaded to give a talk to our parish Youth Group, about Lourdes. Unfortunately, what with workload, preparations for our Parish Pilgrimage and Corpus Christi, I didn't manage to get any time to prepare. So, directly after school, I drove down to the church and sat in the small hall putting together a PowerPoint presentation on the life of St. Bernadette and what goes on at Lourdes today... which gave me the perfect opportunity to show off some of my favourite photos!

I then went to sit in the car until someone came to open up the large hall. I was so tired, I fell asleep...

...I'm now going to have an early night. Blogging will resume tomorrow.
Posted by Mulier Fortis on 23.5.08 3 comments:

What The Bishops Tried To Stop...

It's a bit late, but I just wanted to post a couple of photos from the Corpus Christi celebrations at Blackfen today (Thursday) ... I managed to take about 350 photos, and obviously haven't had a chance to go through them all: that's a little task for the weekend, when I might get a You Tube video up. 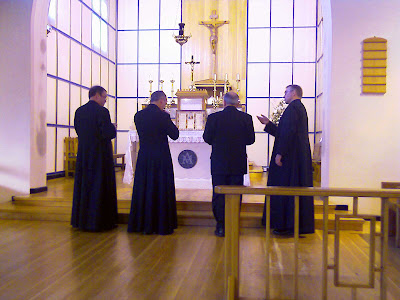 I came in early to say a few prayers, and was greeted by the sight of two priests and a deacon being put through their paces by our very experienced MC; from left to right: Fr. Charles Briggs (another of those non-blogging priests who keeps popping up on various blogs), Fr. Tim Finigan (His Hermeneuticalness), Rev. John Harrison (Fr. Charles' deacon) and Jonathan Hague (MC). 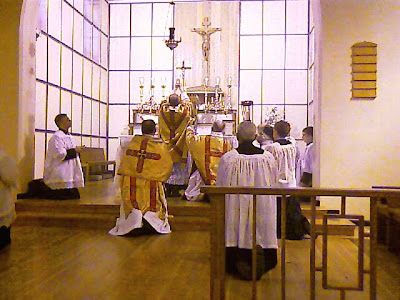 And here we have the Elevation of the Host for the adoration of the faithful, just after the Consecration. 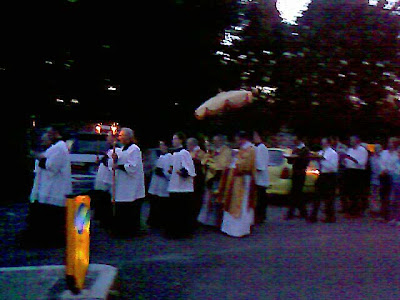 Finally, a shot of the Corpus Christi procession around the church grounds... (well, ok, the car park!) My little phone camera couldn't cope with the movement, so it's not a very good one, but you get the idea...
Posted by Mulier Fortis on 23.5.08 9 comments:

Confused? You Will Be...

This one had my head in a spin. The vice-chairman of the All-Party Parliamentary Pro-Life Group, Mrs Claire Curtis-Thomas, has come out with a real show-stopper.

"For the record, and contrary to many of the statements that I have read this week which purport to know my views, I am not opposed to abortion. I believe that women should have the right to choose; I just hope that they do not choose to have an abortion."

Which bit of "pro-life" do you think that the woman does not understand?

Mantilla-twitch to John Smeaton of SPUC, who calls for her to resign from the post.

UPDATE: An anonymous comment was made on this post which was just too good to leave languishing in the com-box...

"They need to rename it the All-Parliamentary Partly Pro-Life Group. Then they won't need to change the letterheads. Roll on the Chastisement. I'm beginning to envy the dead already."
Posted by Mulier Fortis on 21.5.08 5 comments:

Ashamed To Be British...

The Government was concerned that Britain might fall behind in the field of embryo research if the Human Fertilisation and Embryology Bill were to be defeated.

I, for one, would much rather that we weren't responsible for such monstrous research. Being the only country in Europe to allow both cybrids (human-animal hybrids where animal eggs have had the nucleus removed and human DNA inserted) and true hybrids (where human eggs (or sperm) are fused with animal sperm (or eggs) and then allowed to develop) is nothing to be proud of.

Just because a thing is scientifically possible, does not mean that it should be allowed. The experiments at Auschwitz are a case in point.

Please don't tell me that the embryos will never be allowed to develop beyond 14 days. It makes no difference: if life begins at conception (as the Church teaches) then mucking around with cybrids, hybrids or simple human embryonic tissue is wrong. In fact, it's murder. There is also the "scientific" element to consider: someone will want to let an embryo develop, just to see what happens. And sooner or later, it will happen.

Another argument: the scientists will have to prove that the research is absolutely necessary. Yes, well, scientists are good at that. The fact that adult stem cell research has proved to be so much more useful therapeutically has been neatly side-stepped by scientist and politician alike.

And as for the so-called "saviour siblings" - well, at the moment it's all to do with donating bone marrow and umbilical cord stem cells. But why stop there? The second child could be used as a constant source of cells, right the way throughout their life. Or at least until the child reaches the age of consent... and then that might put a spanner in the works, especially when they go through that uncooperative, bolshy teenager phase... And the next step? I mean, your sick child needs a kidney? Hey, have another baby for spare parts... 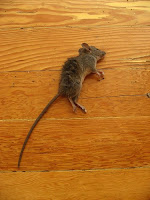 I'm still in the process of tidying up... but I need to take plenty of breaks for stuff like, ummm... blogging... and eating... and teaching. I'd get so much more done if I didn't have to go to work (not!)

Anyway, I finally moved my old bookcase from one part of the living room to another, to make way for one of the new bookcases. Under it, I found a rather dead (and slightly squashed) mouse.

It could have been worse... Sylvester went through a phase of bringing me breakfast-mouse-in-bed.

On a related note, I think I might be running out of bookcases. I have no idea where all the books are coming from. I'm sure that they didn't take up that many armchairs!
Posted by Mulier Fortis on 19.5.08 6 comments:

I'm seriously beginning to wonder whether there ought to be a gagging order on the Bishops of England & Wales. Either that, or they should refuse to give interviews, instead submitting written statements which have been given both an imprimator and nihil obstat from someone in the Vatican... preferably the Holy Father...

What is the ONE major argument against embryo experimentation (and abortion, come to that) ?

That's right. The embryo is a human person, with all the God-given dignity that entails... including the right to life. The embryo is not an "object" which can be disposed of, used for spare parts, or used for experiments.

I'm sure Archbishop Vincent Nichols probably didn't mean to say what he did. I'm being charitable here. Unfortunately, get any Bishop (or Archbishop... or even a Cardinal) in front of a microphone, and he seems to open his mouth, simultaneously to change feet and also to drop enough bricks to build a Cathedral.

John Smeaton quotes the Archbishop of Birmingham as saying, "…What we’ve been trying to say all along is ‘What is the value that we give to human life in its first beginnings?’ Now clearly it’s not the same as we would give to another adult sitting next to me…"

One of those classic Homer Simpson "D'oh!" moments... only far less funny.

And this chap is favourite for Cardinal of Westminster?