Well, at the risk of inviting further disaster, I am delighted to say that my malfunctioning computer has been sorted out. Somehow or other, the registry had been completely corrupted. This necessitated wiping the whole shebang off and reinstalling Windows.

It took me a surprising amount of time to sort out the spaghetti at the back of the computer - what with keyboard, mouse, printer, monitor, speakers, webcam, external hard drive, internet connection and, last but not least, various power cables (yes, they are important... I actually spent three minutes wondering why my computer wouldn't work after I'd connected everything, only to realise that I'd hooked the power cable up out of the way and forgotten to reconnect it! I felt particularly blonde at that point...) I suspect it wouldn't have taken quite so long if the spaghetti hadn't been in such a tangle in the first place!

All fine and dandy, only I now have to reinstall all the programs I had on the computer. The data was saved, as far as I can see, but not the actual programs.

Looking at the blank slate of a computer filled me with a mixture of excitement (oooooh... it's like having a new computer... and I can load the programs I use most, and ditch the old, obsolete ones!) and dread (oh Lord... I have to find the CDs and activation codes, and actually spend time uploading the whole lot... it'll take forever!)

I've made a start... Chrome was the one thing the computer weenies put up for me (they were of the opinion that it's streets ahead of anything else!) and I have been trying to trace favourite links. It will take me quite some time, but blogging will be back on track shortly...
Posted by Mulier Fortis on 12.2.11 3 comments:

Having just gotten my blogging inspiration back, I was all fired up and raring to go. Unfortunately, my computer decided that it had had enough, and promptly conked out. Posting from a mobile phone is much more fiddly and much less fun, unless one has sorted the posts out beforehand! Hopefully my computer will be fixed soon...
Posted by Mulier Fortis on 11.2.11 No comments:

The Catholic Herald reported that more than 140 Catholic theologians from universities in Austria, Switzerland and Germany have called for the Church to ordain women, end priestly celibacy and let lay people help select bishops, along with a few other changes, like allowing remarried divorcees to receive the Sacraments.

They said that enacting the reforms would attract people back to the Church.

Yeah, right. Because that really worked in the Church of England, didn't it?
Posted by Mulier Fortis on 7.2.11 9 comments:

It seems that Deo volente's hankering for a bit of the St. Ninian tartan to be shown, as well as a smidgeon of aubergine... 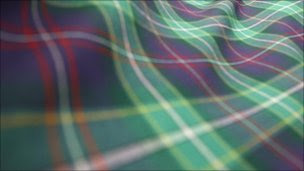 Mass For The Feast Of St. Agatha...

Fr. Tim gave an excellent sermon at this month's Saturday Missa Cantata - which just happened to be the feast of St. Agatha. I was in the mood for a photo or two, and I don't often get the chance to snap the red vestments... 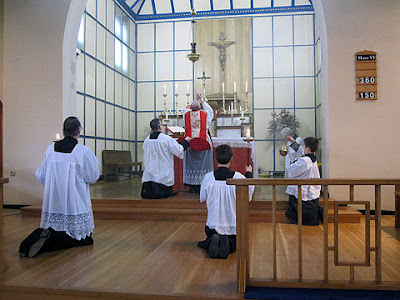 Maybe His Hermeneuticalness was reflecting on St. Agatha's role as patron of bellringers, but he swung the thurible rather enthusiastically during the Offertory, and the MC apparently failed to move the altar out of the way (it being a time-honoured tradition that all errors are the fault of the MC) so the bottom of the thurible came off with an appropriately ringing clang!

I managed to persuade the schola to pose for a photograph afterwards, along with our Organist Emeritus... 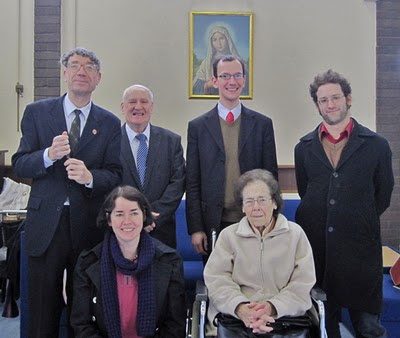 Yes, I Have Hopped On The Bandwagon... 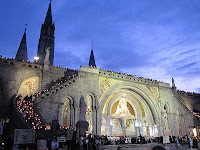 Yes, ok, I shall admit it... I have been persuaded to give my blog a bit of a facelift. In this I am following the good example set by Fathers Finigan, Boyle and Blake (though, to be fair, I think Fr. Ray changed his blog a while back!) I haven't changed the blog since its creation in 2006, so it really was time for an overhaul, if only to improve loading speeds on mobile phones and whatnots...

Looking at what the good Fathers have done, I suspect that I have chosen the better part (well, the better template anyway!) - I hate having to read light text on a dark screen. My background photo, for anyone who is interested, is shown above, and is one I took at the Marian Procession at Lourdes last year. I think that the blue sky maintains some continuity with my previous colour scheme as well, so the changes won't be quite so much of a shock...

Consider yourselves lucky... Deo volente (who has also had a blog makeover) was trying to provoke me into aubergine or Papal Tartan!

UPDATE: Fr. Brown has done it too... That's the problem with reading blogs via Google Reader - you miss this sort of thing...
Posted by Mulier Fortis on 6.2.11 12 comments: