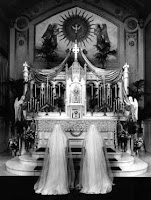 Posting will be suspended temporarily. I've been "advised" to give up my biggest distractions this week as I prepare to renew my vows. A sort of mini-retreat. Unfortunately, I'm not allowed to give up teaching, marking, or report-writing...

The ceremony is 12:30pm next Saturday (8th December) at Our Lady of the Rosary, Blackfen. If any of you are around, you'd be very welcome.


I can feel the blogging withdrawal symptoms setting in...
Posted by Mulier Fortis on 1.12.07 12 comments:

The Naming Of Cats Is A Difficult Matter... 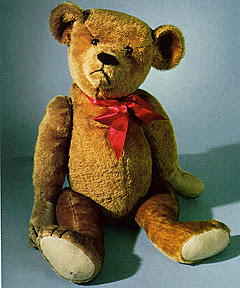 ...but not, apparently, as difficult as the naming of teddy bears in Sudan.

Gillian Gibbons was found guilty today of insulting religion, after allowing her class to name their teddy bear "Muhammad."

I've got a very critical streak in my nature. I also like to call a spade a shovel, and say it like I see it... which means that I can be somewhat lacking in tact. I have also been a little scathing towards one or two of our Bishops...

Being scathing towards the episcopate has an honourable history: St. Teresa of Avila and St. Catherine of Siena didn't exactly mince their words when they felt that their Lordships were lacking in backbone... but, alas, I am no saint, and perhaps I should moderate my tone... just a tad. 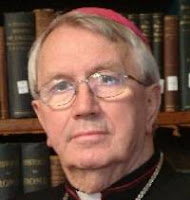 Because of my tendency to be critical, I was delighted to hear about the latest initiative from Lancashire. Bishop Patrick O'Donoghue has drawn up a plan to ensure that children at Catholic schools learn about Catholicism. He's drawn up a 68-page booklet to help headteachers in the diocese's schools and colleges. The document is called "Fit for Mission? Schools: See With His Eyes, Love With His Heart, Share In His Virtues." I was going to link to it, but the Diocesan Website doesn't seem to be working...

Initially, I was a little sceptical. Another booklet. A long one. With a long title. I felt a sense of déjà vu stealing over me. Been there. Read the books. Nothing happened.

However, the Diocesan Director of Education, Fr. Luiz Ruscillo, persuaded me that this was not just more of the same old stuff. He was very enthusiastic, and told me that, while the emphasis was on spirituality rather than academic targets, that spirituality was going to be firmly based on the Truths of the Catholic Faith. All Religious Education in Catholic Schools would be taught around the four pillars outlined in the Catechism: The Profession of Faith, Sacraments, The Moral Life and Prayer. The role of Foundation Governors was going to be more carefully defined. Headteachers and teachers would be expected to support the teachings of the Church. Whole-school Masses would be celebrated, at least two per term. Sex Education would be rooted entirely in Church teaching. Outside Agencies would not be able to promote any views contrary to Catholic doctrine. And there would be no truck with the Government's agenda of promoting homosexuality as an acceptable lifestyle choice...

This is the best bit of news about Catholic Education that I've heard in a long time, and Bishop O'Donoghue is to be congratulated on taking this on. 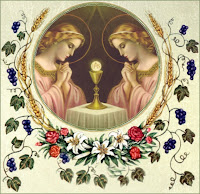 I've noticed that Fr. Tim Finigan (and then Holy Office at Gravissimum Educationis) have put up posts on the way to receive Communion.

When, fifteen years ago, I first returned to the Church, I didn't actually have a choice. I was on crutches, and if I'd let go in order to take Communion in the hand, I'd have fallen over. However, the Parish Priest made it clear that this was "second best" and that adults should take Communion for themselves, in their own hands. So, once I got rid of the crutches, I eagerly started to receive Commuinion in the hand. I even became a Euphemistic Monster... in my defense, I will just say that I was keen to bring Communion to sick and housebound people (which was how I got roped in), but somehow or other we never got to that bit... 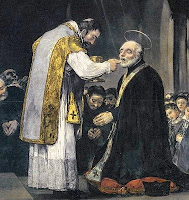 I found myself distributing the Host at Mass on several occasions, but became more and more uncomfortable as a layperson "handling" the Blessed Sacrament. So, once it became clear that Communion to the Sick and Housebound just wasn't going to happen, I stopped.

However, I still received Communion in the hand. I moved, and changed parishes. I started to attend Exposition and Benediction regularly. Gradually I began to become more aware of the Real Presence. I became acutely aware that my fingers, after I had lifted the Host to my mouth, felt grainy and gritty, as if there were minute particles left behind... so I started to lick my fingers after receiving Communion. But there was still the problem of a grainy feeling on the palm of my hand... 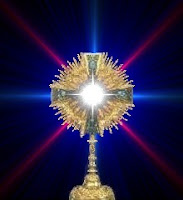 ...and then Fr. Tim (for he was my Parish Priest by this time) pointed out that Communion on the tongue had never been abolished...

I started to receive Communion on the tongue again. And it just felt so right. It seems far more reverent - and it's nothing to do with my being less "worthy" than the priest to touch the Blessed Sacrament... it's just that his hands have been consecrated, and mine have not.

The finer theological points can be found elsewhere. I'm aware that this post merely reflects my own gut reaction. But I'd be interested to hear if other people have tried both methods, and which one they are now most comfortable with. Answers in the combox...
Posted by Mulier Fortis on 28.11.07 9 comments:

Not quite sure what to make of this... it ranks pretty highly on the "yuck factor" scale... until you consider that it might be thought of as a relic...

Fr. Garnet was implicated in the Gunpowder Plot. According to the entry in the Catholic Encyclopaedia, he confessed to some knowledge of the plot, which seems to have put the kybosh on him being declared a martyr. His execution was so closely guarded that no relics were obtained, other than some bloodstained straw (the congealed blood apparently took on the likeness of Fr. Garnet's face.)

However, a 17th Century book gives a Protestant account of the plot and Garnet's involvement. The book was published by the king's printer, Robert Baker, just months after Garnet's hanging and is titled "A True and Perfect Relation of the Whole Proceedings Against the Late Most Barbarous Traitors Garnet, a Jesuit, and His Confederates." The book is bound in skin, possibly Fr. Garnet's own... and some people believe that an image of Fr. Garnet's face can be seen on the cover... 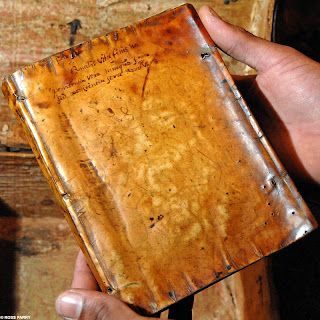 Twitch of the mantilla to Roman Miscellany.
Posted by Mulier Fortis on 28.11.07 2 comments: 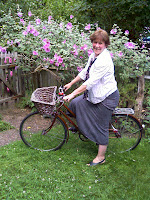 It's been a long day, so this will be a short post... I've just returned home after visiting Joanna for an emergency blogging tutorial. This had the advantage of combining some of my favourite activities into one evening: driving (you say "global warming" like it's a bad thing!), meeting friends (I don't do much of that in term time), teaching (I adore being able to show people how to do stuff), eating (Joanna cooks a mean lasagne, and I didn't even have to wash up), drinking tea, blogging and enjoying chocolate cake of various descriptions.

The evening was very enjoyable. It did take on a slightly surreal twist: a MORI-poll canvasser knocked at the door while we were drinking tea (waiting for a video to upload.) I am very suspicious of such polls. I know enough about Psychology to understand that the questions can be phrased in such a way as to produce exactly the result you want. I rarely give the canvassers the time of day...

Joanna was far more friendly. She also knows the question-twisting proclivities of such organisations, but she's a kindly soul, and so invited the chap in. He seemed extremely confused by his welcome: I suspect that the majority of people react with the same suspicion I do, and he was slightly caught off-guard. He refused her offer of tea, coffee or cake, and when Joanna said, rather kindly, "I suppose not, you'd be drinking huge amounts of tea all day!" he seemed almost embarassed to have to admit that this wasn't the case... but was too polite to say that most people sent him away with a flea in his ear.

It was extremely entertaining: Joanna wanted to give answers that weren't "on the answer card" and the poor man kept scrolling through his list of tick boxes looking for somewhere to record her responses. Finally, Joanna presented the canvasser with a couple of cards of the Holy Father, and he wandered off, looking slightly shell-shocked.

I wonder what she does to Jehovah's Witnesses?
Posted by Mulier Fortis on 27.11.07 6 comments: 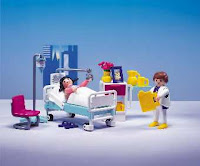 During a visit to the local psychiatric hospital, a visitor asked the Director how they determined whether or not a patient should be institutionalized.

"Well," said the Director, "We fill up a bathtub, then we offer a teaspoon, a teacup and a bucket to the patient and ask him or her to empty the bathtub."

"Oh, I understand," said the visitor. "A normal person would use the bucket because it's bigger than the spoon or the teacup."

I've been a busy little bee, and I'm fresh out of inspiration... so I thought I'd highlight a few little things...

Hilary has been fighting to retain her bank details and still get broadband. It would appear that she has done it, but I'm not entirely sure how. Still, in view of the government fiasco with child benefit data files, her attitude might be considered prescient.

Leutgeb over at Bara Brith has succeeded in making me feel positively slothful: she has already bought and addressed all her Christmas cards (and they'll be proper Christmassy ones too!) despite being a busy music teacher in this most busy of musical school seasons (think of all those carol concerts.) I haven't even bought my Christmas cards yet, though I suspect that I have loads that I never got around to writing last year, so if I can just locate them...

Karen from San Diego has been musing on the difference between a liturgist and a terrorist, and has very decided opinions on penance services. I have to say that I agree wholeheartedly. She has also been making her Christmas wish list clear to Mr. Claus. Mind you, that particular post might just get her struck off the "nice" list.

Both Fr. Finigan and Fr. Blake have been doing a fair amount of Vatican-watching. The new Master of Ceremonies seems to have come up trumps in the vestments department. Fr. Blake has also been casting his eye over various religious communities and their vocations (perhaps in preparation for when he is installed in Westminster!)