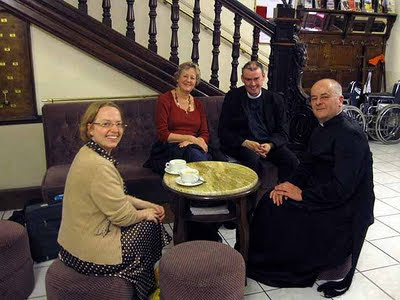 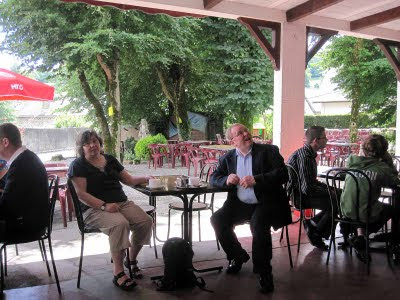 I shall post a selection of pictures over the next few days.
Posted by Mulier Fortis on 4.6.11 No comments:

I arrived home a short while ago. Now, having greeted (and, more importantly, fed) Furretti and Miaowrini, and having unpacked the suitcase, I am just checking a few blogs before crawling, exhausted, into bed.

But I just want to have a little smirk...

I made disparaging remarks in a previous post that cast aspersions on the apparently "non-bio" biometric passport I had to pay an exorbitant amount for last Saturday.

I have completely changed my views.

I arrived at Passport Control at Heathrow Terminal Five this evening, feeling rather tired and irritable, and observed the hordes queuing. I then spotted a small sign which suggested that anyone with a certain chip-type symbol on the front of their passport could go through the automatic scanner.

There wasn't a queue for this scanner.

I checked my passport. It had the chip-type symbol on the front. I gleefully marched to the completely queue-less empty booth, stood on the yellow feet marked on the floor, pushed my passport through a slot and stared at the camera. That camera was a lot more friendly than the official who had originally checked my ear-less photo. The message came up that I passed muster, and I was through.

I'm afraid that I couldn't resist waving at some of my fellow pilgrims who were still queuing...
Posted by Mulier Fortis on 4.6.11 3 comments:

Our Last Morning In Lourdes... 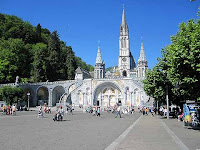 All good things must come to an end...

We finish with Mass in the St. Gabriel Chapel once again, this time at 10:30am, so we all have time to pack our bags. Our coach is due to leave the hotel at around 1:30pm so there will be a little time for last-minute rosary purchases...

All being well, we should be back in Blackfen by about 9pm.

I wonder if the kitties have brought me any presents...
Posted by Mulier Fortis on 3.6.11 2 comments:

Today will be another fairly gentle day, although there's a fair bit of walking involved. 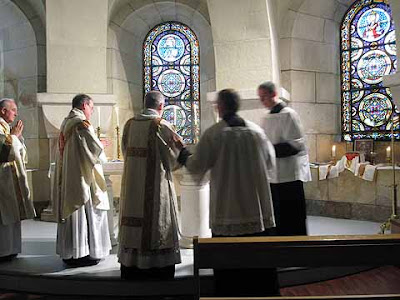 We'll start off with Mass in the Crypt of the Lourdes parish church. It's another Missa Cantata - well, today is the Feast of the Ascension in the EF calendar (and shortly to be reinstated in the OF calendar if rumours I hear are true!) and the acoustics in the Crypt are spine-tinglingly good, so it seems a shame not to sing a bit...

In the afternoon we'll join the Blessed Sacrament procession, which starts at 5pm, and then finish up with the torchlight procession at 9pm.
Posted by Mulier Fortis on 2.6.11 No comments: 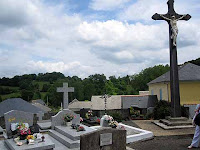 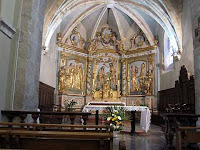 Once again, everything finishes off with the torchlight procession.
Posted by Mulier Fortis on 1.6.11 No comments: 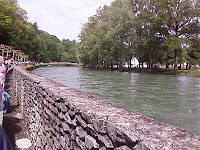 It might be a little on the cold side. The baths at Lourdes are not for the faint-hearted, after all!

The first morning will be deliciously relaxed - the baths are first on the agenda, but anyone with access to a child can go straight in, so no queuing. The men don't seem to have to queue for long either - I think it's because we women have lots of fiddly clothing. The towel is trickier to apply as well... and it fair takes one's breath away when they put it on. There's rather more of oneself in contact with the wet towel... the men have it much easier.

All part of the penance.

I have to admit that, when the helpers instruct me to say a prayer as I walk through the water, I rarely get further than "Oh God... it's so cold! Get me out!" Only mentally. It's impossible to speak coherently through chattering teeth. 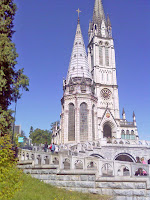 Nevertheless, I wouldn't miss the experience. It wouldn't be Lourdes without it.

At 3pm our group is booked on a guided tour of the places in the town Lourdes associated with St. Bernadette - the Cachot, the parish church, and so on. Mass (in the Extraordinary Form) will be at 6pm in the St. Gabriel Chapel (to the left of the entrance to the Crypt of the Immaculate Conception Basilica.)

Finally, the torchlight procession starts at 9pm. If you're around, keep an eye out for the parish flag, and pop over to say hello!
Posted by Mulier Fortis on 31.5.11 No comments:

And We're Off To Lourdes... 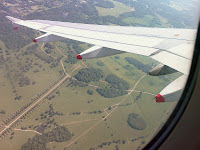 Unless the Icelandic volcanoes get frisky again, by the time this post goes up, I shall be somewhere over France. Of course, things could go horribly wrong, in which case I'm still at Heathrow...

I shall be positive. I'm in the air over France...
There are 27 of us in the group, 18 adults, and the youngest pilgrim is only 4 months old. That should keep me on my toes this year. Our flight doesn't get in to Toulouse until about 5pm local time, and then it's another 2 hours or so on the coach. By the time we arrive, it'll be time for dinner, and then a quick dash down to the torchlight procession, or what's left of it...
Posted by Mulier Fortis on 30.5.11 1 comment: 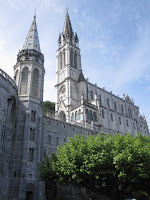 I might just have managed to get myself sorted out in time for a good night's sleep. Oh wait... I might oversleep...I guess I'm in for more nightmares then!

I'm really looking forward to the pilgrimage, but haven't actually done many posts in advance, so posting may be a bit sparse while I'm away...

Oh well, never mind. In any case, I will pray for all my blog readers at the Grotto.
Posted by Mulier Fortis on 29.5.11 No comments: