After months of fevered speculation, during which time just about every one of the Bishops of England & Wales was tipped for the post, the successor to Cardinal Cormac Murphy-O'Connor has finally been announced.
During a press conference at Westminster Cathedral today, the Archbishop of Birmingham, the Most Reverend Vincent Nichols has been named as the new Archbishop of Westminster.
The news actually leaked out last night, just as I was getting ready for bed, and then Damian Thompson said it had been confirmed, but, after all the rumours, counter-rumours and missed announcements, I was wary of making a fool of myself... I figured that I might as well wait for the Vatican Bollettino... or the Westminster press conference...
Reading between the lines of all the rumours which have been flying around, I think that our Holy Father has possibly had his fingers in this particular pie. If he has, it means that he has taken note of the troubles which have assailed us in England & Wales, and, with fatherly concern, has thought carefully about the kind of man we need to lead the Church forward... and for this we can be truly grateful.
You can find out more about Archbishop Nichols HERE.
Posted by Mulier Fortis on 3.4.09 3 comments:

I am so tired... and it's not just me: many of my colleagues look exactly the way I feel. Strangely, this term has been shorter than the Autumn one, but it has been much more draining. I guess two bouts of 'flu really take it out of you!

However, the end is nigh... term ends tomorrow, and I get two lovely weeks off. This will be the first time in ages that I've had all of Holy Week off: the holidays have started (for the most part) on Good Friday, which has meant that I've needed to take a day's unpaid leave on Maundy Thursday in order to make it to the Chrism Mass at St. George's Cathedral.
Posted by Mulier Fortis on 2.4.09 No comments:

In time-honoured fashion, and with the minimum of fuss, a couple of the students in my Tutor Group demonstrated that I am not at my most alert at 8 am.
"Oh, Miss... " one of them exclaimed on seeing me head into the building from my car, "Be careful, your shoelace has come undone!"
I really should have twigged that it was 8 am on April 1st...
My only consolation, as I continued to make my way inside the building, was hearing the same student exclaim: "Joe! Your flies are undone... Hah! April Fool!"
Posted by Mulier Fortis on 1.4.09 4 comments:

Glad to see that standards haven't slipped, despite severe provocation, since I took the test last year...

Mantilla-twitch to His Hermeneuticalness for reminding me of it!
Posted by Mulier Fortis on 30.3.09 No comments:

After an exhaustive review of the research literature, here's the final word on nutrition and health:

CONCLUSION:
Eat and drink what you like. Speaking English is apparently what kills you.
Posted by Mulier Fortis on 30.3.09 10 comments: 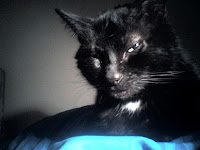 I'm a little worried about Sylvester... he's been incredibly "needy" of late, which is most unlike him. Normally, he's happy to check that I'm around, demand food (frequently) and then find a nice, comfortable spot in which to settle.
At the moment, he's perched on a chair behind me, looking at the computer screen. When I get up, he'll follow me, walking just close enough to make me worry about stepping on him... (well, ok, I'll be honest... tripping over him!) And later, when I go to bed, he'll come and sleep next to my pillow, after having head-butted me a few times. That's definitely not his normal behaviour. Generally, he prefers the middle of the bed... and as much of it as he can commandeer!
Watch this space...
Posted by Mulier Fortis on 29.3.09 6 comments: