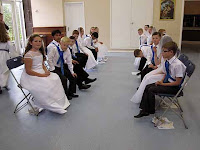 I've been busy with my camera this afternoon, taking photos at the last of our First Holy Communion Masses.
The children were ever so sweet.
I have loaded all of the photos onto Flickr, so they are freely available for downloading. Alternatively, you can just look at them as a slideshow.
Posted by Mulier Fortis on 15.5.10 No comments:

This week in Linky Love, I would like to draw your attention to four different blogs by one author, one grateful heart.
One grateful heart is a Catholic wife, mother and grandmother in the United States. Her excellent blogs are:
Grateful for Purgatory - which takes note of St. Pio's injunction to pray unceasingly, as we need to empty Purgatory.
Eucharistic Adoration for Priests - encouraging the Faithful to pray for priests, especially during this Year of the Priest, before Our Lord in the Blessed Sacrament.
Grateful for Life - an excellent pro-life blog.
Venite Adoremus Dominum - what I would consider to be the blog proper!
All excellent blogs, and I can heartily recommend a visit.
Posted by Mulier Fortis on 15.5.10 1 comment:

The Good Counsel Network is a group which works tirelessly to help women in crisis pregnancies. Fr. John Boyle highlighted the dire financial straits the group is in:

Today Good Counsel has £50 in the bank, we needed £445 to buy this week's food vouchers. We are supporting fourteen mothers and their children at the moment, whose only support is this small weekly voucher. Please pray the following prayer for the next nine days and if you can help, donate online (click on the sidebar link) or transfer money into our bank account (phone + 44 (0) 20 7723 1740 or email for details). As times are hard, our income has gone down and our expenses have gone up.
Please forward this message to anyone who you think may help. For more information about Good Counsel see our blog.
NOVENA TO ST. RITA
Helper of the hopeless
Holy Patroness of those in need, St. Rita, you were humble, pure and patient. Your pleadings with your divine Spouse are irresistible, so please obtain for me from our risen Jesus the request I make of you, that Good Counsel will raise the funds they need and my own request (mention it.)
Be kind to me for the greater glory of God, and I shall honour you and sing your praises forever.
Glorious St. Rita, you miraculously participated in the sorrowful passion of Our Lord Jesus Christ. Obtain for me now the grace to suffer with resignation the troubles of this life, and protect me in all my needs. Amen.

Our Father, Hail, Mary, Glory be to the Father...

They haven't yet set up a PayPal button, though, hopefully, they will do so very soon. I doubt that they'll mind too much which method of payment you make, but the faster the better!
Please help financially if you can, and by prayer either way!
Posted by Mulier Fortis on 14.5.10 1 comment:

Feast Of The Ascension... 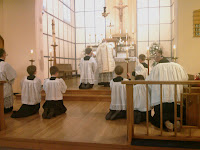 The Bishops of England & Wales, in their valiant efforts to support the implementation of Summorum Pontificum, (*snigger*) moved the obligation attached to the Feast of the Ascension to next Sunday.
They haven't actually moved the Ascension, which is, of course, 40 days after the Resurrection... they just moved the obligation to attend Mass, along with the Mass propers for the Ordinary Form calendar. This frees up those of us with an attachment to the Extraordinary Form to attend Mass on the correct day according to the usus antiquior.
Somehow, I suspect that their Lordships didn't quite anticipate this state of affairs when they freed up an extra Thursday in the calendar...
Be that as it may, I shall be getting my dose of Latin, lace, bells and smells this evening! I may even take a few photos...
Posted by Mulier Fortis on 13.5.10 10 comments:

One Of Life's Imponderables... 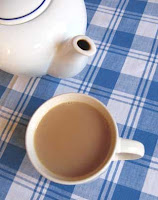 Why is it that, when I have a cup of tea during my 15 minute morning break, I burn my tongue trying to drink it, but, a cup of tea made first thing in the morning goes cold while I'm brushing my teeth?
*sigh*
Posted by Mulier Fortis on 13.5.10 3 comments:

...so I thought a cat picture was in order. Enjoy!! The End Is Just The Beginning...

After what has been the most interesting UK election in decades, (ok, interesting for me... the others have all been predictable, boring and over in 24 hours) the end has been declared. Gordon Brown has resigned (and not the grudging "I'll step down in September to allow the Labour Party to make a pact with the LibDems" statement of yesterday) and David Cameron has gone to the Palace.

So now we have a new Prime Minister. David Cameron takes over immediately, which is in stark contrast to the way things happen across the pond.
Personally, I distrust politicians as a group. The parties will promise anything in order to get your vote, and then do whatever is politically expedient. The old joke goes something like this:
How do you know when a politician is lying?
Simple.
If he scratches his nose, he's telling the truth.
If he rubs his chin, he's telling the truth.
If he pulls at his earlobe, he's telling the truth.
But if he opens his mouth...
The incoming Conservative government is unlikely to be much better than the outgoing Labour one. If the rumours are true (see at 21:13), in order to make a deal with the LibDems, Cameron has already bargained away tax breaks for married couples - which was one of the few pro-family policies the Conservatives had in their manifesto.
Wait and see...
Posted by Mulier Fortis on 11.5.10 5 comments:

Gabriella's Blog demonstrates her love of Archbishop Fulton Sheen and G.K. Chesterton, as well as allowing the linguists among you to brush up on your Italian. The likes of me has to use the "translate" button she has so thoughtfully added to the top of her sidebar...

Chronicles from the Front - this blog has two authors, Lazy Disciple and Humbly Presumptious... and occasionally, the two actually seem to engage with each other on the blog, which gives it the feel of an exchange of letters.

Argent by the Tiber has a very amusing (and pertinent) post on the new Mass translations - it seems that Marty Haugen et al. have tried to fit the new words to the old "tunes": I particularly liked the references to the "Massive Cremation."
Posted by Mulier Fortis on 11.5.10 No comments: 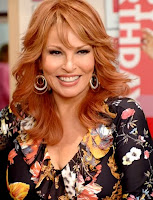 ...and no, I'm not referring to the dissident CINO* British weekly!

The actress Raquel Welch believes that the Pill is responsible for the breakdown in morals, pretty much echoing what the Catholic Church has been teaching since Paul VI. I'd have said "teaching from the year dot" - as the Church doesn't change her teaching - but, of course, the Pill hasn't been around that long!

However, what I really want to know is what face cream she uses. The woman is nearly 70. She has, I understand, had plastic surgery, but then again, so did Michael Jackson, and he didn't look half as good...

Twitch of the mantilla to John Smeaton.