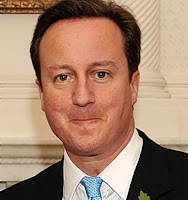 I do think that, whatever the outcome on Tuesday with regard to the redefinition of marriage, Cameron's career has basically been ended. He has been caught out, and the British electorate is a rather unforgiving beast. Politicians are almost expected to lie and cheat, but being caught is considered unforgivable.

Just before the last General Election, David Cameron stated that he had no plans to redefine marriage. He said it in an interview on Sky TV. The Coalition for Marriage has further details.

Mr. Cameron's word, far from being his bond, isn't worth the paper it is printed on. Just as Bishop Devine said, people will not trust him in the future.

Quite frankly, in my humble opinion, he's toast.

Twitch of the mantilla to Fr. Finigan.
Posted by Mulier Fortis on 1.2.13 5 comments:

One of the things I love about the senior servers at Blackfen is their willingness to coach the younger ones. There is none of this "Well, for the first five years you'll be torchbearer, and then, maybe, we'll consider working you up to senior torchbearer!" The Senior MC likes to keep everyone on their toes, and so all the servers have to learn all of the different jobs. This means that the various roles usually get divvied out according to who shows up earliest in the Sacristy and expresses a preference...

Except for the awesome role of MC...

For the last two weeks, one of the younger servers has been having a little extra instruction after the Mass, and today he got the top spot. That meant that he had to keep an eye on the other servers... and also to tell Father what to do. Seriously daunting stuff for an adult, let alone a 12 year-old...

He did incredibly well. You can see a few more photos on my Flickr set for Septuagesima 2013.