Of your charity, can you spare a prayer for my stepfather, Terry, who passed away at the end of October.

Eternal rest grant unto him, O Lord, and let perpetual light shine upon him, may he rest in peace. Amen.

May his soul, and the souls of all the faithful departed, rest in peace. Amen.
Posted by Mulier Fortis on 3.12.17 2 comments:

Time For A Kitty Update... 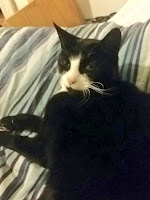 Half term holidays are when teachers get to deal with personal stuff, like housework and laundry. In amongst all the other things that I've been dealing with this week, I had to take Monsignor Miaowrini to the vet for a check-up appointment. Cardinal Furretti had been taken in the last holiday slot...

On the morning of the appointment, I knew I needed to use desperate measures: out came Miaowrini's favourite fresh catfood, and, while she was scoffing the lot, I sneaked over to the cat flap to lock it. Further subterfuge was needed while I assembled the cat carrier, and then I proceeded to entice the cat into the bathroom - she's way too good at scooting out of my reach in a bigger room. Once the bathroom door was firmly closed, I was able to try to get her into the carrier.

I swear cats have the ability to grow six extra pairs of legs when confronted with a cat basket.

Fortunately, I escaped serious injury this time round, and only sustained a few scratches. Once at the vet's, Miaowrini seemed as reluctant to leave the carrier as she had been to go in. I actually had to up-end the carrier while the vet reached up inside it to grab the cat.

After the examination, Miaowrini positively shot back into the box... though it didn't stop her from yowling at the top of her voice for the entire journey home.

She now appears to have forgiven me... despite His Hermeneuticalness pointing out that cats cannot forgive anything, I know (and every other cat owner can bear witness) that cats have an amazing ability to bear a grudge...

Anyway, I discovered that my experience of taking cats to the vet is not an unusual one: Simon (of Simon's Cat fame) appears to have had an identical encounter...


The Church has been a driving force in progress and the development of technology for hundreds of years. Despite this, the Church is often portrayed as being opposed in principle to technology.

I believe he is mistaken on this point.

Certainly I think that we will always have a need for the physical liturgical books, if only because they don't run out of battery! And I understand the Cardinal's point about the books being set aside for the worship of God. But I think that mobile phones (and e-readers) do have a place in helping people to pray "in every place" (1 Tim 2:8).

To begin with, there is the sheer convenience of using one's mobile phone. For many years I carried my copy of the Office around everywhere with me. This had all sorts of knock-on effects, not least the necessity of having a very large handbag. Now, not only can I manage without a handbag, I can have the Office, Missal, Graduale, Bible, catechism and any number of spiritual writings of the Saints available at the touch of a button. Cardinal Sarah himself admitted the convenience of prayer using a mobile phone.

Of course, given the number of social media apps available on mobile phones, there is a need for self-discipline. I suspect that this might have been one of the aspects the Cardinal was thinking of when he declared that praying the Office on mobile phones was not something he would encourage.

But phones are extremely sophisticated now. Not only can notifications be silenced or turned off while in church, but the internet can be disabled completely ("flight mode" is an easily accessible, one-touch control for most phones) or, if the particular resource needs internet access, a do-not-disturb option can generally be set if someone is concerned about their ability to resist following up on the number of Twitter notifications they have received while in church.

Some people can be shocked at the sight of someone else using a mobile phone in church, but as more and more people use their phones for reading, I think this will become less of an issue.

As for phones being put to profane uses, maybe it is more helpful to think of it the other way around: having prayer apps on your phone helps to bring the Sacred into our everyday lives.
Posted by Mulier Fortis on 28.10.17 No comments:

A Plug For The Sisters...

I first came across the Franciscan Sisters of the Immaculate through the excellent Day With Mary events which are held at various parishes. The Day With Mary was an annual treat at Blackfen, and we've been fortunate enough to hold the event in Margate for the past few years. The Sisters are a real inspiration for everyone who encounters them, they exhibit such joyfulness and serenity in their vocation. 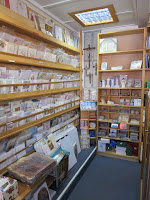 The last time I had an opportunity to chat to a few of the Sisters, I found out that, when not involved in the DWM apostolate, they run the Holy Cross bookshop in Catford. Not only can you find bibles, prayer books and the lives of the saints, but also devotional items such as rosaries, statues and even mantillas.

However, as you might expect, this is no ordinary bookshop. There is a chapel at the back, and every Thursday, from 12noon to 2:30pm, there is Exposition of the Blessed Sacrament and silent adoration. The Rosary, Divine Mercy Chaplet and Divine Praises round things off at 3:10pm - Benediction cannot be given because there isn't a priest available. 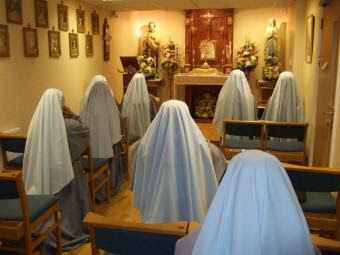 Due to the Sisters' commitments with the DWM, the bookshop is closed on Saturdays (and obviously it's also closed on Sundays, Bank Holidays and Holy Days of Obligation) but, for those of us unable to make a mid-week trip to Catford, there is a new website and mail order service. Also, if there is anything specific that you are looking for, you can email or call, and they will try to help. 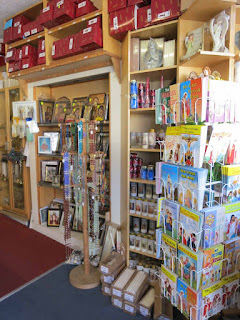 If you do want to pay the Sisters a visit, it is advisable to phone (020 3441 8240) or email first, as they do very occasionally need to close - but this is announced in advance on their answering machine.

With Christmas coming up, you might be thinking about buying cards and little stocking-fillers, and I do encourage you to support the Sisters in the good work that they do. 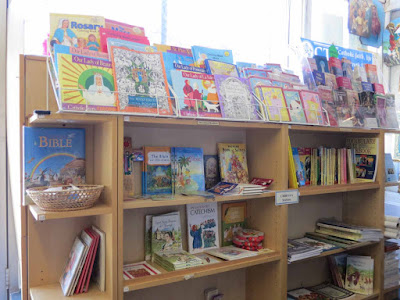 Isn't Time Fun When You're Having Flies...? 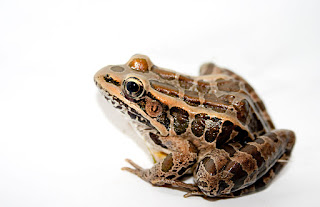 I hadn't intended to stop blogging, I just couldn't think of anything positive to say, given the situation. I thought a short break (albeit an "unofficial", unannounced one) might help to restore some much-needed perspective.

And now I see, to my utter amazement, that my short break has actually lasted ten months, and I'm very nearly ready to post more stuff about Christmas.

I was very moved when I received a message, via His Hermeneuticalness, from one reader who said I should start blogging regularly again. So there is at least one person keeping an eye out for activity on my blog. Somehow I doubt that he was hoping to read any more cat and seagull posts, but we shall see what comes up...
Posted by Mulier Fortis on 20.10.17 6 comments: