For all you Latin Liturgy junkies out there... I provide the opportunity for you to resist temptation, and thereby earn brownie points towards your eternal salvation (I'm kind and thoughtful like that!) For you will surely be tempted to indulge in envious thoughts when you see the following photos...

We are having a monthly Latin Novus Ordo Sunday Mass, and the first one was today. In addition, it was the Baptism of the son (and grandson) of friends of mine, and his parents wanted a full-on Old Rite Baptism, with all the trimmings. I was privileged to sing the Ave Maria at the parents' wedding 18 months ago, so this was an event I wouldn't miss for the world.

Here's the 11-week-old baby in his father's arms just as Mass started (Grandad is watching from the pew behind!) - note the chasuble on the sedilia - Fr Tim wears a cope for the asperges. I didn't manage to get a photo of that... next time! 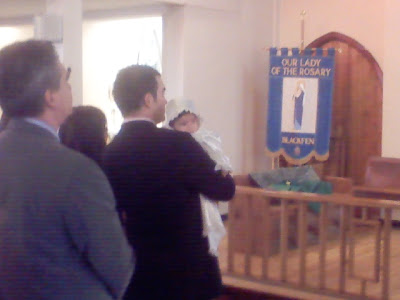 The biretta is very much in evidence... it is doffed at the mention of the Holy Name, which I find very moving - a real witness against blasphemous language. 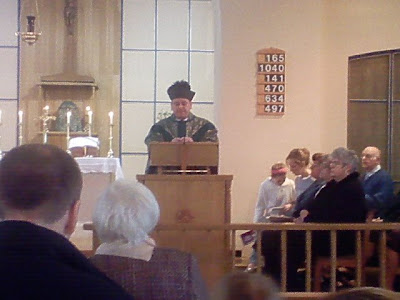 After Mass, quite a lot of people gravitate towards the baby... people like babies, especially cute ones. Once again, I couldn't get many good photos, as most people approached from the aisle (blocking my view!) 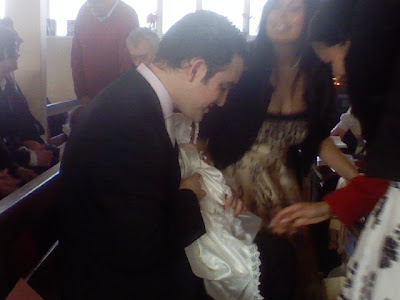 ...so the proud father posed! The christening gown was beautiful - Max's dad was baptised in it too 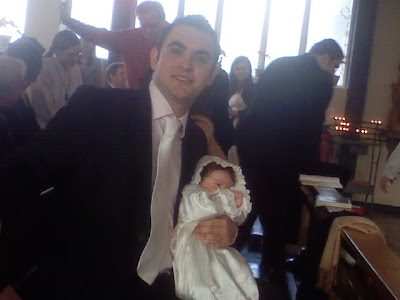 The paschal candle and font were moved onto the sanctuary. The Baptism started when the parents and godparents (with the baby) went to the back of the church for the exorcisms. Little Max howled most gratifyingly at this point. 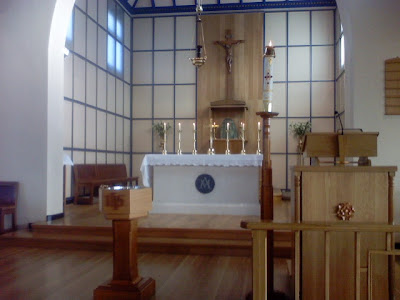 More prayers were said at the front of the church. Note the purple stole: I hadn't realised that Baptisms used to start off with a purple stole and then finish with white (which is why many stoles have purple one side and white on the other!) 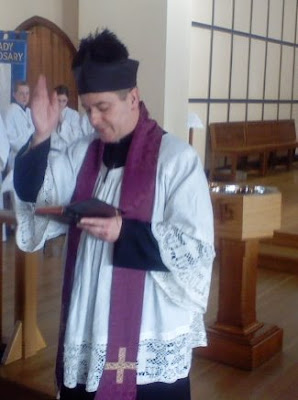 Another thing about the Old Rite: the questions are addressed to the child rather than to the godparents (though obviously only the godparents make intelligible responses!) 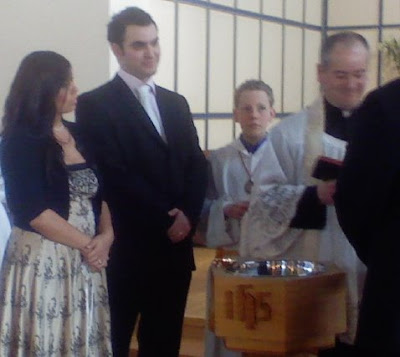 Having cried since the exorcism, Max promptly (and equally gratifyingly) went silent as the water was poured on his head... 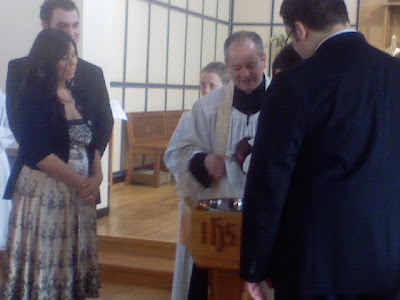 The Baptism ends with a blessing for the mother (something else which has been lost in liturgical reform) - Max's mother is kneeling in front of the Lady Altar, so not the best photo: 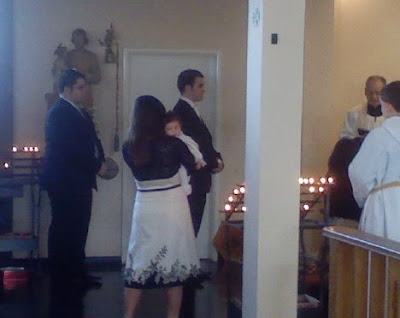 And father and son pose for a final photo: 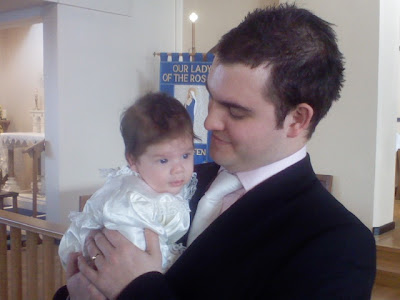 Oh my word.
What a completely gorgeous baby.
(And that Baptism! How utterly cool!)

Wonderful photos, Mac. I wish God's choicest blessings on Max and his parents.

Such a beautiful baby and a beautiful gown. May he bring that garment unstained to the throne of the Lord!

Impressive pom-pom on the biretta. The PP at my parish has a purple pom-pom but it's rather flat (he's a rather old, but sprightly monsignor).

Does Fr Tim put hair mousse in his pom-pom for extra body?

BTW - there's a very good Old Rite baptism in The Godfather. Trouble is it's interspersed with some grizzly murder scenes....

I won't say I'm jealous because last time I'm sure that prompted JP to ask if I needed to change Parish. Having come from an Anglo-Catholic parish, I'm very fond of the old Liturgy, but I can survive if I don't get it...

Paulinus -
There are grizzly murders in 'The Godfather'?!
Good grief, I knew about the horsehead in the bed, but that's taking it too far!

Hehehe... Ma, hope I've given you some ideas for your own baby's impending baptism? Don't forget the salt for the exorcisms...

...and don't forget to let us know when the baptism is going to be...

Paulinus, I'll have to get back to you on the pompom! LOL

We were all blessed with a most Holy Baptism and the sun shone all day allowing the children to run riot in the garden. Max really is a beautiful Catholic Boy and as an added bonus he sleeps all night.

Nice photos mac, we were running around so much with the preparations that we havent had a chance to stop and think back to the wonderful ceremony, its great to see a step by step account online already, thanks and god bless, the parents (ps its weird when you refer to us as parents it hasnt sunk in yet and i keep thinking your refering to my mum and dad)

Beautiful photos! As a priest, I hope to wear the biretta. I really like it.

Are these photos from a special order of priests dedicated to the Old Rite like the FSSP? Or is this a priest able to offer the Old Rite through his bishop's permission?

Moneybags, Fr Tim is not from any order - he's a diocesan priest. The Mass was Novus Ordo... just "done" properly, in Latin, and ad orientem...

...I can't see anyone arguing with him though... he is, after all, Professor of Sacramental Theology at the diocesan Seminary, Wonersh (in his spare time!)

Check him out at the Hermeneutic of Continuity if you haven't done so already!!

Thanks for a great post. I myself am finding it interesting to compare the different rites and it really helps to be able to see it "in action". You are very blessed in Fr. Tim Finigan. I would be interested in whether the baptism was all in Latin? Lucky little Max. Properly exorcised and all!

No, Matt, it was a mix of Latin and English. Fr Tim said that there had always been provision for the Baptism to have a lot in the vernacular.

Yes, we are indeed blessed in our PP. I used to worry that he'd be whisked off to become Bishop somewhere, but I suspect he might be a little too outspoken for their Lordships' tastes!!
;-)

Mac I would hate to lose Fr Tim as PP, BUT Catholic England would be a better place were Fr Tim made a Bishop!

You are right though, most of the current Lordship's would wince and run for the nearest retreat (golf club) once 'Bishop Tim' goes into action.

Hey, why stop at Bishop, I would nominate him for Cardinal right now! This Country desperately needs Catholic backbone to push back the secular/pagan molten magma that just seems to rumble along taking everything in its wake.

But it IS stoppable and even reversible - just needs good Catholic men and women to stand up and be counted - whatever the cost. No cost - no respect! that's why the CofE has failed so dismally, they simply want to be all things to all people - UNLIKE Our Saviour who simply laid it on the line - 'pick up your cross and follow Me'.

Mac - Mulier Fortis is really picking-up nicely. Lot's of varied posts and comments but always True to Mother Church. Thanks and God Bless.

Bishop of the Blogosphere perhaps?

Are those altars girls on the santcuary?!!!

I think the blessing at the end must have been the Churching of Women. In the Old Rite there is no blessing for parents. In fact, the parents are not mentioned because the Rite is focussed solely on the child being baptised.

You may be interested to see my own daughter's baptism and also my wife's churching both in different times and places. I really think these are customs oft neglected in the debate on Tradition; instead reducing the post-conciliar changes down to the Mass. I think Fr. Tim and his parishioners would agree that these are incredibly moving ceremonies, and not to be jettisoned so easily.

Prayers for wonderful little Max! It is good for his parents to know he has been properly exorcised!

Seen it already, Matt... awesome! Almost makes me want to have children...
;-D