As I drove home this evening after Benediction, I noticed a rather long queue at the local petrol station. It was much longer than normal for 9:30pm on a Thursday night, and stretched all the way back to the roundabout, causing quite a bit of disruption to passing traffic.

Obviously people are panicking about fuel shortages if there is a strike by tanker drivers..

This hasn't been helped by Government ministers telling people to keep a full tank and also to store petrol in their garages to help avoid strike disruption.

The effect of such statements on public behaviour is so easy to predict that one can't help but wonder why the Government didn't foresee it. You'd have to be really stupid not to work out that suggesting the possibility of fuel shortages increases the likelihood of panic-buying, wouldn't you?

I'm no fan of the Government but I find it just a little hard to believe that anyone could really be that stupid. Surely at least one civil servant would have made the obvious connection and told someone...

Which then makes you wonder if it wasn't deliberate. Get everyone really riled up, start the panic, see a few petrol stations run out of petrol because of the unusual demand, closed petrol stations fuel (sorry!) the panic and then the general public start screaming at the Government to send in the troops to cross the picket lines. This then undermines the bargaining power of the unions in the future. After all, if it's ok to break this strike, why not the next one?

In Rome, during Lent, it was traditional to visit a different church for each of the days - each church or chapel was a "Station." Plenary indulgences were attached to such visits, I presume under the usual conditions. The St. Andrew's Daily Missal has some information on each of the Stational Churches.

Zephyrinus (the blogger, not the deceased Pope!) has gone one better - he has combined the information from the Missal with other information and photos gleaned from Wikipedia and other sources - each day during Lent he has put up a post on the stational church associated with that day. 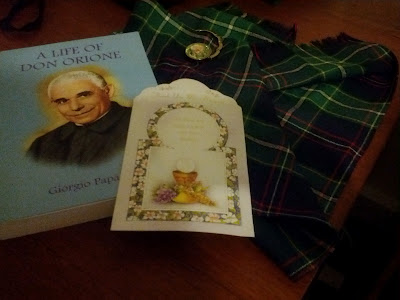 I've been meaning to say thank you to a few people.

First I was sent a book about St. Luigi Orione, the founder of the Sons of Divine Providence and the Little Missionary Sisters of Charity. I'd never heard of him, and I said so during the Day With Mary. Kevin very kindly hastened to correct my ignorance, and I shall read the book over the Easter holidays.

The next present was from Sister Roseann, who knew of my appreciation of the St. Ninian Tartan - the one designed especially for the Holy Father's visit. I had already managed to get a shawl, but shawls don't really suit my rather more than generous proportions... so Sister Roseann presented me with a scarf. The weather has been unseasonably warm ever since, but I shall wear it at the first hint of a cold snap. Probably some time in June... or July... (British weather being what it is...) Mind you, I shall have to prise Monsignor Furretti off it first. She has decided that it's a very nice comfortable tartan...

One of my Confirmation candidates presented me with a lovely little "handbag saver clip" - I only knew that's what it was because someone had helpfully written it inside the box lid. It's a small hook that uses a cantilever effect to balance on a surface so you can hang your handbag under the table or shelf. It is a brilliant piece of engineering, but it took me ages to figure out how it worked. Mind you, His Hermeneuticalness couldn't figure it out either... but then I guess he doesn't have handbags...

I was also given a large box of Maltesers by another candidate, which was very nice. Unfortunately, it being Lent, I deemed it prudent to pass the chocolates on to someone with more willpower (or who hadn't given up chocolate)...

My final thank-you goes to the candidate who presented me with a Mass card. That was a very special gift indeed...
Posted by Mulier Fortis on 28.3.12 No comments: 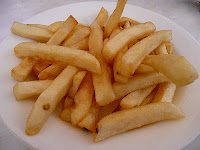 *Ahem!* I am very sorry for the awful pun, but someone was sure to make it sooner or later, and so I thought I'd get it over and done with. His Hermeneuticalness has been visiting the famous Chip Museum in Bruges. Hopefully he didn't eat any of the exhibits...

So it seems that Belgium is famous for beer (Blackfen's Senior MC would probably insist on it being termed Novus ordo Eurofizz), chips and chocolate. I'm very tempted to emigrate...
Posted by Mulier Fortis on 28.3.12 1 comment: