Tomorrow sees the feast of St. Zephyrinus, Pope & Martyr. I would encourage you to celebrate the feast with a visit to his namesake's blog. There you will find a veritable treasure-trove of photos and information about saints, churches and devotions. There's even a post on St. Zephyrinus himself...

Do go along and wish him a happy feast day. Anyone who orders his socks from Gammarelli's is a thoroughly good chap. 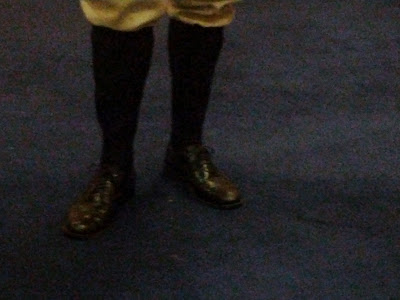 Here at Blackfen, we like to celebrate events the way the Holy Father does - with champagne and chocolate cake. The promulgation of Summorum Pontificum was one such event, and Fr. Tim's blog reaching 3 million hits was another. Today we decided to celebrate Cardinal Cormac Murphy-O'Connor's 80th birthday...

Before anyone panics, the children were waiting for the cake, not the champagne...
Posted by Mulier Fortis on 24.8.12 3 comments:

I have decided to start another meme. This one has a slight twist, but it should be fun to see the results.

It's a photo challenge, so, if you are a blogger, you have to give a link in my com-box so that I can collate the results. If you don't have your own blog, you have to load the photo to Flickr or Twitter or something.

The challenge is to find any Cathedrals which don't sell The Pill (aka The Tablet.)

There aren't any tags as such, because it isn't always clear which dioceses bloggers (or commenters) are in.

Obviously this doesn't really apply to dioceses outside the UK. Photoshopped entries are definitely not allowed...

To start us off, here is Westminster Cathedral, with The Pill very much in evidence, on Wednesday 15 August 2012...

I'm feeling rather aggrieved at the moment. I have had to abandon the Monsignori to the tender care of my next-door neighbour (fortunately, she really likes cats) while I scoot over to Eastbourne in order to look after my parents' two yorkshire terriers and cat.

I don't really dislike dogs. I just prefer dogs to be proper dogs... and not, as a friend described them, a pair of slippers. Yappy slippers. The cat, on the other hand, is really cute.

To add insult to injury, I had to grit my teeth when I noticed Eucharistic Ministers purifying chalices at Mass. Apparently this is a very common liturgical abuse in Arundel & Brighton diocese.

It has highlighted how very, very fortunate I am to be a parishioner in Blackfen!

I do hope that the Monsignori will have forgiven me by the time I get back home on Friday. I might have to invest in some smoked salmon by way of apology...
Posted by Mulier Fortis on 23.8.12 6 comments:

In view of the much-reported outrage over the sentencing of members of a punk rock band who desecrated a church in Russia, I wonder why the mainstream media have failed to protest the arrest, in Pakistan, of an 11 year-old girl with Downs Syndrome for blasphemy.

I haven't followed the Pussy Riot story very closely, but I have noticed one rather important point... the members of the band were sentenced to two years' imprisonment for their publicity stunt/political protest and the mainstream media think this is rather harsh. I believe that the punishment for blasphemy in Pakistan is death... yet that doesn't appear to be harsh enough to attract the attention of the same media.

Twitch of the mantilla to Fr. Tim Finigan.

Putting The Genie Back In The Bottle...?

It has been interesting to read the responses to the excellent FIUV position paper on the restoration of the three-hour Eucharistic fast, summarised on Rorate Caeli.

As pointed out by Joseph Shaw, many people only read other blog posts on the paper (such as the one by Australia Incognita), and then made all sorts of objections to the three-hour fast which had already been dealt with in the original paper.

Quite a few of the comments on Fr. Ray Blake's post seem to suggest that, since the rules have been relaxed, it would be impossible to reimpose them.

For many years, I observed Friday abstinence as a voluntary penance. Nevertheless, I frequently found myself in situations where I was tempted to ignore it; it would be pointed out that "One can always do the abstinence on another day, or do something else instead." Once the Bishops of England & Wales reintroduced Friday abstinence as part of Church law, it actually became much easier to observe the rule. To put it simply, my friends and colleagues accept that, as a Catholic, I do not eat meat on Fridays. In the "real world" it has become acceptable - it's not just a personal idiosyncrasy, it's Church Law.

True, not everyone will observe the rule. However, this should not be an argument for not having the rule at all.  After all, the majority of people are quite happy with the idea that there are observant, devout Jews who keep the Sabbath and Jewish dietary laws very strictly, and there are other Jews who do not. It is also understood that there are devout Muslims who will not drink alcohol and who pray five times a day... and there are Muslims who aren't so devout. It should come as no surprise, therefore, that there will be some Catholics who choose to ignore the laws of the Church on Friday abstinence - especially as plenty of Catholics currently ignore Church teaching on moral matters. This does not mean that one should not have these teachings. As the Holy Father has pointed out, Truth is not subject to a majority vote.

I seriously believe that reintroducing the three-hour fast would have many advantages.

Firstly, it would help people to prepare for the reception of Holy Communion in an active way - one would have to decide that one was going to receive, and to make the effort to avoid food. Three hours isn't an onerous time to go without food, and one can even survive without water for that time - we are constantly producing water through the process of respiration. Since the three hours is counted from the time one actually receives Communion, the time without food would be closer to two hours before Mass. Even in the morning, this isn't a huge difficulty.

Secondly, it would make it easier for those who could not receive Communion. The obvious assumption to make would be that a person had not kept the fast, and so was not going to communicate. At the moment, with practically everyone going to Communion as a matter of course, there is huge pressure on those who are not in a state of grace to go up anyway.

Thirdly, I think it would encourage those of the Faithful who do currently try to do more than the bare minimum to prepare for the reception of Communion. They will no longer have to fear being considered odd for observing a fast, it will just become accepted as what practising Catholics do.

So, is bringing back the old rule attempting to put the genie back into the bottle? I do not think so. But waiting for everyone to agree that it's a good idea isn't going to help anyone.
Posted by Mulier Fortis on 19.8.12 11 comments: