Someone's Been Watching My Cat...

Whoever made this animation really knows cats far too well. After demonstrating how a cat can wake up its owner in the morning, we now get to see a cat trying to get inside the house after a night on the tiles...


Sylvester's a cat who likes his creature comforts... he rarely stays out all night, scooting back in at around 3am. How can I be so sure? Well, if it's been raining, he jumps on my sleeping form and tries to insinuate his cold wet furry body under my chin, miaowing loudly until I get up and dry him off with an old towel. And when I glance, bleary-eyed, at the clock, it's usually around 3am.

Twitch of the mantilla to Hilary for this latest cat-related video!
Posted by Mulier Fortis on 7.3.08 2 comments:

The Cards Have Arrived...

Woohoo! Finally, despite all my misgivings, I have the cards in my sweaty little paws, two weeks before Easter. I must confess to feeling rather pleased with the final result! 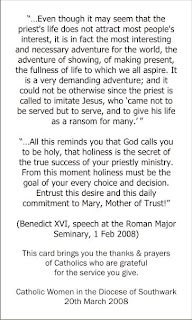 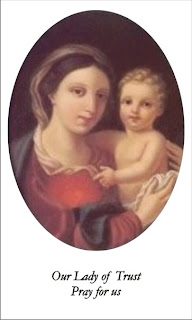 Not A Blonde Joke... (Probably)

...but it made me laugh out loud! Elizabeth sent it as a comment, but it's far too good to leave languishing in the combox...

A 54 year old woman had a heart attack and was taken to the hospital. While on the operating table she had a near death experience. Seeing God she asked 'Is my time up?' God said, 'No, you have another 43 years, 2 months and 8 days to live.'

Upon recovery, the woman decided to stay in the hospital and have a face-lift, liposuction, breast implants and a tummy tuck. She even had someone come in and change her hair colour and brighten her teeth! Since she had so much more time to live, she figured she might as well make the most of it.

After her last operation, she was released from the hospital looking drop-dead gorgeous. When she crossed the street on her way home, she was run over and killed by an ambulance.

Arriving in front of God, she demanded, 'I thought you said I had another 43 years? Why didn't you pull me from out of the path of the ambulance?'

God replied: 'I didn't recognize you.'
Posted by Mulier Fortis on 7.3.08 No comments:

Oh Me Of Little Faith...

I grabbed a spare five minutes at school today to phone the company printing my Chrism Mass Thank-You cards. The woman I spoke to was incredibly vague: the cards had gone to print earlier in the week, but she wasn't sure when they'd be ready, and Royal Mail were a bit unreliable, they couldn't guarantee delivery before the end of next week... but of course, if I wanted to upgrade to courier service, for a small extra fee...?

I got a little cross. Just a little. I explained that no, I didn't want to pay extra for a courier service. I just wanted to know exactly when the cards would be ready. I then had to bring the conversation to an abrupt halt as I had a lesson to go and teach. I think the sales person must have gathered this, as I was in the corridor on my mobile phone by this point... and school corridors are not the quietest of places at the end of break.

I rang again at the end of the day. Things were still pretty manic, as the GCSE and A level module results had arrived, and students who couldn't wait to find out their grades until their next Science lesson were coming in to the office to ask what they'd got. I spoke to the same young woman. She informed me that, on further investigation, the package had been delivered this morning. At 10am. Only, (and this was definitely my fault) I wasn't in to receive it... and I should have gotten the delivery note.

I bit back a rude retort, and patiently explained that I hadn't actually managed to get home from work yet...

At least I should get the cards tomorrow!
Posted by Mulier Fortis on 6.3.08 1 comment: 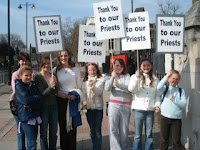 Each year, I promise myself that I will be better organised for the Chrism Mass. And each year, something happens to catch me on the hop. Last year there was a bit of a kerfuffle over the placards for the "Thank You" parade (it doesn't sound quite right to call it a demo!)

This year, I was determined to get a move on. Last year's card was a great success, and I was determined that standards should be maintained. And so I started to hunt for a suitable quote and an equally suitable picture nice and early - in fact, I started to look pretty much at the beginning of February. This search was, I felt, rewarded: I found an absolutely perfect quote from the Holy Father when he addressed seminarians in Rome, and there was even a picture to match...

Unfortunately, Lent this year actually started in the first week of February... and Lent is not as long as it appears!! This means that the nice, cosy feeling I had on getting everything sorted so "early" is rapidly changing to mild twinges of anxiety because I haven't had the cards delivered yet...

I doubt that we can get placards made up in time, so I guess it'll be another DIY job for them (though I won't leave it until the night before!) And I need to get on the phone to see if I can rustle up a few young women to cheer for the priests as they process in for Mass. If you happen to be in the area on Thursday 20th March, 2008, we will be outside St. George's Cathedral from 10:45am - the Mass starts at 11:15am - and you would be most welcome to join us. Put a comment in the combox if you need any more details.

The idea of thanking our priests at the Chrism Mass does seem to be catching on... Joanna Bogle has told me that there is going to be a similar "Thank You" parade at the Chrism Mass at Arundel & Brighton diocese on Tuesday 18th March, and another one at Westminster Cathedral's Chrism Mass on Wednesday 19th March.
Posted by Mulier Fortis on 5.3.08 2 comments:

I've Been A Bit Busy, But While You're Waiting...

I found the following video. Not quite sure about throwing the cat up so it catches the overhead wooden beam, but watching the cat on the cactus was priceless! Enjoy!

According to Jeff, the Curt Jester, Laetare Intolerance is a gastrointestinal disorder brought on by the sight of apparently "pink" vestments. Help is at hand, in the form of "Vestmints" - these help to alleviate queasy sensations at the sight of anything even slightly redolent of Pepto-Bismol.

Confirmation that you really do suffer from Laetare Intolerance is best obtained from a doctor: all he needs to aid the diagnosis is a stole sample. See HERE for dosage instructions and contraindications...
Posted by Mulier Fortis on 2.3.08 2 comments: 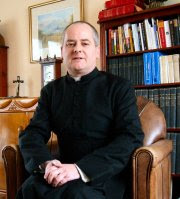 ...I noticed, over on Paddy Power, that Fr. Tim Finigan has entered the field for the Westminster Sweepstakes...

...and this late runner has pipped Cardinal Pell, entering in at 10-1.

Sorry as we in Blackfen would be to lose him, (and recalling a comment a while back on Fr. Z's blog about the appearance of the words "Mene, mene, tekel and parsin" on every episcopal dining-room wall), I think that "Timothy Cardinal Finigan" has a certain ring to it...
Posted by Mulier Fortis on 2.3.08 5 comments:

Nominations for the Catholic Blog Awards have now closed. I was delighted to see that I scraped a nomination... last year I got five votes... maybe this year I can improve on this...

...though I'm not holding my breath as I merited only one mention out of the 50 pages of nominations...

But voting starts on Monday... or possibly on March 4th, which is actually Tuesday (looks as if someone forgot it was a leap year!)
Posted by Mulier Fortis on 2.3.08 1 comment: