Since most people read this blog for the cat posts (judging from the number of people who asked me about the kitties at the Faith Summer Session earlier this week) I thought it was worth posting...

I have no idea how, when or even if I made this gif image of the kitties showing their poor opinion of The Bitter Pill while leaving The Catholic Herald unscathed, but discovered it when I was checking through some old images.
Posted by Mulier Fortis on 3.8.13 No comments:

Somehow or other, I got myself enmeshed in a spat on Twitter, all about blogs and comment threads. 140 characters just wasn't enough for this one, so I have decided to blog about it...

I usually take the stance that it's best to ignore the stupid stuff, and in general this attitude has paid off. I very rarely get abusive comments on the blog, for example, because I just delete them, and do not refer to them. Most people who want to be offensive want to provoke a reaction, so when the comment disappears without trace, it gets boring for them, and they go elsewhere.

I take much the same approach to Twitter: offensive tweets are best ignored - and much better never acknowledged, even to condemn them... Twitter feeds are pretty fast-moving, and if objectionable stuff is ignored, it will usually disappear without trace.

I moderate my blog comments. I do not necessarily agree with the comments I do publish, but if I don't like the tone of a comment, I am quite ruthless in deleting it. There is no discussion, and no appeal. It's my blog, and if someone objects, they are free to start their own blog. I suspect this is why I don't get many comments, but I don't blog in order to get comments...

I read blogs via Feedly. It shows me the blog posts as they are published, and saves me having to check whether or not someone has updated their blog. If I find a post amusing or thought-provoking, I might tweet a link to it, or I might actually put up a link from this blog. It does not mean that I agree with everything that has ever appeared on that blog.

Feedly does not show comments threads on blogs. Occasionally, I might want to comment on the blog, in which case I will visit the particular post and add a comment. This is rare - even more so now that I use my mobile phone for blog-reading when I have some spare time.

I do not consider myself responsible for the content of other blogs, still less for their comments.

Quite frankly, unmoderated comboxes are a magnet for idiots, and there is no shortage of people who wish to write very unpleasant stuff on the internet. If one comments on a thread on an unmoderated blog, then one shouldn't be surprised when the idiots pile in. That doesn't mean that it is right for abusive and vile comments to be published - and generally, when this happens, one can ask for the offensive comments to be removed... but one will have to ask, because "unmoderated" means that the comments aren't being checked beforehand, and not everyone has the time to check and re-check comments on old posts (or even on new ones), especially if the comments go up in the early hours of the morning!

Countercultural Father beat me to it, as usual, and he managed to summarise the whole thing much more effectively than me, so do read his excellent post!
Posted by Mulier Fortis on 3.8.13 2 comments:

In Case You Were Wondering..

One of the reasons why I haven't been blogging lately... 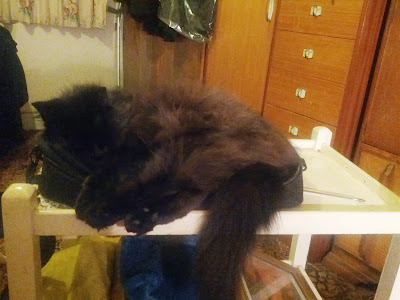 Cardinal Furretti rather likes sleeping on my laptop case, and sometimes I haven't got the heart to turf her off so I can retrieve the laptop...
Posted by Mulier Fortis on 3.8.13 No comments: