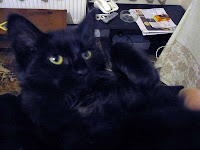 I've been writing a lot of cat-related posts of late, but people have been asking me how Monsignor Furretti is getting along, so here's the latest...

I'm not a fan of allowing animals into church - guide-dogs excepted. However, I always get important things blessed - especially my cars (well, the way I drive...) and important books. I happened to ask if it was possible to get animals blessed. His Hermeneuticalness informed me that there was indeed a blessing for animals in the Rituale... admittedly, it was for flocks and herds, but...

He also told me that St. Martin de Porres had founded a hospital for sick cats and dogs. On the strength of that sort of saintly example, I asked if, on the Feast of St. Martin, Furretti could be blessed.

It nearly didn't happen - the night before, Furretti had a rather upset stomach, and I wasn't sure if a car journey would be a good idea. However, on the Wednesday she seemed a bit better, and so I popped her into the cat carrier and drove to Mass.

I didn't take her into the church, but left her in the car. After Mass, I brought her into the Small Hall, and gave her a saucer of water. Fr. Tim then blessed her - surprisingly, she didn't object to being sprinkled with holy water - but I couldn't take a photo, as I was busy ensuring that she didn't find her way into the vestment cupboards. Fr. Tim did manage to get a photo of her afterwards.

Since then, Monsignor Furretti has been making steady progress.

Sylvester was too big to climb onto small shelves, and he was getting arthritic, so didn't tend to jump onto anything higher than my bed. Anything (other than food) which I didn't want him to get at would be safe left up on a shelf. Now, however, no matter how carefully I put things away on shelves (often behind other, larger things), she manages to climb onto the shelf and hook the objects out. Pens, memory sticks, rosaries, alarm clocks... Yesterday, she sat on a bookshelf and deliberately hooked out three books from the middle of the row and pushed them off the shelf onto the floor.

Strangely, despite the many statues I have on my shelves, I haven't found any of them on the floor... yet.

Furretti also has her appetite back.

Note to self: even though prawn crackers bear no resemblance to prawns, Furretti likes them. Despite the Chinese takeaway packing them in polythene bags, Furretti will open the bag with a single swipe of her claw, and she will then proceed to hook out a cracker and commence chewing... 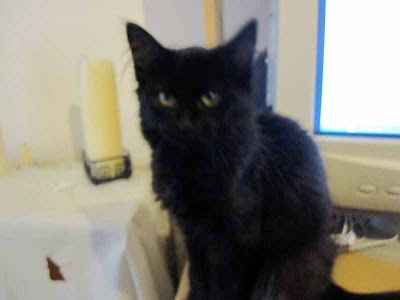 I posted before on the Flash Mob (I think that's the expression) that sang for passengers at Heathrow's Terminal 5 (as a commercial for T-mobile.) It must be quite something to get caught up in an event like this... I never seem to encounter this stuff.

In a similar vein, the inimitable Fr. Z posted a Random Act of Culture performed by the Opera Company of Philadelphia at Macy's Department Store...

Great though it was, I'm afraid that the Hallelujah Chorus has never quite been the same for me ever since I saw this version... 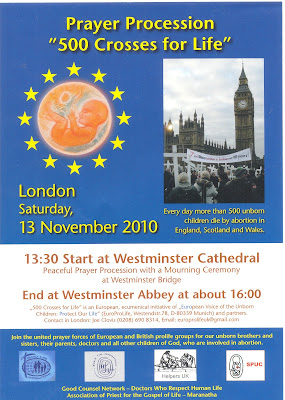 Click on the image for more details, but basically, several pro-life organisations are getting together to hold a procession to mourn all the unborn children killed through abortion. It starts at 1:30pm at Westminster Cathedral, goes to Westminster Bridge and finishes at Westminster Abbey. I assume that means the procession will go round Parliament Square to the Bridge and then back round to the Abbey.

Please support this with your prayers if you can't get there in person...
Posted by Mulier Fortis on 2.11.10 1 comment:

Monsignor Furretti ought, I think, to be appointed to the Congregation for Divine Worship... 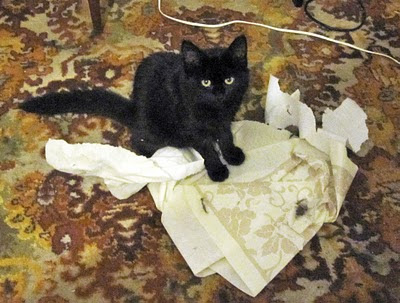 She has already shredded the (paper) tablecloth I had on my altar, and it occurred to me that her talents (and talons) could be employed more fruitfully in various sacristies...

...such as the one that housed this, for example...

Twitch of the mantilla to Bad Vestments.
Posted by Mulier Fortis on 2.11.10 9 comments:

The Progress of Monsignor Furretti 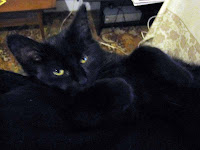 I was warned that Monsignor Furretti might go the same way as Cardinal Catzinger, and told to keep a close eye on her. Unfortunately, she is definitely not herself... she's off her food and much quieter than she has been. At the risk of conjuring up images of the Dead Parrot Sketch, I think she is pining... albeit for her brother and not for the Norwegian fjords...

I was advised to leave it for ten days before getting another playmate for her, just in case there was a viral cause behind Catzinger's death (see, I told you the vet didn't know.) Personally, I think I need to get another kitten as quickly as possible, otherwise Furretti will get bored and lonely. It won't be quite so bad once she starts to go out, but right now she's cooped up in the flat... and even when I'm home, I can't spend all my time playing with her. 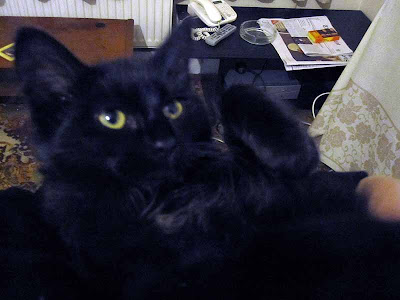 I'm also finding it difficult to judge whether she isn't eating because she's pining, because she's ill or because she doesn't like the food. I've tried lots of different types... she's so little that I'm loathe just to wait until she's hungry enough to eat what's available. I was eating a steak pie two nights ago, and she seemed interested in that... so much so that she nearly took my finger off when I relented and gave her a little sliver of steak (she hadn't eaten all day.) I also gave her some of my tinned tuna... this morning she ate the catfood, but she hasn't touched it since...

I'm probably worrying too much, and she'll probably eat if she gets hungry enough. There are kitten biscuits available, and water as well...

In the meantime, here is the Dead Parrot Sketch for those of you who don't know what I mean by "pining for the fjords" !

The audio version had a different ending: Palin says: "I got a slug." Cleese asks, "Does it talk?" Then, in a twist, Palin replies "Yeah!" and so Cleese says "Right, I'll take that one then!"
Posted by Mulier Fortis on 31.10.10 8 comments: