I haven't quite finished reading the sermons of St Alphonsus Liguori; they really are excellent (if a little daunting: I get the distinct impression that the great man didn't suffer fools gladly, and he believed in calling a spade a shovel, and whacking you over the head with it into the bargain... just to ensure you got the point!) but each sermon needs to be digested carefully, and pondered... and this takes time.

However, one of the books I bought at the Day with Mary keeps beckoning: much as I hate to have more than one non-fiction book on the go at any one time, I found it impossible to resist.

The Incorruptibles by Joan Carroll Cruz is a careful study of the incorruption of the bodies of various saints and beati of the Catholic Church.

I had been vaguely aware, when I first came back to the Church, that many saints had been found to be incorrupt, but hadn't given it much thought. I had a very "protestant" view of the saints - they were in heaven, because the Church said so, but I didn't need to worry about them, still less actually pray to them, because I would go straight to the top... JC himself, and no messing about with any minor intermediaries... I prayed to Our Lady, but only because the big man was a good Jewish lad, and so was likely to be rather fond of his mother...

Things changed for me after I experienced the direct intercession of St. Jude. Having been told by the hospital bed manager that my surgery would definitely not happen within the next six months and probably not for a further six months after that, I decided to start a novena to St Jude... mostly to humour a friend who was a devotee. I was seriously ill, and didn't manage to keep up praying the novena. However, on what would have been day 9, a letter landed on the mat from the hospital. Surgery had been scheduled for the end of the month, and could I please ring to confirm availability. I immediately rang the bed manager to say that I was indeed "available" and to ask why she had previously been so negative. She didn't know why there had been a change: apparently the surgeon had just come in and said that my surgery was to be scheduled at the end of the month. Full of joy, I hobbled over to Mass. The Gospel reading: pick up your bed and walk! Wooooooh! *Cue spooky music*

But I still wasn't too sure about the phenomenon of incorruption. I assumed that it was easily explained as some sort of natural mummification process. Hey, I'm trained as a scientist... we always try to explain stuff away... 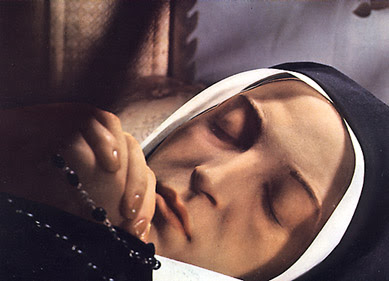 St. Bernadette is lying there in a crystal glass and gold coffin, for everyone to see. She has not been embalmed or preserved in any artificial way (her face was painted with a very thin layer of wax to prevent discolouration caused by the soap used to wash her body when it was exhumed, forty years after her death.) She died in 1879 after years of a debilitating illness, and she still looks better than I do. She looks as if she'll wake up at any moment...

...Natural mummification doesn't leave you looking like that. Natural mummies are shrivelled, shrunken, even frightening...

Well, as Joan Carroll Cruz explains in her book, the tests to which these incorrupt saints are subjected are rigorous. This is not something which can be explained away... and it is only seen in saints of the Catholic Church. As the publisher's description put it:

The Incorruptibles are a consoling sign of Christ's victory over death, a confirmation of the dogma of the Resurrection of the Body, a sign that the saints are still with us in the Mystical Body of Christ, as well as a proof of the truth of the Catholic Faith - for only in the Catholic Church do we find this phenomenon. 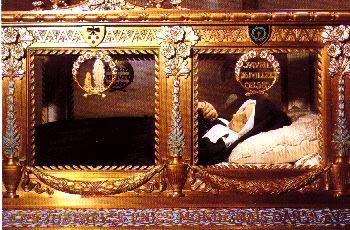 OK, quick. jump over to my blog for my St Bernadette Story....

Amazing picture of St Bernadette there. I should go there myself one day. I've linked you on my blog.

Splendid. Keep up the good work!

One of my sisters chose Bernadette as her confirmation Saint.
Because of the Motown song.
[Gets back on topic.]

I LOVE Bernadette, and was positively fascinated by incorruptibles as a child.
I had a book on Catherine Laboure that I would read over and over again.

The words of psalm 44 comes to mind:

Thou art beautiful above the sons of men: grace is poured abroad in thy lips; therefore hath God blessed thee for ever.

Unfortunately I can't take credit for the picture, John... they don't allow pilgrims to take photos of St. Bernadette.

One of my favourite incorruptibles is St. Francis Xavier, who first evangelized my country. His arm was still dripping blood when they cut it off as a relic after exhuming his body for translation.

A very interesting post. Are you going to let us know what saint you have for your computer - I think we all need one!

I chose St Irenaeus - he's my birthday patron saint (though I also bagsy Peter and Paul too, as it's the vigil of their Solemnity) - because, as the author of Against the Heresies, I figured he would keep me on the straight and narrow...
;-)