It Isn't Working, So We Need More Of The Same...

I get so tired of hearing the same old stuff - namely that, if we had more sex education we would have fewer teenage pregnancies.

I am now a woman in my forties (aaaarghhh! How did that happen??!!) and even I had sex education lessons in school. It was a single-sex school, because most were, back then. It was a Catholic school, though I don't recall the Church's position being taught positively. It was a Comprehensive school. We had our first sex education lessons in the first year - what is now Year 7 - at the age of 11. There was no mention of abstinence as an option. We were told about condoms, the need for spermicide, the cap, the coil and the Pill. STDs were discussed. Condoms were seen as the answer to those, as were family planning clinics. Contraception was assumed to be something that every thinking girl ought to know about.

The attitude that everyone must be having sex was endemic in the medical profession - I discovered this when, aged 17, I was rushed to hospital because my periods were so heavy I nearly died - I needed a transfusion of seven units of blood. The doctors were convinced I was pregnant and having a miscarriage, and would not accept my assurances to the contrary. I was 17, I wasn't on contraception, I must therefore be pregnant. I did explain that I hadn't had sex, but that little point was ignored.

But I knew the facts of life. ALL my friends knew them. We all knew about contraception. Girls occasionally got pregnant - it was always assumed that they must have been too stupid to get contraceptives. With hindsight, (basically, knowledge of contraceptive failure rates) I wonder if that was, in fact, the case.

I've now been teaching for 13 years. I have seen government after government decide that we need more sex education - both in the number of lessons and in the explicitness of the material. Most horrifyingly, the push is for sex education to start earlier and earlier. The attitude is "If we can only teach them about contraceptives before they become sexually active, everything will be alright." and "Obviously, the reason for the high teenage pregnancy rates is that no-one has access to contraception."

But there is more contraceptive availability than ever. Condoms are on open display in every supermarket. the morning-after Pill is promoted in schools, free contraceptive advice (and contraception) is advertised in schools, sexual health clinic information is up in doctors' surgeries and hospital waiting rooms, and council offices, and jobcentres, and libraries...

However, I never had any figures at my fingertips to rebut the constant refrain that "more explicit sex education, earlier and more often" is the only solution to the teenage pregnancy crisis...

Now Caroline (aka Blondpidge) has done an excellent, evidence-based post on the effect of government policies on the teenage pregnancy rates in this country. There has, as I suspected, been no effect. Sex education - or rather, let's be honest, pushing contraceptives - does not have any effect on the rates of teenage pregnancy.

Twitch of the mantilla to Red Maria.
Posted by Mulier Fortis on 18.6.11 3 comments:

I May Have Visitors...

The last bit of wildlife brought in by the kitties was another stag beetle, and they left it for me in the kitchen yesterday - I think it must have nipped a kitten once too often, because the half-dead beetle had been chewed, and one of its mandibles was rather mangled.

Today I think that more wildlife has been brought home. Perhaps I'm being overly paranoid, but I doubt it. I mean, does it look to you that Miaowrini just wants to pick out a good book to read...? 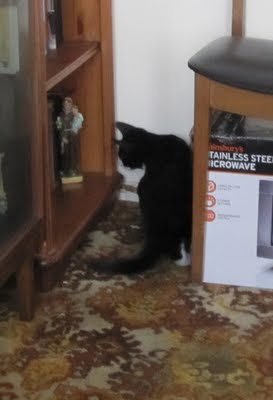 UPDATE: I think that the existence of visitors is almost indisputable... 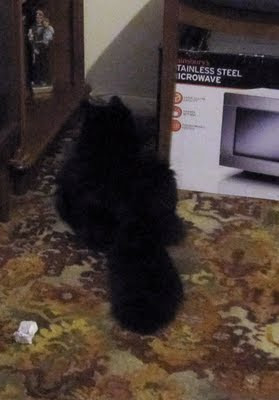 UPDATE 2: Both cats are taking an interest in my bookcase now. All personal animosity and rivalry has been put aside in the face of a common enemy. And, just after taking the next photo, I saw a mouse, obviously spooked, shoot across the room. The cats are still staking out the bookcase, so, either they are very stupid cats or I have more than one mouse in the house... Just Because You're Paranoid... Daphne McLeod, in writing to Cardinal Burke after he had cancelled the talk he was due to give, mentioned that Pro Ecclesia et Pontifice had enemies who were actively working to undermine the group.

It is true that the advertising of the Cardinal's talk was rather unwise, and might have been sufficient on its own to cause the Cardinal to withdraw. However, anyone who is in any doubt that the group is being actively attacked need only to see the news in today's Catholic Herald blog. Mark Greaves reports that Westminster Methodist Hall were told that a spokesman for Westminster Cathedral had confirmed that Pro Ecclesia et Pontifice were not the kind of people who should speak in Westminster Hall.

A spokesman from Westminster Cathedral?

Since it is the same Cathedral which sells The Suppository (a publication which actively opposes Catholic Church teaching) I suppose I shouldn't be surprised that a spokesman for the Cathedral has opposed a meeting of a group which is actually faithful to Church teaching.

It seems that Daphne isn't quite as paranoid as one might think...
Posted by Mulier Fortis on 15.6.11 11 comments:

St. Anthony Does It Again...

We had two really lovely boys serving the Masses at Lourdes. Joshua, the younger of the two, wrote a very moving guest post for Fr. Finigan's blog. His uncle Thomas, the older of the two, was rather accident-prone - he managed to leave his cassock behind one time, and got lost, and then he dropped his cassock down near the dome of the Rosary Basilica (he was left holding the handles of the bag, while the rest of the bag and contents plummeted down over the balustrade!)

Well, it seems that Joshua also managed to lose something - a 3-D picture of Our Lady, which, somehow or other, fell out of a bag or something in the luggage compartment of the coach. It wasn't missed until much later, and calls to the coach company failed to locate the picture.

The loss of the picture was accepted in a penitential spirit. Prayers were, however, said to St. Anthony by the family.

This evening I received a phone call from the lady who owns the company. She told me that the picture happened to turn up in the office...

Mary's Dowry Productions produce some really good DVDs and stuff... they specialise in making documentaries and films about saints and martyrs, especially the English and Welsh ones. Mary's Dowry Productions is run by the Bevans family - Gary Bevans being famous for painting a replica of the Sistine Chapel ceiling in his parish church at Goring-by-Sea.

The old website isn't going to be taken down (much to my relief - see one of my previous rants on this topic) as there are quite a few useful links on it, but they do want people to be able to update their blogrolls and so on.

Some Of You People Are Seriously Sick...

That's assuming my stats are correct.

According to Blogger, my post on the game of Liturgical Chicken has received nearly 11,000 views... compared to just over 1,600 for the second-most popular post, the one about my heresy-destroying kitty cat.

For those of you who were hoping to find pictures of actual chickens, trust me, playing Liturgical Chicken is much more fun...
Posted by Mulier Fortis on 12.6.11 3 comments: