I am not a theologian. I am just a laywoman attempting to follow the teachings of the Catholic Church, and thereby get to heaven. I have no doubt that, should I attain my goal, this will be via a lengthy stint in Purgatory, and by the grace of God, through the intercession of our Lady and the assistance of my Guardian Angel and the saints.

The uncertainty about whether I attain the heavenly realm is in no way due to any doubts about the mercy of God. Rather it is due to my own knowledge of my sinful tendencies, and the possibility, through God-given free will, that I might commit a mortal sin. I have, as we say, "got form." This year I celebrated the 24th anniversary of my reversion to the faith, but it has been a long spiritual route-march with many falls and stumbles along the way rather than an instantaneous and complete conversion of life, and I haven't finished the journey yet.

The spirit is willing, and all that, but... well, you know the rest!

However, since my reversion, no matter whether I stumbled on my path to holiness (or even walked in completely the wrong direction), I knew that there was a correct way that I should be trying to follow, and I knew that this direction was signposted clearly through the teachings of the Church.

These teachings are clear. They have been based on what our Lord Jesus Christ said and did and on the teachings and traditions passed on by the successors to the Apostles, particularly the successor to St. Peter. It was to St. Peter that our Lord Jesus Christ gave the keys of the kingdom of heaven and the mission to strengthen and confirm his brethren in the faith. The teachings are so clear that it was possible to put them into a little Penny Catechism, in simple question and answer form so that pew-fodder such as myself could understand it. We were later given the Catechism of the Catholic Church, less easily digested, perhaps, but still clear. You can look stuff up. In the index. And it can all be traced back to the beginning - the teachings of Christ - although some of it had to be thrashed out in Councils and Papal documents to make it absolutely clear.

Hopefully, despite my waffling, you can see where I'm going with this...

The current lack of clarity in Amoris Laetitia is profoundly distressing. Papal pronouncements are not meant to be ambiguous starting points for discussion - rather, they are meant to explain the teachings the Church has held since the beginning. The fact that four Cardinals of the Church felt that the Apostolic Exhortation needed clarification is disturbing enough. The silence of the Holy Father on the questions raised is even worse. The Pope is meant to teach us, not leave us to figure it out for ourselves. Mankind is fallible, and is expert at rationalising, excusing and explaining failure to follow the moral law. What he needs is encouragement to strive to keep that law, safe in the knowledge that there is a right path.

Otherwise, why bother even to try?

(The photo above is one I took of Cardinal Burke and Fr. Timothy Finigan, on the occasion of the Cardinal's visit to the Shrine of St. Augustine in February 2015. Cardinal Burke was one of the four Cardinals who submitted the five dubia to Pope Francis.)
Posted by Mulier Fortis on 10.12.16 7 comments: 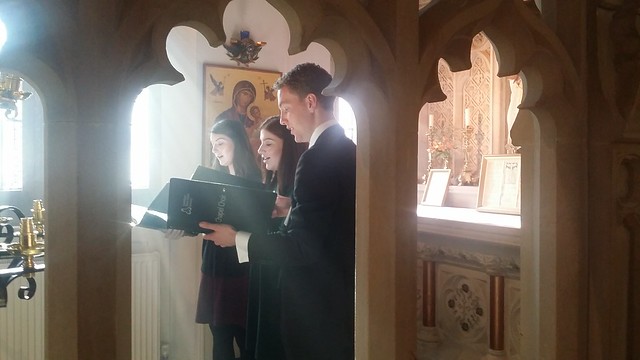 We are in for a real treat this Sunday! The schola Cantabo Dominum, a group from Canterbury Christ Church university will be singing for the Missa Cantata at St. Austin & St. Gregory's, Margate. They visited for the first time quite recently, for the feast of Christ the King, and they sounded awesome.

The music will be novel (lots I have never heard) - Lotti's Missa Brevis in D minor, Haydn's Ave Maria, and Palestrina's O bone Jesu and Alma Redemptoris Mater. Thanks are due to the Latin Mass Society which has given a grant to cover the expenses of the schola.

Hopefully I will be able to get a few photos!
Posted by Mulier Fortis on 10.12.16 No comments: