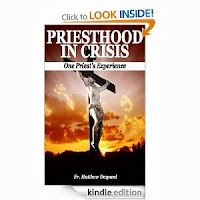 It's awful to contemplate. If even half of what Fr. Despard recounts is true (and Fr. John Abberton is of the opinion that his account does indeed ring true) then the Church in Scotland is in a shocking mess. The scandal of Cardinal O'Brien is merely the slightest tip of an iceberg which would sink a whole fleet of Titanics.

Just as Michael Rose's book, Goodbye Good Men exposed the homosexual culture existing in US seminaries from the 1970s until as late as the 1990s, Fr. Despard's book makes it clear that the Church in Scotland resembles the Augean Stables.

I couldn't bring myself to finish Goodbye Good Men, and I'm having problems reading Priesthood in Crisis. It is horrible.

Apparently the further appointment of Bishops in Scotland has been put on hold until the whole sorry mess has been fully investigated by the Nuncio, Archbishop Mennini.

I am sure that I cannot be the only person to wonder whether, given the total lack of appointments to the ever-increasing number of vacant Sees in England & Wales, the state of the Church south of the Border is coming under the same scrutiny as that in Scotland. After all, Pope Francis has appointed Bishops in other countries which have not had such long-standing vacancies (the Bishop of Buenos Aires being a case in point!)

By the way - it is interesting to note that the e-book is apparently no longer available for sale through either the Amazon UK or Amazon US sites...

I've been having problems with blogging material.

I don't seem to have had any.

After staring at my computer for the best part of an hour in the hopes that inspiration would strike, I have decided to give up and go into the church and pray.

In the meantime, I thought I'd share a rather nice video from the Solemn High Mass in honour of St. Margaret Clitherow, celebrated at St. Wilfred's Church, York, on 4 May 2013. The Rudgate Singers sang Gregorian chant and polyphony by Victoria, Bardos, Croce and Webbe. The video isn't very "visual" but they've got a few nice tunes you can listen to.*