The film Blood Money, which exposes the aims and actions of Planned Parenthood, has made it to the UK. 40 Days for Life, London are bringing the film over here on Wednesday, 27 October at 7pm. It'll be at a Central London cinema, though I'm not sure which one...

Tickets cost £10 each and there are resources to be given out to all ticket holders.

This film needs to go global, to expose the evil of the abortion industry and the result of the contraceptive mentality...

It seems that Terry from Abbey Roads has just lost Xena, his beloved cat.

I am trying to be organised. In a few weeks' time I shall be renewing my vows.

I am hoping to arrange a Solemn High Mass, but we're having one or two problems in locating a Deacon... and the Subdeacon is proving elusive, although he should have the date booked already...

At any rate, the Mass will be at least a Missa Cantata, as I'm renewing my vows on the first Saturday of December (December 4th, to be precise) which coincides with the visiting schola's attendance at Blackfen. Mass starts at 10:30am, and then, after a brief pause, the vows ceremony starts at 12noon. That won't take too long, and the bun fight will be in the Large Hall until about 3pm. The bar will be open this year - I double-checked!

Hard to believe it's been eight years already. I described the vows I have taken in a previous post. Although I do not need to renew the vows - they're permanent as far as I'm concerned - after consultation with my Spiritual Director, I decided that it's quite helpful to have a reminder of the reason behind my vocation.

If any of you are in the vicinity on Saturday 4th December, 2010, then you will be most welcome for all or part of the day. Directions to Our Lady of the Rosary, Blackfen are on the parish website. If you know that you are able to come, it would be helpful (for catering purposes) if you leave a message in the com-box, but last-minute arrivals are also welcome!
Posted by Mulier Fortis on 15.10.10 4 comments: 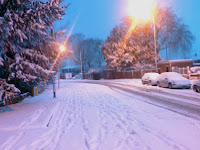 I was messing about on YouTube, and I found this "Simon's Cat" video, which rather reminded me of the times I had to clear the snow from the ledge outside Sylvester's cat flap... he didn't think much of snow, as his paws got cold and wet...

I was chatting to Zephyrinus this evening, and he was trying to recall a name...

It reminded me of the scene from The Young Frankenstein, and I couldn't resist suggesting "Abby someone!"
"Abby? Abby who?" came the response.
"Abby normal!" quoth I.

This allusion was lost on Zephyrinus, who is far too cultured to watch such stuff. Anyway, in the interests of his education, and because I thought it would amuse, I give you the relevant clip...

"He Said Horrible Things About Us...!"

Oh dear, oh dear... Methinks that the Diocese of Middlesbrough has over-reacted just a tad... Slapping a terms-and-conditions clause on the front of one's website is not really going to encourage anyone to read it...
Posted by Mulier Fortis on 12.10.10 3 comments:

The Naming Of Cats... 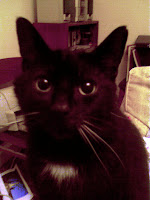 I am starting the search for Sylvester's successor... actually, I hope to get two cats, to keep each other company during the day when I'm out at work. My mother suggested that I get two kittens, because they are cute, and I missed Sylvester's kittenhood because I "inherited" him from my sister when he was about four years old... However, kittens are hard work, especially on furniture, and my landlord might have something to say about it...

I mentioned to His Hermeneuticalness that I was gearing up for the new kitty search, and he immediately wanted to know what I would call my next cat, or cats... The poem by T.S. Eliot flitted through my mind at that point...

I opined that it rather depended on meeting the cat. Sylvester, for example, was not named for the feline in the Tweety-Pie cartoons, but for Pope St. Sylvester - I thought that the name suited him... I later discovered that Felis sylvestris is the Latin name for the wildcat, which merely confirmed my instinctive choice.

Fr. Tim disagreed, so we discussed possible names. I explained that I didn't want a name that could be mistaken for a real person, so "Benedict" isn't an option.

Working on the papal theme, Fr. Tim suggested that I name a cat for Blessed Pius IX - Mastai-Ferretti. I pointed out that it was a bit of a mouthful, but the idea of Mastai-"Furr"-etti did appeal. A little further research when I returned home revealed further possibilities: Meow-ro Cappellari (Gregory XVI) and Gioacchino Purr-chi (Leo XIII.)

Anyway, while we're on the subject (it's a slow day for me blogwise) here is the famous poem by T.S. Eliot (I used to know it off by heart!)

The Naming of Cats is a difficult matter,
It isn't just one of your holiday games;
You may think at first I'm as mad as a hatter
When I tell you, a cat must have THREE DIFFERENT NAMES.

First of all, there's the name that the family use daily,
Such as Peter, Augustus, Alonzo or James,
Such as Victor or Jonathan, George or Bill Bailey--
All of them sensible everyday names.

There are fancier names if you think they sound sweeter,
Some for the gentlemen, some for the dames:
Such as Plato, Admetus, Electra, Demeter--
But all of them sensible everyday names.

But I tell you, a cat needs a name that's particular,
A name that's peculiar, and more dignified,
Else how can he keep up his tail perpendicular,
Or spread out his whiskers, or cherish his pride?

Of names of this kind, I can give you a quorum,
Such as Munkustrap, Quaxo, or Coricopat,
Such as Bombalurina, or else Jellylorum-
Names that never belong to more than one cat.

But above and beyond there's still one name left over,
And that is the name that you never will guess;
The name that no human research can discover--
But THE CAT HIMSELF KNOWS, and will never confess.

Keys Of The Kingdom...

Following the success of Arise Once More, Chris Holden, brother of Fr. Marcus Holden, has produced an inspiring and informative DVD on the Papacy.

Called Keys of the Kingdom, the film begins by outlining the foundations of the Papacy, when Jesus announces Simon Peter as "The Rock," on which the Church will stand. From there the journey unfolds through history, from the early Christians within the Roman Empire, to the present day global influence of the Church. Through all manner of trials and difficulties the Papacy has remained constant throughout, leading God's people along the path of salvation.

Arise Once More was fantastic, and the promo video for Keys of the Kingdom suggests that the new DVD will be even better...

You can order the DVD (along with plenty of other sound Catholic DVDs, CDs and books) from St. Anthony Communications.
Posted by Mulier Fortis on 12.10.10 No comments:

The Good Counsel Network is organising a St Raphael's Credit Crunch Ball on Saturday 30th October, and they asked me to help publicise it, something I am very happy to do.

They are offering a two course meal and live music. They also promise that, while the price has been cut, the quality of the food and entertainment is totally intact! 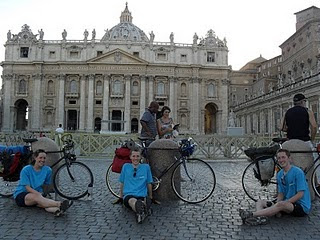 Anna-Marie has emailed me with the information that the Via Romea cycling pilgrimage to Rome has, through your generosity, succeeded in raising a fabulous £7175.12, to be divided between Mary's Meals and the Cardinal Winning Pro-Life Initiative.

The trio are turning their blog into a hints and tips site for anyone else who is considering such madcap exploits...

If you missed it first time round, the trio even turned their adventure into a song, which I promptly recorded and stuck on YouTube.

Many, many congratulations to the three pilgrims... Now, what are you going to do next year???
Posted by Mulier Fortis on 11.10.10 No comments: 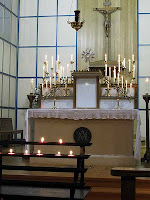 The Quarant'Ore, or Forty Hours Devotion is absolutely amazing. My first experience of it was at Blackfen last year - although I had attended a Mass during a Quarant'Ore at Corpus Christi, Maiden Lane.

It is a real spiritual boost to be able to be so close to Our Lord. Just looking at some of the pictures I took last year has given me a thrill of anticipation.

I particularly liked the watching through the small hours, though I had a few nervous moments when, knowing that all the altar servers were asleep, I realised that the candles were burning dangerously low... I ended up having to wake up one of them. I was also quite amused by the attutude of some of the youngsters: "Every time we woke up, we saw you sitting there in the front pew... how did you do it?" Heheheheh... 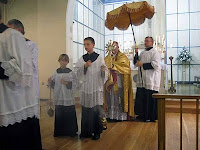 Anyway, we are having the devotion again, starting with the Mass of Exposition on Thursday 21 October at 8pm (I think it may even be a Solemn High Mass this year...) and ending with the Mass of Reposition on Saturday 23 October at 10:30am. There will be a Mass on the Friday evening as well, at 8pm... they're all according to the usus antiquior, but there will also be a Mass on Friday morning, at 10am, in the Novus Ordo.

Everyone is welcome to come along for as much or as little as they want. Details of how to get to the parish can be found via the website.

I shall ensure that my super-snazzy camera is gainfully employed during this year's event.
Posted by Mulier Fortis on 10.10.10 1 comment:

Dominic Mary has a photo of his beautiful rosary on his blog, along with the story behind it. Do go and check it out, and leave your own rosary tales in the com-box.

I haven't any rosary tales about this one (on the right), which is my current rosary - current in that it is always in my jacket pocket. I like it because the connecting "medal" is a small vial with Lourdes water in it, and each of the beads is a little rose.

I do believe in handing rosaries on to people who seem to need them, so I never get to keep them for very long...
Posted by Mulier Fortis on 10.10.10 1 comment:

Where The Hell Is Matt?

This really did make my day... I found it impossible not to smile! Details of what is going on can be found here.

Twitch of the mantilla to His Hermeneuticalness.
Posted by Mulier Fortis on 10.10.10 1 comment: