I'm not entirely sure about this...

Yes, it's a form of evangelisation. Yes, if people won't go to church, then this is a way of bringing Our Lord to the people, out on the streets...

But this is Our Lord in the Blessed Sacrament! Yes, people are kneeling. I even get the idea that a couple of catholic shoppers, realising what has happened, have stopped to kneel for a while before moving on.

But it just doesn't strike me as reverent enough.

I would have liked the friar to have at least a humeral veil...

As for putting Our Lord in the holdall - euwwwww. Definitely not good.

There was a time, I understand, when priests carrying Our Lord in viaticum to the faithful would be accompanied by an acolyte ringing a bell. Catholics would kneel as he passed.

What's wrong with a Eucharistic Procession? That would achieve the same thing, but it would convey the reverence due to Our Lord in the Blessed Sacrament. A few torch-bearers, a canopy or umbrellino (I have to confess ignorance as to when one uses a canopy rather than an umbrellino), a thurifer or two, and a few bells... much more likely to attract attention!! Much more... ummm... Catholic, if you know what I mean...

A twitch of the mantilla to the marvellous Fr. Z. He's got a poll running at the moment if you want to register your feelings... at the moment the majority seem to think it's a great idea. Do go over and contribute... but it would be nice to get a comment or two here first, as I'm feeling a little neglected... (Yes, I know I should post more, but I've been busy...)
Posted by Mulier Fortis on 25.6.11 13 comments:

A Time For Prayers...

Just when things seemed to be settling down, it all flares up again. There is some really horrible stuff happening right now. Not to me personally, I hasten to add... but all the baptised are parts of the Body of Christ, and so we are all affected by the wounds.

I'm with Bara Brith on this one.

I came home this afternoon to find both kittens looking guilty. I assumed that they had knocked something over, or perhaps had brought home yet another stag beetle. If stag beetles actually do become extinct, I suspect that my two little hooligans will be partly responsible.

I walked into the sitting room, and found that it was covered in feathers. 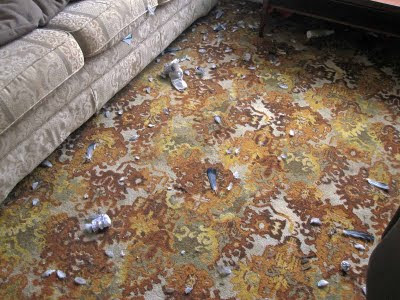 There were so many feathers that I thought they'd ripped open one of my pillows, or perhaps the duvet. Then I remembered that I don't have any feather pillows, and the duvet is synthetic too. I realised that some sort of battle had been going on, because several balls of paper, pens and ping-pong balls had been unearthed as well.

Furretti was going into ecstasies over one of the feathers she had caught... 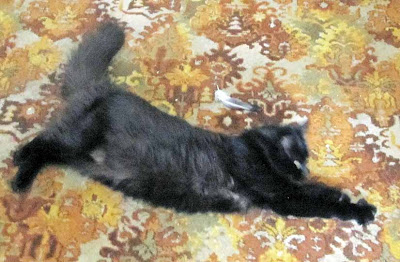 Miaowrini was prowling around by a small side table between the sofa and the bookcase. I prepared myself to find blood, guts and other gore, but the erstwhile owner of the feathers appeared to be very much alive, and fighting back, which explained Miaowrini's cautious approach... 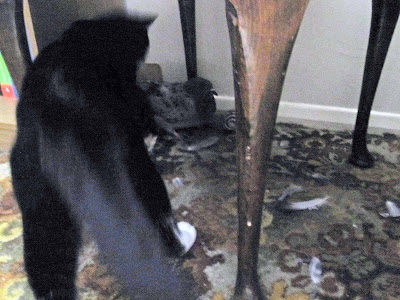 It seems that, while there are some basic instincts in operation here, the kittens (both of whom were abandoned) are rather at a loss once they succeed in catching their prey and bringing it home. They obviously need mum to show them how to dispatch the critters... or perhaps I just feed them too well...

I grabbed a towel, pulled the sofa out (there were even more feathers strewn along behind the sofa) and snaffled the pigeon. I was a little unsure as to how badly injured it was - there appeared to be chunks missing from its wings, and bite marks near its neck - but when I opened the towel outside, the bird flew off - very unsteadily, but it did eventually made it up to the safety of a neighbouring rooftop.
Posted by Mulier Fortis on 21.6.11 6 comments: