I woke up very early this morning to see a fiery red glow on the wall - a spectacular sunrise (or it would have been, if I'd had my contact lenses in!) But, "Red sky at morning, shepherds' warning!" is the old saying, and so I wasn't surprised to find that the skies at lunchtime were grey and forbidding, and it was cold and wet. I suppose we ought to expect rain in April.

It wasn't raining very much, though, so I decided to go for a little stroll along Marine Drive.

First of all I went in to the Sunset Rock Shop - they have a wide selection of different rock flavours, including the traditional peppermint and spearmint, as well as slightly odder offerings such as curry flavour, gin and tonic flavour, and Grumpy Old Git - I suspect the latter refers to the lettering running through the rock rather than the flavour. Intriguingly, examining my photos later, I spotted boxes labelled "seagull poo" next to the fudge. I shall have to go back and investigate. 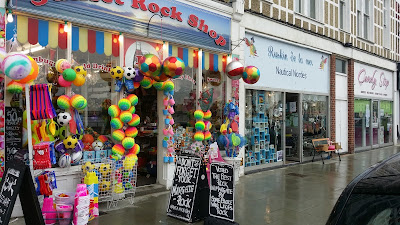 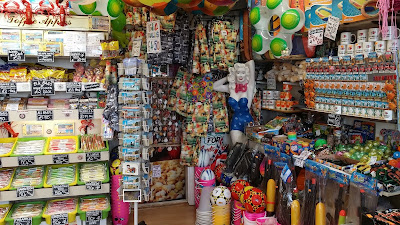 I then went to the Ruskin de la Mer gift shop. I didn't see anyone in the shop and was browsing happily, until I was suddenly greeted by the owners, Gregory and Tracey, who were sitting quietly at the back of the shop. I jumped a mile... 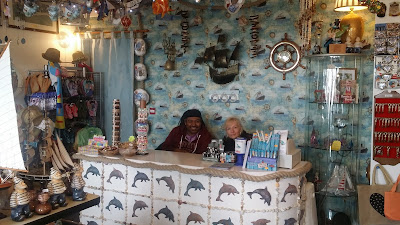 I discovered that I already follow Tracey on Twitter (she tweets as @ShopMargate as well as @RuskinRap) and the three of us chatted for a while about how fabulous Margate is. The shop was gorgeous too - I shall have to go back when I need to buy presents for my nephews!

Tracey also told me about a charity she is promoting, Beach Within Reach, to allow people with mobility problems to travel over the sandy beaches of Thanet in specially adapted, all-terrain wheelchairs. 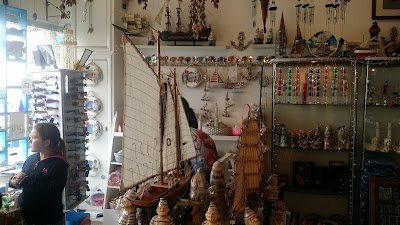 Crafted Naturally was next on my itinerary. I was delighted to see that Pumpkin had been reinstated as Marketing Manager after his recent illness. Wendy told me that the poor puss had lost well over a third of his body weight. However, he's now on the mend - and he consented to pose, and to purr when his ears were scratched... 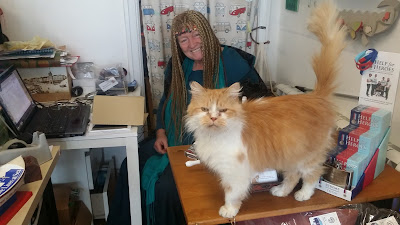 Wendy also told me about her new website for the range of campervan (and VW Beetle) goodies (for anyone unfortunate enough not to be able to get to Margate in person!) 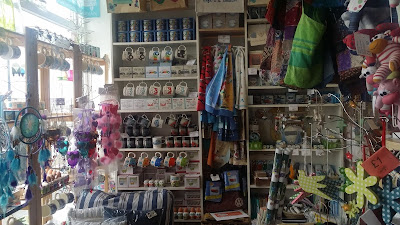 By this time I was feeling peckish, so I strolled in to Bernie's Chocolate Bar for a little light refreshment. Sadly I couldn't manage to perch on one of the tall stools by the window, but was able to catch glimpses of the sea from my table, and Bernie came over for a brief chat while I scoffed the delicious carrot cake and luxury hot chocolate... 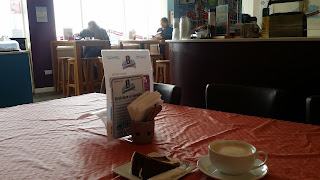 Finally, I stopped off at The Two Halves - not for a drink (I was driving) but to apologise for having missed their latest Curry Night. Again. I found Jackie and Sean cutting up the names of runners for a Grand National Sweepstake. I couldn't resist, and promptly bought two tickets. 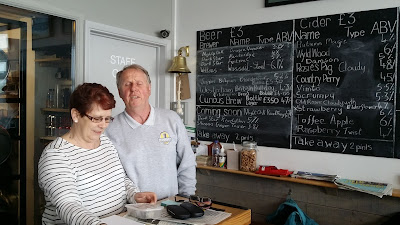 I drew Gilgamboa and Many Clouds; It meant nothing to me - I'm not a sporting type. However, I thought that the latter sounded promising, given the weather, and was informed that it was actually the favourite. So it's probably the kiss of death for that horse...

A bit like the time I entered the Rugby World Cup sweepstake at work, and asked if my team were any good.
"Who have you got?"
"Ummm... New Zealand..."
Unfortunately for me, the All Blacks were knocked out pretty early that year...
Posted by Mulier Fortis on 9.4.16 5 comments: