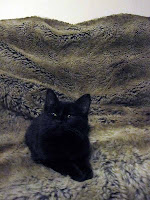 Foolish, foolish woman that I am...

This evening, I happened to spot a shop in Bluewater which sells traditional sweets, such as aniseed balls, cough candy, barley sugars and licorice bootlaces. The sweets were even weighed out on old-fashioned scales and wrapped in paper bags! I treated myself to some aniseed balls and apple bonbons (a little trip down memory lane before I get to amnesia alley) and, on my return home, mightily pleased with my purchase, I put them down on my bedside table while I went to read my emails. 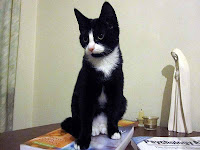 On returning to the bedroom, I discovered one kitten playing with aniseed balls, while the other was sitting in the middle of the other paper bag (which had kitten toothmarks in the bottom, along with a large hole) entranced by the bonbons...

Needless to say, the expensive catnip-filled balls and mice I have purchased previously for the amusement of my feline friends are lying around the flat, abandoned and neglected...
Posted by Mulier Fortis on 28.1.11 4 comments:

Vincenzo has posted an excellent article by Mgr. Charles Pope about Colombo Cathedral's mandate that women should be veiled in church. It seems, from the original piece, that concerns were being expressed about standards of dress, and so the Cathedral authorities decided to get everyone's attention with the head covering rule. Personally, although I would like the practice to be reintroduced, I think Colombo Cathedral's approach is a little heavy-handed...

This might surprise a few of you. But it all boils down to the reason for wearing a head covering. Mgr. Pope gives the main ones, and promptly demolishes them...

Canon Law no longer insists on women covering their heads in church. If that is the case, then I find it hard to understand why the cathedral in Colombo is insisting that women must be veiled. If, as they say, there are problems with dress standards, then I believe that those are what need to be dealt with. Sticking a veil on top of a woman's head will not make up for the fact that she is wearing an all-too-revealing crop top.

I choose to wear a mantilla - for a few reasons.

Firstly, I like the traditional idea that a woman's hair is her crowning glory, and as such it is veiled in God's presence as a sign of humility. I also like the fact that I have to stop on my way in to the church to put my mantilla on - this helps me to avoid treating the place as just another building - I put the mantilla on and in doing so I get the chance to recollect where I am and with Whom I am about to converse. This is the strongest argument (for me) about not exchanging the mantilla or veil for a hat. Hats are generally worn outside as well, and so there is no special indication that one is entering the house of God. Finally, the mantilla helps me to avoid distractions - it shields my face from those around me, and, rather like the nun's veil, encourages me to ignore whatever is happening at either side, encouraging me to turn my gaze towards the altar.

Many women feel self-conscious about wearing a mantilla or chapel veil. I would encourage them to give it a go - it feels strange at first, but you soon get used to it. I now would feel very odd indeed if I were to enter the church without my head covered.
Posted by Mulier Fortis on 25.1.11 17 comments:

Following on from my post with Fascinating Aida's take on cheap flights, I thought I'd add Rhod Gilbert's experiences with another budget airline and lost luggage...