The statue of Our Lady in Blackfen was decorated for her Nativity. Sadly, having gone to the church straight from school, I didn't have my camera with me. However, I have a rather nice photo taken on another important occasion... 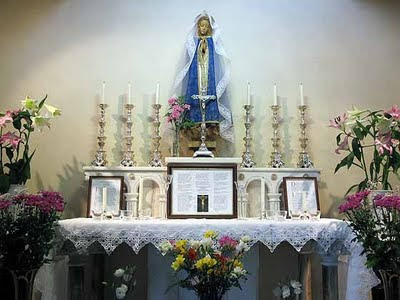 It was rather nice having Rosary & Benediction on Our Lady's birthday...
Posted by Mulier Fortis on 8.9.11 No comments: 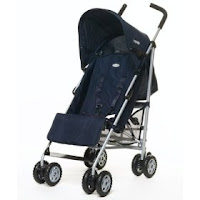 My eyes are propped open with matchsticks right now, and I'm desperate to get to bed, but I just had to respond to this one - Clare from the Good Counsel Network has sent out an urgent and heartfelt plea for help.

Good Counsel (in much the same way as the Cardinal Winning Pro-Life Initiative) puts its money where its mouth is, and gives actual practical help to mothers in crisis pregnancies. These mothers would possibly have felt that there was no alternative to abortion without the help they receive from Good Counsel, and so the work that is done really does save lives.

I don't know if the Good Counsel Network would appreciate donations of actual goods via Amazon (as has been advertised before for the Sisters of the Gospel of Life when they have had an appeal) but funds are perilously low, so any money you can spare would be gratefully received.

The threat to the unborn is higher than ever, especially now. We need to show that we offer support for mothers who choose to keep their babies rather than have an abortion - something Marie Stopes and BPAS would never do. Please, please, help if you can, and everyone please pray for the work to succeed.
Posted by Mulier Fortis on 5.9.11 6 comments:

And With Your Spirit...

This evening I attended my first Mass where the people's responses were taken from the new translation. I've been muttering "And with your Spirit" under my breath for a couple of months now, so I had no problems with that. I loved the fact that the Creed and the Gloria more closely reflected the structure of the Latin (I've become much more familiar with the Latin through singing it at the Extraordinary Form Mass) and the congregation didn't appear to have any problems with the phrasing.

Obviously there were slip-ups - it's all too easy to drop back into the version we've been using for so long - but that will soon pass.

I've been vaguely aware of negative murmurings - The Suppository's latest offering being a case in point - but claims that the phrasing is too clumsy for a congregation to recite are palpably untrue. A group of people can recite anything together if they practice. I've done it as a silly exercise in class: "All together now: Respiration is not the same as breathing!" What makes the difference is the person leading the group. If the priest reads the Confiteor, Gloria, Creed and Sanctus firmly and clearly, then the congregation will automatically modulate their speech pattern to fit in with him. It really isn't rocket science.

If the priest is positive about the new translation, then the congregation will take to it like ducks to water. It won't be absolutely perfect at the start, but I expect there were difficulties the last time too (funny how no-one ever seems to mention the frequent changes during the early phase of the Novus Ordo!)

Of course, if the priest is opposed to the idea of fidelity to the original texts, then he will find the phrasing very difficult, and the people will then find it hard to pick up his speech patterns, and the whole experience will become very negative indeed.

It would appear that the attitude of the priest is central to the whole thing... how very Novus Ordo! Oh well, if it's really too hard, one can always try it in Latin!!
Posted by Mulier Fortis on 4.9.11 5 comments: