I obviously have a little too much free time on my hands this holiday (ie. I'm not spending as much time as I should on preparing for the new term) but I came across Indolent Server's blog. He's been posting some cute cartoons of an altar server called Speck... I was also highly amused by his referring to female altar servers as "serviettes" ! 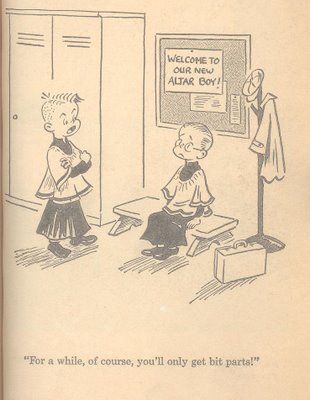 Tomorrow is the day that the AS and A Level results are published in England. Students (and teachers) have a pretty awful time of it: if the percentage of pass grades is higher than previous years, then the media have a field day slamming the exams for being too easy; if, on the other hand, the percentage is lower, then teachers, schools and colleges are hammered for failing to provide a decent education...

...there is no doubt that exams have changed drastically - and I do think that the old GCE 'O' and 'A' levels were of a higher standard: there were far fewer structured questions, for example, and the increased number of essay-type questions meant that students had to organise their answers more carefully. However, the breadth of knowledge for each subject has increased drastically (sacrificing depth in many cases), there is far more emphasis on evaluating information rather than recall, and the sheer number of papers taken for each subject is such that today's students have to work incredibly hard, and probably harder than previously.

So spare a thought (and a prayer) for any students who are awaiting their results tomorrow (and the GCSEs next week.)
Posted by Mulier Fortis on 16.8.06 2 comments:

To accompany my little rant-ette on hymns modern (I have few problems with hymns ancient, apart from agreeing totally with Dilexit Prior about keeping the traditional Latin hymns in Latin), I thought I'd draw your attention to the following new signs which might, in these days of litigation, be of use in some of our parishes... 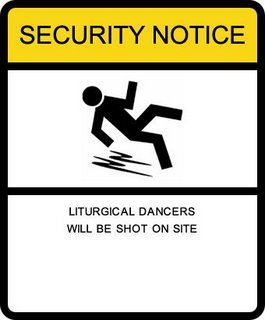 More can be found courtesy of the Dumb Ox.

Hat-tip (or should that be mantilla-tip?) to the Moral Highground for this one.
Posted by Mulier Fortis on 15.8.06 2 comments:

Recently I've been asked by a few people why I wear a mantilla. It occurred to me that it might be worth posting a few thoughts on the matter.

I have a problem with one of my knees which prevents me from kneeling. It is difficult to explain why this should cause me any distress, because it's hardly my fault, but I felt very strongly that I wanted (and even needed) to make some outward sign of respect for Our Lord, present in the Blessed Sacrament. As well as kneeling, the traditional sign of respect given by men has always been the removal of their hats, and in the same way, women covered their hair, either wearing a mantilla, another type of headscarf, or a hat.

Once I began to look into the wearing of the mantilla in more detail, I discovered that the reason why women covered their heads (or more accurately, their hair) was because the hair was seen as a woman's "crowning glory" and a sign of her beauty, and therefore to cover her hair is a gesture of humility before God.

I also find that stopping in the church porch to put on my mantilla helps to remind me that I am about to enter God's house, and that I am entering into the presence of God. Because of this, it is a real aid to prayer - we are both body and soul, so outward signs are important (though obviously they can't be the only things we focus on.)

I read in one article the suggestion that wearing a mantilla could be considered a sacramental - I'm not sure whether this is so, and would be interested to hear from any priests out there who have views on the subject.

If there are any women out there who are thinking about wearing the mantilla, but are a little self-conscious, I would really recommend it. It soon becomes second nature, and before you know it, you'll feel positively undressed without one!
Posted by Mulier Fortis on 15.8.06 7 comments:

While surfing the net this evening (well, ok, it was late when I got in, so it's been more of a brief paddle) I came across the following interesting little snippet from George Weigel (I presume it is the same George Weigel as wrote the biography of John Paul II) on the importance of the hymns we sing... if we are actually going to sing hymns at all.

I know one or two people who would prefer to get rid of all hymns and just stick to Gregorian chant and I have to confess that I am not one of them... but I do like my hymns to be rooted in solid theology, and to have a reasonable melody... and the language has to be poetic (if it's in the vernacular.)

I didn't recognise all the hymns George mentioned (I presume they're American "favourites") but I rather liked his idea about a 50-year ban on the hymns that, while not bad in themselves, have been played and sung to death... I would add "especially in schools" to that, because there only seem to be a handful which are trotted out with painful regularity.

I especially loathe "Here I am, Lord" (if it's played at the wrong speed it can be teeth-achingly bad) "I am the Bread of Life" (especially the PC version, which just clunks) and "Walk in the Light" (ouch !)

So, any other hymns we should expunge from our parish hymn books?
Posted by Mulier Fortis on 15.8.06 6 comments: