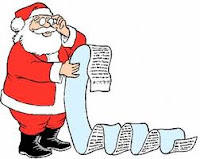 Sorry for the lack of blogging lately. Lots going on, unfortunately none of it bloggable... However, I really had to comment on this one.

Apparently, some Argentinian Archbishop is this year's nominee for the Scrooge Award. He denied the existence of Santa Claus. This incensed the excellent writer and broadcaster, Dr. William Oddie and drew a rather more sympathetic response from the equally excellent Fr. Ray Blake. This has led the (IMHO) best Catholic weekly newspaper, the Catholic Herald, to open a debate on whether children should be told that Father Christmas isn't real...

I beg to differ.

First of all, there is the theological argument for the existence of Santa Claus.

And, if that isn't enough for you, there is the scientific analysis of the evidence...