A new academic year has started for us here in Merry Old England. It's a pretty exhausting time for teachers (IMHO) - at least until we've sussed out our new timetables and classes... and in some cases, new exam specifications as well.

To celebrate the fact that I'm not as zonked out as I was last weekend, I have revamped the blog layout just a little. I had a look at the "Dynamic Views" option as described by His Hermeneuticalness, and decided that I like the idea, so that option has found its way into the sidebar, as has the option to have updates from the blog emailed to you. Personally I prefer to use Google Reader for that sort of thing, but, if it floats your boat...

I think the colour scheme and background picture are pretty much set - it's my trademark "look," I think. Do tell me what you think of the overall effect, and I'm interested in any suggestions you may have for further improvements...
Posted by Mulier Fortis on 17.9.11 9 comments:

I was asked to publicise the LMS Pilgrimage to Aylesford, and I'm delighted to be able to do so. I thought Fr. Tim had advertised it already, but it seems that, in my slightly bemused state last week, I put up a (real) poster in the church porch...

The music at the Mass will be contemporary with St. Simon Stock, which is rather exciting. 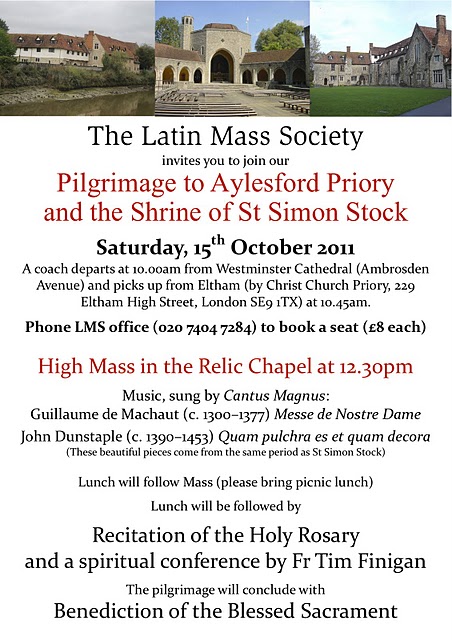 Ches and Mrs Ches have just announced the arrival of a daughter... do pop over and give your congratulations!
Posted by Mulier Fortis on 16.9.11 No comments: 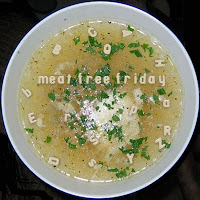 I don't normally eat breakfast, but was absolutely starving this morning, so popped downstairs to the school canteen when it opened for breakfast. I eschewed the bacon rolls on offer, and one of the cooks made me an egg muffin instead.

There was a certain amount of satisfaction in the change from "an odd person who doesn't eat meat on Fridays" to "a Catholic."
Posted by Mulier Fortis on 16.9.11 2 comments:

The Best-Laid Plans of Mice & Pigeons... 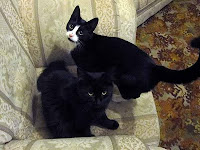 I was going to do some serious blogging this evening. I even left work relatively early. After all, it's the anniversary of Summorum Pontificum... and the SSPX have been in talks with the Vatican... all very important stuff. Alas, I arrived to find the living-room seriously carpeted in feathers, with a mangled pigeon corpse arranged artistically in the middle of it all.

It was rather bloody and a bit smelly - I think Miaowrini has really gotten into her stride.

I spent the early evening hoovering and cleaning up, and then I poured myself into the bath, along with a glass of wine.

I did consider doing a little light blogging before getting to bed, but there are two cats staring fixedly at a bookcase. Given that my cats aren't usually interested in the Barchester Chronicles or Agatha Christie, I surmise that something is trapped behind the bookcase.

I don't want to know what it is, so I'm abandoning the computer, and I'm going to go to bed instead.

I might get the chance to blog tomorrow... Don't hold your breath.
Posted by Mulier Fortis on 14.9.11 3 comments:

Earlier on today, while driving, I had an absolutely brilliant idea for a blog post.

Now I can't remember what it was...

By This You Shall Know Them...

I think it is wonderful that the Bishops of England & Wales have decided to reinstate the practice of abstaining from meat on Fridays. I understand that this is the practice in the US during the Fridays of Lent, but we didn't even have that - the only two days we were obliged to abstain from meat here in the UK were Ash Wednesday and Good Friday. There was a vague awareness that penance was supposed to be done on Fridays, but it was never really mentioned, and therefore was often forgotten.

Now it is compulsory. It isn't necessary to eat fish, and it's true that it isn't a major hardship to forego meat on one day a week, but that isn't the point. All Catholics will now be carrying out the same activity on a Friday, as a reminder that Our Lord died for us on a Friday. It's a reminder to ourselves, as much as to those around us. It is a reclaiming of our Catholic heritage, and a reaffirmation of Catholic identity.

It does take a bit of getting used to - when I first started observing Friday abstinence it seemed to be impossible - I always found myself tucking into that bacon sandwich at break time, only to recall halfway through that it was actually Friday. Eventually I got the hang of it, though up until now there has been that temptation to substitute another penance instead because it was allowed.

We might want to consider reintroducing some other Catholic practices - such as bowing one's head at the name of Jesus, crossing oneself as one passes a Catholic Church, and saying Grace before meals (especially when eating out.)

I'm sure that there are many more Catholic practices which used to be common. Suggestions in the combox please!
Posted by Mulier Fortis on 11.9.11 10 comments: