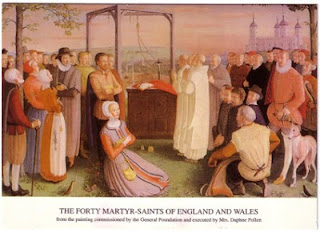 Thank God for the many priests and bishops who have signed the letter. I'm sure that there are many more who would have signed if the timescale had not been so short. Have a look at the letter, and have a look here to see if your parish priest has signed. If he has, do be sure to thank him for his act of witness, and encourage him to continue to speak out. Remember, he may shortly find himself in prison for daring to state the truths of the Faith.
Posted by Mulier Fortis on 12.1.13 5 comments:

The start of a new term has hit me with the force of a large brick smacked against the side of my head...

Nevertheless, I was delighted to be able to hear Dawn Eden's talk when she visited Our Lady of the Rosary, Blackfen on Monday night. She gave a very moving talk on how devotion to the saints had helped her overcome the wounds of sexual abuse, and explained how the saints are actually a way in which God shows his love for us, rather than, as many Protestants believe, a way of leading people away from God.

I got a signed copy of Dawn's book, My Peace I Give You, and I'm really looking forward to reading it... unfortunately that treat is on the back-burner until things get quieter at work.

I was a little tired on Monday (though probably nowhere near as tired as Dawn herself: her talk in Blackfen was her second one of the day) partly because of my start-of-term fear of oversleeping, partly because of the shock to my system after the two-week break, and partly because I had developed a stinking cold. Even so, I was absolutely determined to get a photo of myself with Dawn, and persuaded His Hermeneuticalness to take a photo of us both...

What? Well, you didn't really think I'd allow myself to appear without my mantilla, did you? And Dawn said she'd brought hers along specially...

Do go over and read Dawn's blogs - she has two: The Dawn Patrol (a more personal blog, I think) and Feast of Eden (a blog which focuses more on saints and spiritual healing).
Posted by Mulier Fortis on 9.1.13 1 comment:

Those Twelve Days Of Christmas... 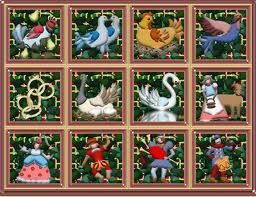 On the twelfth day of Christmas, my true love sent to me... the following delivery dispatch note.

Thank you very much for your order, received 25 December 2012. Our Dispatches Department has had a few problems in fulfilling your requirements, and it is with regret that I have to inform you that the items you requested cannot be sent at this time.

Item: Partridge/Pear Tree Combo (1) The partridge is a ground-nesting bird, and has refused to consider arboreal transportation of any kind. It is also not the correct time of year to uproot pear trees, which are very susceptible to frost.

Item: Turtle Doves (1 pair) We did have one pair of turtle doves. Unfortunately there was a slight misunderstanding in the Cookery Department (Cook was very tipsy after a few pre-prandial sherries, and she's reading Alice in Wonderland at the moment!), and the turtle doves were mistakenly converted into a mock-turtle-dove soup. You will, I am sure, be comforted to know that the soup was excellent.

Item: Hens, French (3) The delivery of this item has been delayed by a dispute by lorry drivers at Calais. I can assure you that you would not have enjoyed this item, as the eggs generally smell of garlic and onions, with a certain je ne sais quoi sometimes identified as Galoises and felt berets.

Item: Birds, Calling (4) There was a slight misunderstanding here when the Chief Packer misread the delivery schedule, and attempted to send four call girls... fortunately the error was detected in time. As soon as the birds have been trained to use the latest in Nokia handsets, we will be sending them along to you.

Item: Rings, 24 Carat (5) Unfortunately, our stock of rings has been sorely depleted due to the depredations of a certain individual, last seen riding a white horse in the vicinity of Banbury Cross. She was described as a "fine lady," but, actually, must be a bit of a Chav to wear rings on all of her fingers...

Item: Geese, a-laying (6) Not much chance with this item either. Geese have proved very popular this Christmas (must be a new recipe out by Delia) and you won't be able to get your paws on one, a-laying or otherwise, for love nor money.

Item: Swans, Swimming (7) Madam, I do believe that you are, as they say, "extracting the urine." Swans are the property of the Crown, and while I might have been able to find one on the QT, seven is pushing your luck. Added to which is the problem of transportation. I mean, have you considered the size of one of those blighters? Some of them have a wingspan of six feet, and how, exactly, you were expecting us to be able to find a water tank large enough to accommodate all of them without drawing down the wrath of the animal rights lobby for cruel and inhumane transportation of live swans totally escapes me.

Item: Maids, Milking (8) Due to the latest edict of the Department of Agriculture, Food and Fisheries (or whatever they're calling themselves this week) movement of livestock and all unnecessary movement of farm workers has been banned. Milkmaids are farm workers according to EU directive 21478/07. Blame blue tongue and foot-in-mouth disease... well, wouldn't you have a blue tongue if you put your foot in your mouth? I suppose it might be red tongue if you changed the colour of your socks...

Item: Dancing Ladies (9) I'm afraid that we're right out of dancing ladies as well. King Herod put in a bulk order back in June (he got the taste for that sort of thing after his niece did a demo) and stocks have not been replenished.

Item: Lords, Leaping (10) Don't hold your breath. From what I've seen on the Parliamentary Channel, you'd be lucky to get a couple of the old codgers to attend anything, and they'd be pretty moribund. Not inclined to leap. Sleep, yes. Leaping is definitely a no-go area. The insurance wouldn't cover it. Health and Safety. Someone might have a heart attack.

Item: Pipers (11) Have you taken complete leave of your senses, woman?? Have you ever actually heard anyone play the bagpipes?? It's the most ghastly din imaginable... and then to request eleven of the wretched things. No, please believe me, I have your best interests at heart when I say that this item has been discontinued.

Item: Drummers (12) Well, we could possibly dig up Phil Collins, and that chap from Queen... but twelve might be a bit difficult. Maybe you'd prefer a nice tambourine...
Once again, sincere apologies for any inconvenience this may have caused. We look forward to receiving your order next year.