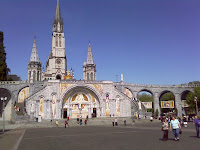 We had an excellent talk at St. Mary's, Chislehurst this evening, given by Dr. Adrian Treloar, all about miracles at Lourdes, from a medical point of view.  I knew about the case of Jack Traynor, but there were some fabulous details which I hadn't heard before, like the Brancardiers running after Jack as he made a dash for the grotto to give thanks... and then backing off as they realised that, technically, he shouldn't have been able to walk, let alone out-run them!
More details can be found via the Faith & Family website (under publications) - the CTS have generously given permission for the pamphlet about Jack Traynor to be made available here, as it is out of print.
Adrian directed one or two comments at the youngsters sitting by his feet as he delivered his talk, and I was delighted to discover that I'm not the only one beset by misunderstandings...
"What did Jesus do, children, as he went around Palestine?" was followed by a triumphant exclamation: "He cured the leopards!"
Posted by Mulier Fortis on 28.11.08 2 comments:

It would seem that I'm having a bit of a run on misunderstandings this week. I posted a comment on Facebook declaring my sudden desire to indulge in a portion of chips. Knowing that I have many American friends on Facebook, I felt that I needed to specify that the chips in question weren't the American "potato chips" (known as "crisps" this side of the pond) but were "fat fries"!
Karen, that Oceanic Gem, thought I meant to say "French" fries. Definitely not. I do like French fries, especially with a good steak, but what I wanted yesterday were not French fries. No, I wanted good, old-fashioned British fish-and-chips (without the fish) and smothered in salt and vinegar.
So, to bridge the cultural divide, please pay close attention.  Below, you can see French fries... 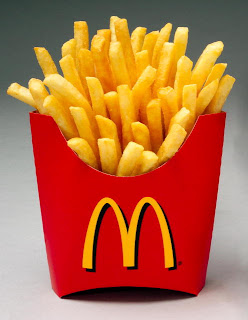 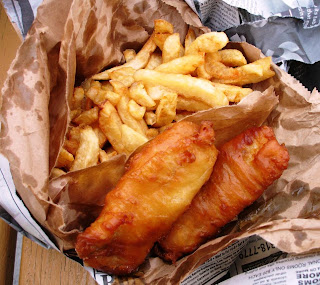 As I said, ditch the fish... but I just couldn't find a good picture without the fish accompaniment!
And while I'm on the subject of food and all things American, Happy Thanksgiving to y'all !
UPDATE: No, no, no... the chips below are definitely NOT the same as the fries above.  The chips below are squishy and soft, and fluffy on the inside, almost to the point of being "soggy"! Fries, on the other hand, are crispy, crunchy (and hopefully slightly fluffy on the inside!) 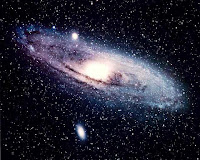 Teaching can be full of unexpected pitfalls...
I was attempting to teach Year 7 all about space, the Universe, the Solar System, and other related topics. Unfortunately, there are a lot of misconceptions held by children, and I decided to start by explaining that our Sun is a star, and our Solar System has eight planets (yes, Pluto has now officially been downgraded by the National Curriculum) but that there may be other solar systems out there in the Universe, etc. etc...
It was all going swimmingly (or so I thought) until a couple of hands went up... 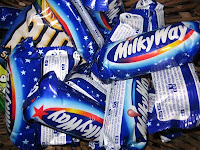 "Miss, isn't Galaxy much bigger than a Milky Way... "
Unfortunately, I couldn't resist following a brief diversionary route past the relative merits of Galaxy and Dairy Milk, but I think it was all sorted out in the end...
Posted by Mulier Fortis on 26.11.08 4 comments:

If You Should Be Thinking Of Buying Me A Present...

...I want one of these, to assist me in my plan to become a traddy womynpriest! Shame that it doesn't seem to include biretta, chasuble, amice, maniple, burse or chalice veil, but I'm sure I can get those from somewhere... 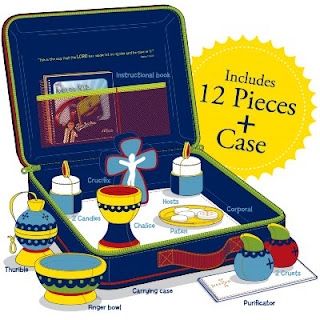 Twitch of the mantilla to the Curt Jester.
Posted by Mulier Fortis on 26.11.08 5 comments:

Well, not while there's no-one else to open the catfood pouches...

Twitch of the mantilla to Jackie of Mother's Pride for the link!
Posted by Mulier Fortis on 24.11.08 7 comments:

I'm still sulking.  But while I'm waiting for people to realise that I'm sulking (and to recognise that the quickest way to get me to stop sulking is to feed me chocolate) I thought I'd post a little joke. Just for a change, it doesn't involve blondes...

One day God was looking down at Earth and saw all of the bad behavior that was going on. So he called one of His angels and sent the angel to Earth for a time.
When he returned, he told God, "Yes, it is bad on Earth: 95% are misbehaving and only 5% are not."

God thought for a moment and said, "Maybe I had better send down a second angel to get another opinion."

So God called another angel and sent him to Earth for a time.

When the angel returned he went to God and said, "Yes, it's true. The Earth is in decline: 95% are misbehaving, but 5% are being good."

God was not pleased. He decided to e-mail the 5% that were being good, because he wanted to encourage them and give them a little something to help them keep going.

Do you know what the e-mail said? 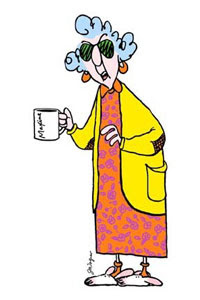 Okay, I was just wondering, because I didn't get one either.
Posted by Mulier Fortis on 23.11.08 5 comments: 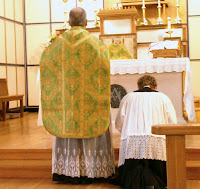 In addition to attending the Extraordinary Form of Mass this morning, I also attended the Ordinary Form this evening. Having read the liturgy suggestions on the website for the Bishops' Conference of England & Wales (check it out HERE, but it really ought to carry a health warning!) I was expecting something a little special for National Youth Sunday...
Alas!  I was to be very disappointed. Not only did Fr. Tim say the Mass with his back to the people (thus preventing me from checking whether he had donned a red clown nose for the event) but he also omitted to do the comedy skit after the sermon on the subject of sheep and goats.
Of course, the last straw for me was the fact that I didn't get given any chocolate (Fairtrade or otherwise) ... not even a sniff of a cocoa bean appeared after Communion.  Think of the loss of opportunities to exhort the congregation to avoid over-filling kettles and to use low-energy lightbulbs...
So now I'm sulking...
Posted by Mulier Fortis on 23.11.08 9 comments: 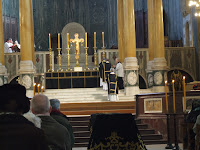 Saturday was as wonderful as I anticipated.  Mass in the parish as usual, followed by Exposition for the Holy Hour and finishing up with Benediction, then a mad dash to a local school to pick up one of the servers, and drop him and Jonathan (who was to be Assistant MC at the Requiem) off at the station.
As usual, I eschewed the inconveniences of public transport, and opted for the inconveniences of personal transportation: being Saturday, there wasn't much traffic on the route I took up to Victoria (I carefully avoided many of the shopping areas by opting to travel via the Blackwall Tunnel and the Embankment) and there wasn't a congestion charge to worry about either.
However, I nearly fell foul of Murphy's Law: two lorries crashed just beyong the Limehouse Link, which meant that what was normally a five minute journey through the Link actually took 25 minutes. Despite this, I still arrived in Victoria with half an hour to spare, and even managed to locate a free parking space (thank you, St. Joseph!) just beside the entrance to the Cathedral! 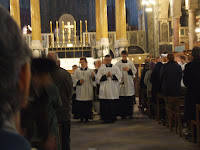 Blackfen was well represented at the Mass: both in the congregation and on the Sanctuary itself. I had the privilege of meeting Alison Davies afterwards, as Colin (I think that was his name), a friend of hers, introduced me. Alison has spoken out on many pro-life issues which affect disabled people.
Colin said he recognised me from the blog: I found this amazing, first of all because I am always surprised to meet people who read the blog (other than friends I've sort of blackmailed into reading it), secondly, because my profile picture only has the back of my head with a mantilla (and there was hardly a shortage of mantillas in evidence at LMS events), and finally, because I was actually wearing a completely different style of mantilla from the one in my profile picture! Spooky!!
Quite a large crowd of us found our way to the Buckingham Arms, a rather nice hostelry in Petty France.  The main recommendation for this pub appears to be the Real Ale available.  Alas, having the car with me meant that I was restricted to Coca Cola... at least I was spared any teasing about drinking Novus Ordo Eurofizz (aka lager!)
Later on, a few of us decided that we needed to eat, and we went to the Ha Ha Bar & Grill in Cardinal Place.  There's a trendy (and noisy) bar downstairs, a swanky restaurant bit upstairs, and a more informal bistro-pub bit (also upstairs, but round the corner from the restaurant bit.) This strikes me as a very sensible arrangement: not everyone wanted to eat, but we wanted to have drinks available and to be able to chat in comfort.
All in all, a very enjoyable day.
Posted by Mulier Fortis on 23.11.08 2 comments:

Do You Have Gaps in Your Knowledge?

Twitch of the mantilla to Karen, who also scored zero gaps.
Posted by Mulier Fortis on 23.11.08 3 comments: