Which Bit Of "Impossible" Is So Hard To Understand...?

My blog had its fifteen minutes of fame after I posted a cri de coeur about the dreadful dress-sense of your average womynpriest candidate (masterfully answered by Fr. Z, as it happens), in which I was bemoaning the dearth of tasteful Roman vestments being sported. But now I wonder if there is a case to be made for cause and effect? A ridiculous suggestion, but no more ridiculous than the womynpriests' claims to being ordained to the Catholic priesthood...

In his 1994 apostolic letter, Ordinatio Sacerdotalis Pope John Paul II declared definitively that it was impossible for the Church to ordain women to the priesthood. Despite this, twenty years later, there are women who continue to claim that they have been validly ordained. And, as I noted before, they all seem to wear the most awful stuff.

This leads me to wonder what it is about the wearing of floaty, outsize polyester and/or tie-dye vestments which renders the wearer incapable of rational thought?

One cannot rationally claim that one is ordained to the priesthood of the Church when that Church declares that it is not so. For ordination to be valid, the recipient has to be male. Gender reassignment surgery doesn't cut it either (sorry, couldn't resist!) The Church has stated that this reservation of the priesthood to men is to be held as a definitive truth of the Faith by all of the members of the Church. For any rational human being, that ought to be enough.

Then there is the irrationality of claiming that the ordination is valid because they have a "calling to the priesthood." Lots of men feel called, but that doesn't mean it is so: the years of formation in seminary are also a time of discernment. If the Church doesn't confirm the feeling of vocation by ordaining you, then no amount of "feeling" will make you a priest.

Is it just that they feel like they can do the job? After all, I have a scientific background, and a keen interest in medical matters. I am frequently able to tell my mother what she's likely to be suffering from, if she tells me her symptoms. I always wanted to be a doctor. If I really and truly feel that I have a calling that way (and lots of people have told me that I'd be good at the job) does that allow me to set up as a GP? No rational individual would be surprised when my excuse of "feeling that I could do the job" was thrown out of court.

The claim that it is all about equality for women is equally irrational. I firmly believe that men and women are equal but you won't see me asking any men if they have a spare Tampax. I also do not consider it to be a matter of inequality that men cannot give birth, and I, talented though I am, cannot father a child. The basic, incontrovertible truth is that men and women are different. To say that different means unequal is irrational.

What the womynpriests (and their supporters) appear to believe is that it is necessary to be a priest in order to be able to exercise power and influence in the Church, and this is what they mean by "equality". The mistaken idea that the priesthood is purely about power and influence is one of the strongest arguments against letting such women be ordained - it is clericalism of the worst kind.

Finally, there is the irrational "outrage" or, worse, "deep sadness" when these women go through a mock ceremony (which is sacrilege in itself) and get a letter telling them that they have been excommunicated. The bishop concerned hasn't excommunicated them, he is merely pointing out the consequence of their actions. They incurred an automatic excommunication. In other words, they separated themselves from the Church and the Sacraments when they went through the ceremony.

So, given the absence of any rational arguments justifying the womynpriests' claims to being validly ordained, and given the preponderance of tie-dye and polyester floaty vestments seen in photos of womynpriest types, I can only assume that the attraction of wearing ghastly vestments erodes the ability to think in a rational manner.

Admittedly, a correlation does not prove a cause, but it's better to be safe than sorry. Let it serve as a salutary warning to any priests who have predilections towards such gruesome attire on the sanctuary. And remember, Reverend Fathers, every time you say Mass without a maniple, God kills a kitten... So watch it, or I'll send the Cardinal and Monsignor round to sort you out... 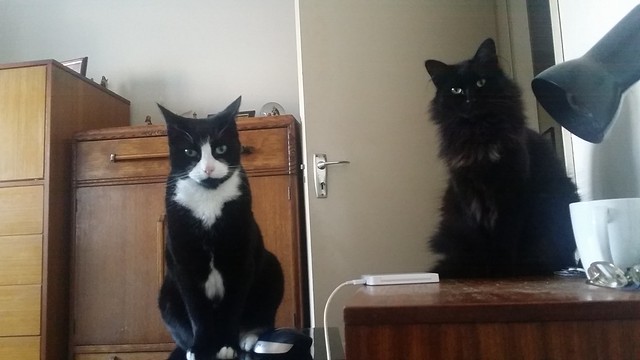