The Good Counsel Network does stirling work with mothers in crisis pregnancies - they provide the same sort of support that the Sisters of the Gospel of Life provide through the Cardinal Winning Pro-Life Initiative.
As well as practical support, they also believe in the power of prayer and fasting. Fr. Tim has mentioned before that he often goes up to their offices to give them Benediction.
Each month they have a National Day of Prayer and Fasting for Life: this month it will be on May 22nd, the Feast of St. Rita. It's not always possible to support every good cause financially, but praying for an end to abortion and euthanasia is something everyone can join in.
Fasting
Fast from all food except bread and water for the day
Or
Fast from a particular food or luxury, e.g. chocolate, alcohol, cigarettes, TV.
Fast from whatever you can given your state of health etc, but make sure it is something that involves a sacrifice to yourself.

Prayer
We are asking people to say a Rosary (or an extra Rosary if you say it daily already).

You could also offer an extra effort such as going to Mass (or an extra Mass) on the day, or going to Adoration. You can even pray before a closed tabernacle if Adoration is not available near you.

For further information on the days of Prayer and Fasting contact:
The Good Counsel Network on 020 7723 1740 or email them.

An Apology From The Suppository... (No, Not For THAT Article...)

Damian Thompson reports that The Suppository has found itself having to print an apology.
They printed a letter which reported a service, supposedly celebrated by euphemistic monsters, in which unconsecrated hosts, after Eucharistic Prayer II had been recited over them, were consumed as "Holy Communion."
No explanation of the reason for publishing this letter was given. Fr. Ray Blake speculated that it might be a snide attack on Bishop O'Donoghue, or a way of promoting the idea that the sacramental priesthood is not necessary any more!
Comments in Fr. Ray's com-box quickly brought certain discrepancies to light - so it would seem that the Blogosphere does have its uses, not to mention being a pretty quick way to check for accuracy in any reports. Within five days of the post going up on Fr. Ray's blog, the letter had been de-bunked.
The apology is grudging in the extreme:

"We published the letter in good faith, but it has since emerged after lengthy enquiries that the address in Grasmere, Cumbria, given on the letter does not exist, which causes us to be concerned that the letter might not have been genuine."

Might not have been genuine??? And lengthy enquiries?? A simple phone call to the parish priest concerned (or even a visit... Cumbria's not that far away!) would surely have revealed the obvious? Elena Curti was quick enough to visit Blackfen to try and dig up some dirt for her nasty hatchet-job.
I have to say that the thing which had me crying with laughter, literally doubled over, was a comment on Damian's post from an individual called "Crouchback":

"Why don't they apologize for the shiny front cover, which is no use in the dunny, believe me I've tried..." 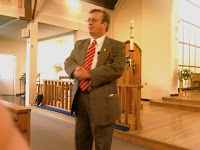 This evening our parish was visited by Raymond de Souza, EWTN host and lay apologist, on his UK tour.
The topic he spoke on was one which is dear to my heart: whether Jesus' presence in the Eucharist is real or just "symbolic". For any Catholic it's a no-brainer, but I was keen to hear what arguments Raymond would put forward.
I was a little unsure how the talk would go: I half expected a "typical" evangelistic type, rather like Scott Hahn... don't get me wrong, I enjoy reading Scott Hahn's work (in small doses) and admire his zeal, but it's all a bit exhausting, and doesn't translate well in the UK. There is a basic lack of understanding as to how far the de-Christianisation of Europe has progressed: America, for all its "separation of Church and State" is far more steeped in religion than the UK.
In fact, Raymond de Souza proved to be an inspirational and fascinating speaker. He spoke without any notes, but he never seemed to stray far from his central message: that Christ had not been speaking figuratively when he said that a person must eat his flesh and drink his blood in order to inherit eternal life. I had already heard the arguments Raymond used, but his delivery was fresh and engaging, and he gave the topic an intensity I hadn't experienced before.

After a brief service of Benediction, there was an opportunity to buy some CDs and books - I managed to get a copy of Henry VIII's Defence of the Seven Sacraments, which Raymond de Souza had edited and supplemented - it comes with 2 CDs inside the cover. I knew that Henry VIII's treatise had defended the existence of the seven Sacraments (Luther maintained that there were only two, Baptism and the Eucharist) but I hadn't realised that Henry had also written arguments defending the primacy of the Pope. I look forward to reading the book.
The full itinerary of Raymond de Souza's tour can be found HERE, and if you are in the vicinity, I would really recommend making the effort to hear him in person. If you can't make any of the events mentioned, you can buy CD recordings of many of his talks.
Finally, I was delighted to make the acquaintance of Bernadette Bevans (of BevansInc.), who is responsible for co-ordinating Raymond's UK tour, and Gary Bevans, who painted the reproduction of the Sistine Chapel ceiling in the church of Goring-by-Sea, West Sussex. The Bevans are also responsible for producing DVDs on various topics, such as the life of St. Edmund Campion and St. Philip Howard, through their company, Mary's Dowry Productions. Pop over and check them out!
Posted by Mulier Fortis on 15.5.09 10 comments:

Video Excerpts From The Jubilee...

For those of you not fortunate enough to have been there, or even for those who were there, but fancy a reminder of how magnificent it all was, here's a video of the highlights... 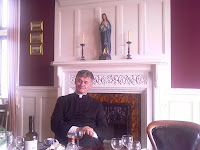 It was Fr. Ray's Silver Jubilee yesterday, and to celebrate, he had a Mass in honour of the Carthusian martyrs. I wasn't entirely certain that I'd be able to go, as driving there and back would be a bit too much for me (I'm still anaemic, and tire very, very easily) but the offer of a lift back afterwards made things easier.
I checked out train times, and discovered that there was a fast train, taking just an hour and one minute, from London Bridge, and I thought that might be my best option, as it would be less crowded than one of the "commuter" trains. However, when I got to London Bridge, there were various announcements about a Brighton train which was supposed to stop at all the stations, but which, due to its being 20 minutes late, would now not be stopping at Gatwick Airport.
Not sure about the reason for the delays, I thought that it might be a good idea to get on the first train which presented itself at the platform, as the station was getting more and more crowded with disgruntled passengers with suitcases (obviously the Gatwick crowd.)
At the first stop, a further announcement was made: the train was so late that only one further stop before Brighton was to be allowed, and all other passengers had to get off. Delighted to discover that my train was now, effectively, the "non-stop" to Brighton service, I settled down for a brief nap.
A taxi from the station deposited me at the church of St. Mary Magdalen. I couldn't see any "reserved" signs, so plumped myself down in a front pew with an eye to taking photos. Fr. Ray spotted me and gave permission to snap away, though I was (jokingly) told there would be a strict embargo until after he'd put some photos on his own blog... 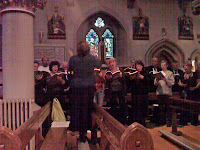 There were two choirs: the parish choir and the Brighton Chamber Choir, and the music was a heady mixture of plainchant and polyphony. Afterwards, I met Clare, who leads the parish choir (and sings in the Brighton Chamber Choir) and was able to express my appreciation. Clare isn't a blogger, but she is good friends with Leutgeb, with whom she will be going to Solesmes in the Summer. The choirs were busy practicing when I arrived, and I got a sneaky shot in early... 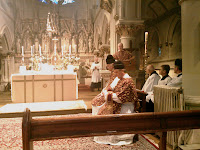 The Mass itself was magnificent. Fr. Seán Finnegan preached an excellent sermon on St. John Houghton and the Carthusian martyrs; very stirring stuff. The sermon was a reflection on the last words of St. John, "Good Jesu, what will you do with my heart?" and from there considered the vocation of the priesthood. This passage from the sermon reminded me why we, the laity, owe so much to our priests, and why little signs of love and appreciation for our priests (such as the Chrism Mass Demo) are so important:

"I have always been very struck by the story of Blessed Noel Pinot, a martyr of the French Revolution, who, having been arrested when about to celebrate Mass, ascended the scaffold to the guillotine dressed in the same Mass vestments, reciting to himself the same words we said today 'Introibo ad altare Dei'. The mother of St. John Bosco said to him on his ordination day: 'Remember, son, that beginning to say Mass means beginning to suffer.' These words come home to me and strike at my conscience, because I would far rather have a nice dinner with brandy and cigars than suffering, but I increasingly think that I can never really be worthy of my priesthood until I pour myself more entirely into it. There is nothing worth having that does not carry its price label, and the price label for following the Lord is imitating Him in all things or, as He said Himself, taking up our cross daily. The question is not what do I want (the answer to that is straightforward: I’ll have an easy life, please, involving some nice dinners in agreeable company) but what does He want. In fact, 'Good Jesu, what will you do with my heart?' Because whereas my little wants are rather petty and contemptible, His are wonderful beyond comprehension."

Fr. Tim Finigan posted an account of the Mass, and some other photos. Laurence England (referred to as "Bones" because of his blog title) was also present, and I narrowly escaped having my photo taken outside the presbytery as I left. I believe that a few photos have made their way to the New Liturgical Movement blog, along with a close-up of the vestments. Here are a few more photos that I snapped during the Mass... 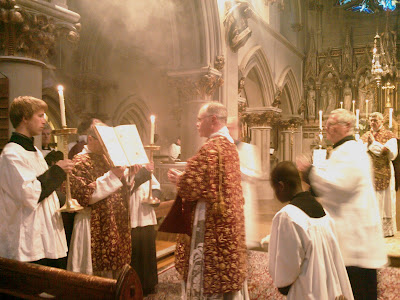 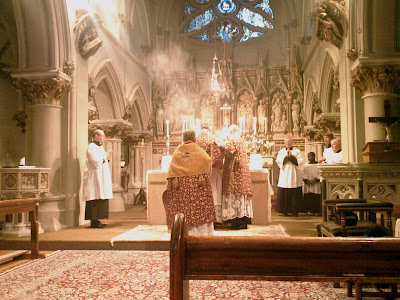 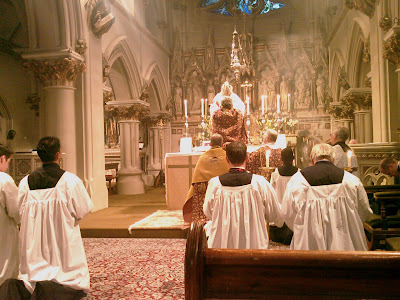 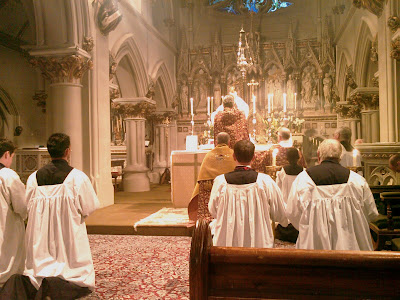 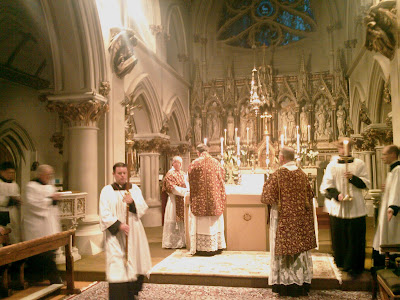 Heartfelt congratulations to you, Fr. Ray on your Silver Jubilee, and thank you for accepting Christ's call with such generosity.
Posted by Mulier Fortis on 13.5.09 7 comments: