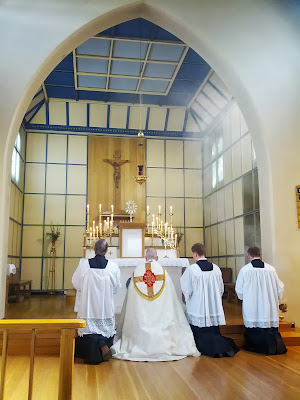 At Benediction this morning in Blackfen, we had a prayer for peace in Syria. At the Missa Cantata which preceded it, Fr. Finigan reminded us that the title of Our Lady Queen of Peace was a very old one, despite only (relatively) recently being added to the Litany of Loreto, and that we should pray to her for a miracle. Given the tangled knot of Middle Eastern politics, it occurred to me that we might also pray to Mary under her unofficial title of Our Lady, Untier of Knots.

There was also a Votive Mass for Peace in the parish this evening. I get the distinct impression that Catholics all over the world have responded to the Holy Father's call for a day of prayer and fasting. I have seen reports that 100,000 people gathered in St. Peter's Square for a Peace Vigil.

It doesn't appear to have been deemed important enough to feature on the BBC's website...
Posted by Mulier Fortis on 7.9.13 1 comment:

A Shoddy Piece Of Journalism...

A cheap and nasty distortion of one of Fr. Ray Blake's blogposts has been doing the rounds of the mainstream media - obviously some people think the traditional media "Silly Season" is still up and running, and can't find anything better to do than rehash a poorly-written and even more poorly-researched blurb (I hesitate to call it an article) from a local rag.

As the piece has been picked up by a few different sources, I am reposting Fr. Blake's response (as he asked on his blog.)


"I was saying that the poor, the really poor, turn our lives upside down. I know the local paper pays peanuts and expects its journalists to create stories in order to get onto the news networks but this is just a malicious and deliberate misrepresentation.

"It is very interesting to see what a disreputable journalist can do with a few carefully chosen adjectives. I didn't 'condemn', 'complain', 'blast' etc, and I am pretty certain that some of his other quotes are not my words, especially not, 'test my holiness', I don't speak like that, 'only God is Holy'. Though I admit in an informal moment I might question the marriage of the parents of someone who disrupts the worship of an entire congregation, especially if they consistently steal from the church or other poor people.

"It is interesting to see how an unscrupulous journalist can so easily put an entirely different slant on a simple theological reflection, presumably even basic Christian concepts are beyond the comprehension of some.

"Well, journalists are obviously as messy as the poor; except unscrupulous journalists can do more damage. Perhaps Mr Gardner might like to help on our soup run, it doesn't have to be 365 day a year, once a week would be fine, providing he treats our clients with respect, or maybe he could take Jason or Daryl or Pawel or Dawn out for a cup of coffee or a meal, or just come a clear up the next time someone comes in and vomits or bleeds all over my kitchen because he is drug or has been beaten up.

"Maybe next time I run out of money I could tap him for a few quid when some vulnerable 17 year old girl needs to top up her phone to speak to her mum because her boyfriend has beaten her up or she needs a roof over head because she is sleeping in a tent and it is just few degrees above zero and she is vulnerable, or maybe the next time I am arranging a child's funeral and someone comes to the door in need of someone to talk because they are suicidal I can send them round to Bill's place so he can spend a couple of hours listening to them.Here, to, I am neither complaining, blasting, lambasting or anything else, just asking.

"I understand Mr Gardner's little piece has been syndicated internationally, perhaps kind readers might, if possible post my response."

Fr. Blake is charitable enough to ask his readers to pray for the journalist who was attacking him, and for all in the media.

An excellent critique of the shoddy item in the Argus has already been written by Caroline Farrow. I really cannot improve upon it, so I recommend you go and read it for yourselves.
Posted by Mulier Fortis on 6.9.13 1 comment: