New Liturgy For The Ordinariate... 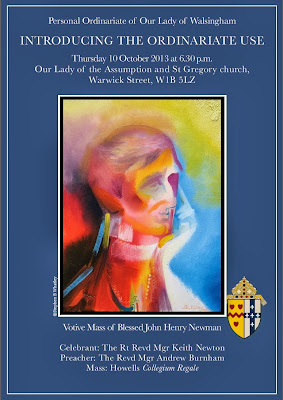 A new text has been devised for use by the Personal Ordinariates – the structures established by Pope Benedict XVI which allow former Anglicans who wish to enter the full communion of the Catholic Church to do so whilst retaining aspects of their spiritual and liturgical traditions, described as “precious gifts” and “treasures to be shared.”

The liturgy – the work of a special commission established by Rome and now approved by the Holy See – includes material from the 1662 Book of Common Prayer as well as the Roman Rite. It will be unveiled with a Mass on Thursday, 10 October at 6:30 pm, to be followed by a media launch organised by the Friends of the Ordinariate charity, at the Church of Our Lady of the Assumption and St Gregory, Warwick Street, Soho.

The Mass will be celebrated by the Ordinary of the Personal Ordinariate of Our Lady of Walsingham, Monsignor Keith Newton, and the preacher will be Monsignor Andrew Burnham, Assistant to the Ordinary and a member of the commission which devised the liturgy, known as the Ordinariate Use. Music, drawn from the English tradition, will include Howells’ Collegium Regale.

Mgr Burnham said: “For some time, the Ordinariate has had its own liturgy, approved by the Holy See, for marriages and funerals and the Customary of Our Lady of Walsingham already provides a daily office in the Anglican tradition. But the introduction of this new Ordinariate Use is very important because it means that we now have our own distinctive liturgy for the Mass which brings to the Roman rite beautiful Anglican words which have been hallowed for generations. It gives the Ordinariate unity and a corporate identity.”

The Roman Rite in both its ordinary and extraordinary forms remains available for use by Ordinariate priests and there will be no requirement for them to adopt the Ordinariate Use. However, all Ordinariate clergy will be expected to familiarise themselves with it. Some priests are expected to use it regularly, while others – especially in parishes with a large concentration of “cradle” Catholics in the congregation – may only wish to use it from time to time.

Congratulations to the Ordinariate of Our Lady of Walsingham on completing this great work.
Posted by Mulier Fortis on 26.9.13 3 comments: 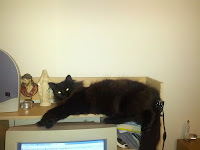 Unlike Jeffrey Bernard, Furretti was not intoxicated. She has, in common with most cats (especially longhairs), a tendency to hairballs. However, throwing up hairballs is quite a neat operation, and the results tend to come out in a long, neat tube of matted fur...

This was very different.

The poor puss jumped onto my chest of drawers last night, opened her mouth and promptly released a stream of fluid - not quite projectile vomiting, but pretty close! It landed all over my old iPhone (which I use as a sort of iPod for playing audiobooks.) Fortunately, it doesn't appear to have suffered any ill effects... the cat, on the other hand, was looking very woebegone...

Today she appears to be feeling much better...
Posted by Mulier Fortis on 25.9.13 6 comments: