The Forest Has Stopped Murmuring...

I'm still trying to catch up with my blogging backlog, but Flickr has decided it's on a go-slow at the moment. However, I did manage to sneak in one photo I took last Sunday.

Fr. Michael Brown, of Forest Murmurs fame, popped down to see Fr. Briggs in Chislehurst, and Fr. Finigan was invited for lunch. As chauffeur, I got to join them for coffee, and, with an eye to my paucity of blog activity and resultant drop in readers, I promptly demanded a blogging scoop - the three priests together in a photo. Trying to decide where a good place for a photo might be, we plumped for a group around Michael Davies' grave. Michael Davies was a stalwart defender of the TLM in the days before Summorum Pontificum...

Fr. Brown has moved parish, and so has stopped blogging on Forest Murmurs. Readers will be delighted to hear that he is continuing to blog at Gateshead Revisited.
Posted by Mulier Fortis on 14.9.13 1 comment:

I have been attending to gaps in my subject knowledge, ably instructed by Blackfen's senior MC.

Yes, I finally got to see my first real cricket match - at the Oval, no less! To my shame, I see that this was actually two whole weeks ago, but the start of term is always hectic and I just haven't had the time or energy for any blogging.

Surrey were playing Derbyshire, and since Surrey hadn't won a single match all season, they were facing relegation - much to the chagrin of the MC, who likes Kent and Surrey to be in different leagues so as to maximise his available venues.

As a member of Surrey's Cricket Club, Jonathan was able to watch from the Pavilion. Our arrival was later than planned due to the closure of the Northern Line tube for the ubiquitous "engineering works" and so we arrived just after the players had returned from lunch. We went to the restaurant for our own lunch (having hot-footed it from Blackfen's Saturday morning devotions), and found ourselves at a table right behind the bowler's arm - a spectacularly good position.

With the MC at my elbow to explain some of the tactics (calling for a new ball after 80 overs... or not), conventions (not moving from your seat until the end of an over) and gestures (lifting one's thigh and slapping it means a leg bye) I found myself completely hooked, and almost forgot to eat... but only almost, because lunch was excellent.

During tea, there was a pitch invasion as spectators went for a walk around... this is, apparently, quite normal.

Jonathan took me on a tour of the Pavilion, and I had a look in the museum and the library. I was told that a cricket pitch is one chain in length... and a chain is 22 yards or 1/80th of a mile - just over 20 metres.

One particular cricket ball in the museum had a very amusing inscription beside it...

"This ball in the Bridegroom's hands obtained 4 wickets in 1 over. May the happiness of Mr. & Mrs. Richardson's married life abound in the same degree."

When the day's play ended, things were looking pretty dicey for Surrey, but they were still in with a chance. On the Sunday morning the situation became very grave indeed. Fortunately, Surrey managed to pull themselves together and ended up winning the County Championship Match by four wickets...

You can see a selection of photos on my Flickr page...
Posted by Mulier Fortis on 13.9.13 1 comment: 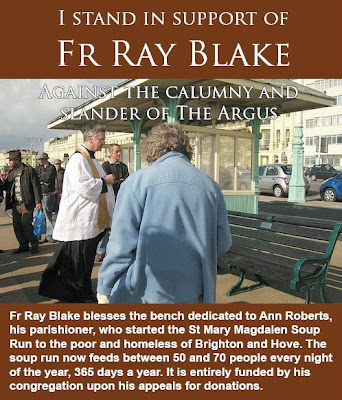 The poster says it all, I think. You can read the background in a previous post I wrote last week.

Twitch of the mantilla to Bones for the poster!
Posted by Mulier Fortis on 13.9.13 No comments: